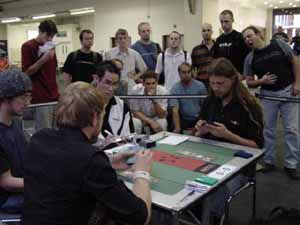 Yann Hamon is piloting the only deck with Forests to make day two, and he’s made it all the way to the top four, pretty impressive. In his way is Eivind Nitter. He’s won a European Championships and a Pro Tour but never a Grand Prix. He’s hoping to change that. Hamon’s deck is an Explosive Vegetation hybrid with more random never-before-seen-in-constructed cards than your average limited deck. It is, however, meant to be very good at beating WR control. Not good for Eivind.

Nitter won the coin flip but it was Hamon with the first play, a Lightning Rift. Nitter’s hand was a bunch of cyclers and an Astral Slide. Yann on the other hand had cyclers of his own, a Silklash Spider and a Cabal Conditioning. This card has been the most commented on feature of the deck. It’s a seven mana situational discard spell, but it spells doom for any kind of control deck.

Hamon was light on land, forced to mainphase cycle a Slice and Dice to find his fourth land. Hamon has three maindeck Break Asunder, which could well be the reason that Nitter slow played his Astral Slide, holding it back in the hope that Yann would be forced to cycle it so as not to miss any land drops.

Hamon again mainphase cycled a Slice and Dice to find his sixth land, a Temple of the False God. He played a Wall of Mulch and passed. Eivind end step cycled twice to give him something to work with as all he had drawn so far was more cyclers, he took two Rift hits to the dome.

Eivind returned a previously cycled Eternal Dragon to his hand and passed, the Wall was sacrificed at the end of turn. Yann passed straight back. Nitter Vengeanced away the Rift, and did the same to a freshly cast Spider the following turn, commenting that he did not have a clue what he was doing in this matchup.

Hamon kept the pressure up, dropping a Silvos, Rogue Elemental and Rift, leaving a Forest untapped. Nitter drops a Rift of his own and an Astral Slide, before sending the turn back to Frenchman, leaving Wing Shards mana open.

Hamon Broke Asunder Nitter’s Slide but did not attack respecting the possible Wing Shards. Eivind’s hand was another Slide, a Shards, a Exalted Angel and a Dragon. He made the Slide. It was also disenchanted. The Silvos still held back.

Eivind got bored of the waiting game and made the Angel face up leaving four mana open. Damage from Rifts and Wooded Foothills left the life totals at 17-14 in Yann’s favour.

It was Hamon’s turn to get aggressive. He had found the one Swamp in his library and slapped the Cabal Conditioning onto the table. Nitter thought for a while before casting Wing Shards. His bluff did not work, Yann moved into his attack phase and sent Silvos into the Red Zone.

Eivind regrew a Dragon and swung back with his Angel leaving the life at 13-10. The Silvos smashed again and was joined by a Spider. Nitter untapped, drew, stared at his hand desperately for an answer and, not finding one, conceded. 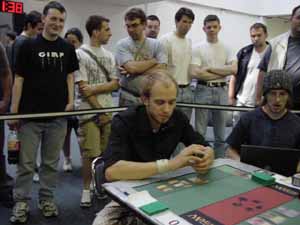 Nitter brought out all of his Spark Sprays, one Rift and one Slide for a Decree of Annihilation, a Plains, a Temple of the False God, two Akroma, Angel of Wrath and an Oblation.

Hamon took out almost all of his anti-creature spells for a Rorix Bladewing, three Fierce Empath, a Kamahl, Fist of Krosa, a Cabal Conditioning, two Explosive Vegetation and a Contested Cliffs.

Nitter came out of the blocks sprinting, or at least as fast as is possible for RW control. A turn three morphed Angel made an appearance before being flipping over the next turn and swinging. Eivind’s hand had a Rift that he had neglected to cast on turn two, a Slide and an Akroma alongside the usual land and cyclers. The Slide came down the next turn and the Angel continued to rampage uncontested.

Hamon’s turn four Explosive Vegetation was followed by a Silklash Spider. Nitter calmly slid out the arachnid in Yann’s end step and punished with the Angel. He added a Rift to the board. The life totals read 32-8 to the Norwegian.

Yammon the cast a Break Asunder targeting the Rift. No response. He played another Break Asunder on the Slide, again with no responses from Eivind. Hamon passed. At the end of turn, Nitter Oblationed the Spider.

The Angel continued its rampage, knocking the Frenchman to four. Eivind made a Forgotten Cave as his seventh land, lamenting that it came into play tapped meaning he could not cycle his Decree of Annihilation to win the game there and then.

Hamon could muster no additional defense on his turn. Nitter drew his eighth land and made Akroma, just to make sure of his victory.

Nitter’s opening hand was four land, a Dragon, a Decree of Annihilation and a Lightning Rift. Hamon kept three land, a Vegetation, a Break Asunder, a Rorix and a Fierce Empath. He had to cycle the Break Asunder on turn two to make sure that he would find his fourth land so that he could cast the vegetation.

The Empath came down on turn three, finding Kamahl. Nitter answered with a Rift. The Empath nipped in before the Frenchman ramped up with the Veggies. Nitter just doubled up his Rifts.

A turn five Rorix smashed Nitter to twelve. The Norwegian was forced to cycle a Dragon in the endstep to find land, unable to activate his Rifts. He untapped and thought long and hard about what tot do next. He was in trouble and he stared at his hand of Plains, Secluded Steppe, Decree of Annihilation, Decree of Justice, Dragon and Starstorm searching for a solution. He made the Plains and said go. 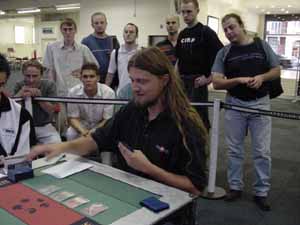 The Rorix and the Empath tottered into the Red Zone. Nitter cycled the Steppe activating only one Rift to kill the Empath. He left himself enough mana to cast a hopefully top decked Wing Shards. It was not to be and the Rorix halved his life total. Yann Broke Asunder one of Nitter’s Rifts and passed the turn. Eivind cycled the Dragon, sending two damage at Yann, knocking him to eighteen. Whilst Nitter was tapped out, Hamon cycled a Krosan Tusker, finding his one Swamp.

The fashion prodigy’s frantic cycling had paid off. Akroma’s Vengeance swept the board clean. Hamon replied with the Kamahl he had fetched earlier, leaving two mana open.

Eivind thought hard. Then he thought some more. With seven land untapped he passed the turn, deciding not to Starstorm the Kamahl in his turn.

Hamon untapped gleefully. He turned all four of Nitter’s Plains into 1/1s using Kamahl and then Starstormed for one. Nitter responded by Starstorming the board clear, going to three land in the process. He also cycled a Starstorm.

Nitter made a Plains and did nothing. Hamon dropped a Rift and the Norwegian responded by cycling a Decree of Justice creating one soldier. Hamon then made a Silklash Spider.

Nitter laid a Forgotten Cave and ended his turn, sitting uncomfortably on six life facing a Lightning Rift. The Spider attacked and the soldier chumped. Nitter then had the rest of his hand shredded by a Cabal Conditioning. He topped an Astral Slide but it was not enough. The Spider swung in relentlessly and two cycling cards finished the job.