Semifinals: Your Move Games vs. Dark Side of the Moon 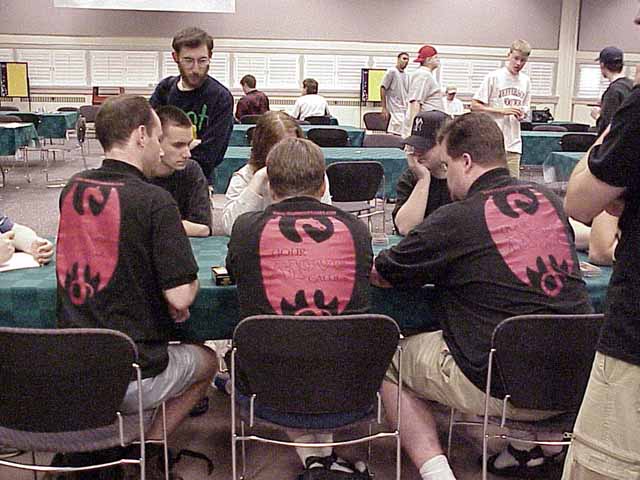 This was a matchup between two teams from New England, the world famous Your Move Games and the lesser known solid local players of Dark Side of the Moon, who even Darwin Kastle had to agree were "good guys." Having lost the die roll, Dougherty opened the first pack for Your Move Games. It was clear what the two best cards were, and Dougherty took Thunderclap while Humpherys took Ramosian Lieutenant. Dark Side of the Moon then made a strange decision, seemingly trying to force Kastle into blue: They passed him Thwart and Balloon Peddler for the wheel, giving Halpren a Silverglade Pathfinder opposite Humpherys, Lynch took Counterspell opposite Dougherty, and Tautic took Kyren Sniper opposite Kastle. After the wheel, Tautic took Seismic Mage, Lynch took Disenchant ad Halpren took Rampant Crawler, basically finishing off the pack. They explained after the draft that Halpren is a beatdown player, so they took the cards they took to play to their strengths, even though it required a sacrifice of card quality. Similarly, Lynch wants to play Blue/White control if he can. 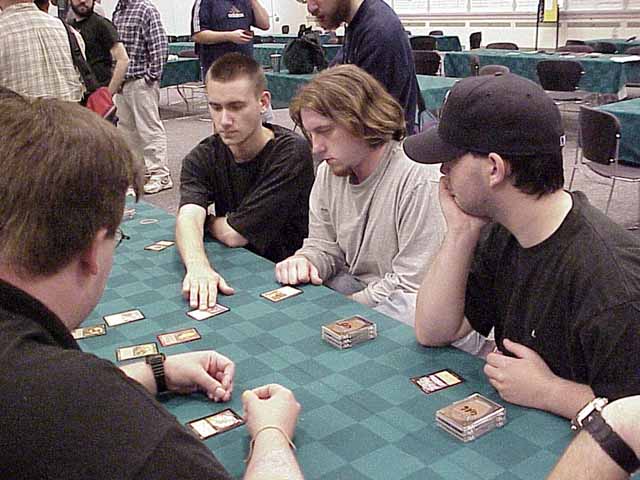 Second pack, Humpherys was looking at a power card in the one color he did NOT want to see: A Volcanic Winds. Humpherys actually pointed at Primeval Shambler and not the Winds, daring to suggest passing one of the set's biggest bombs rather than split red or abandon a first pick, but you don't pass Winds and there wasn't really a doubt what would get taken. The problem was that they had not practiced splitting Red between seats B and C before. That Shambler went to Tautic, Lynch got the Waterfront Bouncer and Halpren got Giant Caterpillar to stay in beatdown mode, passing Darwin Drake Hatchling and Bog Smugglers and Dougherty Wild Jhovall and a Squall his teammates seemed to feel was important. Tautic took away a Crossbow Infantry so Lynch cold have Steadfast Guard in what looked like a White/Blue deck. Halpren got a Dark Ritual.

Pack three contained four top level cards, Shock Troops, Lunge, Thermal Glider and Sever Soul, so it tied down Dark Side's color decisions. They gave Halpren Sever Soul putting him into Black/Green, Lynch Thermal Glider putting him solidly into Blue/White, and Tautic Shock Troops to put him Red with a Primevil Shambler. That Lunge went to Dougherty, and otherwise Your Move also seemed to have no choice, with their colors more or less determined: Humpherys got Charm Peddler, Dougherty also got Tiger Claws and Kastle got Trade Routes and Deathgazer. Humpherys took Sandstone Needle in case he needed it to help cast Volcanic Winds. Lynch's Cloud Sprite was the most relevant card left. 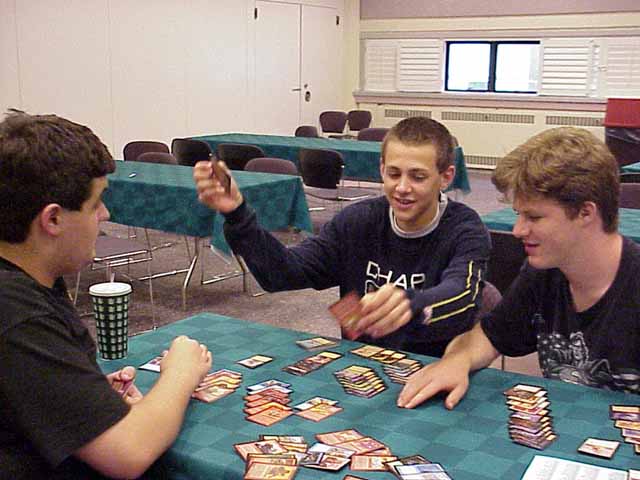 Pack four the best card Lynch could take was a Muzzle, although Halpren got a Delarich. That left a Highway Robber for Kastle, and Your Move made the decision to put Humpherys into real red along with his Winds by giving him Thunderclap to give Dougherty the card he wanted for his matchup, Tremor, which probably would have come back. The wheel was Deepwood Ghoul and Cackling Witch, and the rest of the pack was distributed to its natural owners. Pack five had both Haunted Crossroads and Snuff Out for Halpren's Green/Black deck, and he didn't even hesitate to decide on the Crossroads, nor did his teammates. Kastle therefore got the Snuff Out, the Invigorate went to Dougherty, and Humpherys got Last Breath and after Dark Side got a shot at the pack he got Disenchant. That left Deepwood Ghoul for Tautic and Devout Witness and Blockade Runner for Lynch. The last pack of MM, Dougherty started to look like a possible three color deck or Black/Green for a short period, as he took Undertaker and had just picked up Unmask in pack five and had only two very splashable cards in red. Meanwhile, Kastle took Maggot Therapy and Humpherys got Ramosian Captain to go with Lieutenant, and Dark Side picked up some solid cards: Rushwood Herbalist and Rushwood Dryad for Halpren, Thwart and the anti-beatdown if shaky Revered Elder for Lynch, and Deepwood Ghoul and Battle Rampart for Tautic.

Nemesis opened with a bang: Kastle opened Stronghold Zeppelin, Rathi Intimidator, Blinding Angel, Arc Mage, Defender en-Vec, Flowstone Crusher, Treetop Bracers and Wandering Eye. Wow. Counterdrafting was clearly futile, so he took the Zeppelin for himself. That left an Intimidator for SDH, a Blinding Angel for Lynch and an Arc Mage for Tautic, which still left two great cards for both Humpherys and Dougherty before the pack died down. Next pack gave Dark Side three more impressive cards: Blastoderm, topple and Battlefield Percher, but this time Your Move had to be content with Kastle getting an Oraxid and Cloudskate and Humpherys getting a Chieftain en-Dal. The third pack of Nemesis Lynch got a Defiant Falcon and Tautic picked up Seal of Doom, and Humpherys took Laccolith Warrior. Your Move than appeared to make a rare mispick, with Dougherty accidentally taking a Daze at the last second. Kastle then picked up Wandering Eye, and when Halpren wheeled the Dark Triumph and took away Sivvi's Ruse, that Daze ended up being taken away from Kastle. 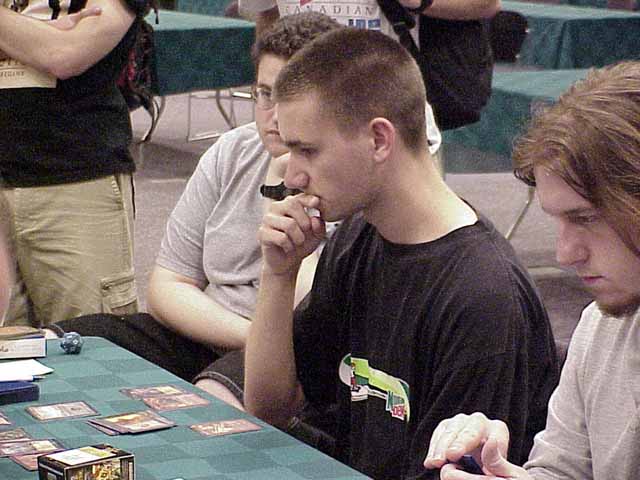 Pack four of Nemesis altogether too much thought was put into a first pick Seal of Fire for Tautic, and Humpherys got a Lightbringer, Dougherty a Laccolith Grunt and Kastle a Seal of Removal. Halpren got a treetop Bracers, and Lynch got to wheel Flint Golem and the more important Oracle's Attendants. Pack five Your Move had to distribute Massacre, Rupture, Plague Witch and Lightbringer. They seriously thought about giving Dougherty the Massacre among other divisions, and while I write this they're discussing among themselves what they should have done. Dougherty actually had hoped specifically to open Massacre for himself regardless of color issues, but it turned out that Kastle needed it even more. Looking back, they think maybe they should have passed Lightbringer; it was very difficult pack. In the end, Humpherys took Lightbringer, Dougherty took Rupture and Kastle got the Massacre. After that, Halpren took Nesting Wurm and then took Skyshroud Claim over a then counterdrafted Seal of Strength, while Lynch also picked up Daze. Tautic got the Plague Witch and a Parallax Dementia. In the last pack of Nemesis, Dougherty was happy to take Ancient Hydra and Kastle was happy to take Seal of Doom, but that did pass Belbe's Armor (which went to Tautic) along with a Defender en-Vec for Lynch and an Intimidator for Halpren. Humpherys got to wheel Submerge and Plague Witch.

The first pack of Prophecy contained the worst of the Avatars, the Avatar of Might, whose alternate casting cost is virtually impossible to trigger, and a Silt Crawler. There was a Rhystic Lightning that was going to go to Humpherys, with the team back to splitting red, so Dougherty had to choose between the green cards. Thinking it was better in this particular situation, he team agreed he would take the Avatar, although many observers thought this was a very strange choice. That Crawler went to Halpren along with a Soul Charmer, and Lynch picked up Diving Griffin and Windscouter. Tautic got only Greel's Caress and Wall of Vipers. The next pack rewarded Humpherys for his decision to support the Volcanic Winds: He was given Latulla, Keldon Overseer (and later in the pack received Latulla's Orders). Tautic got Keldon Berserkers, Lynch drafted Coastal Hornclaw and Halpren picked up Chimeric Idol. Kastle took away Trenching Steed and got Steal Strength, Dougherty got some of the creatures he needed with Pygmy Razorback and Vintara Snapper. 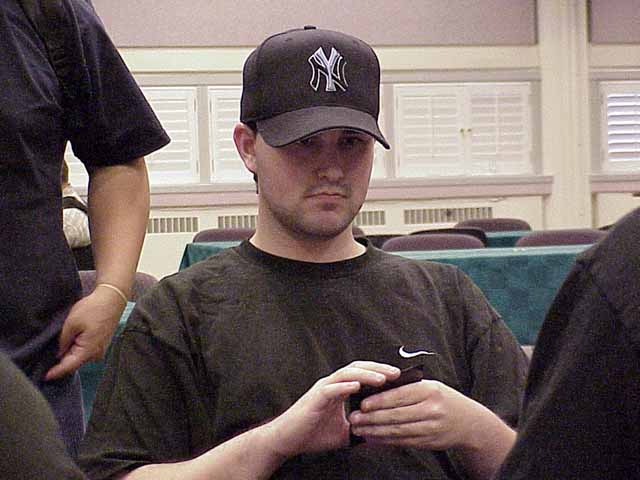 The third pack of Prophecy there was a Troublesome Spirit that was clearly Lynch's, an Agent of Shauku for Halpren and then a Hollow Warrior left for Tautic. Kastle picked up Stormwatch Eagle and Spiketail Hatchling, Dougherty got Ribcage Spider and Thrive, and Humpherys took a Rhystic Lightning (which Dark Side decided was no Hollow Warrior or Agent of Shaku) and took away a Shade. Pack four was a classic example of not looking far enough down the line in a pack. Lynch decided in the next pack that he could not afford to let the other team get a Flameshot, so he took it, although they then gave Tautic a Fault Riders. This still left Rhystic Lightning for Humpherys and a Fault Riders for Dougherty, although Dougherty passed it up for Avatar of Will (Tautic got it), which I also found quite odd, especially with Tautic wheeling. Dougherty got Wild Might and Humpherys got Mine Bearer on the way back.

Pack five, Halpren took a first pick Noxious Field. Kastle got a Withdraw hat was even better than usual in his deck, Dougherty got another Ribcage Spider and Humpherys took Spur Grappler. The last pack was huge for them: Spiketail Drake for Kastle, Lesser Gargadon for Dougherty and Copperleaf Angel for Humpherys. Not that the rest of the pack was bad. Tautic got Fen Stalker and Fault Riders, Lynch got Mine Bearer and Alexi's Cloak, and Halpren got Wild Might and Death Charmer.

Still, the draft had clearly not gone well for Your Move. What happened? Partly, the Volcanic Winds took the team out of position and out of the realm of their practice, giving them less shots at cards than they would like, with them unable to abandon either red card despite no real pressure to support either. Beyond that, they flat out also got out opened over many packs, and Dark Side took full advantage. 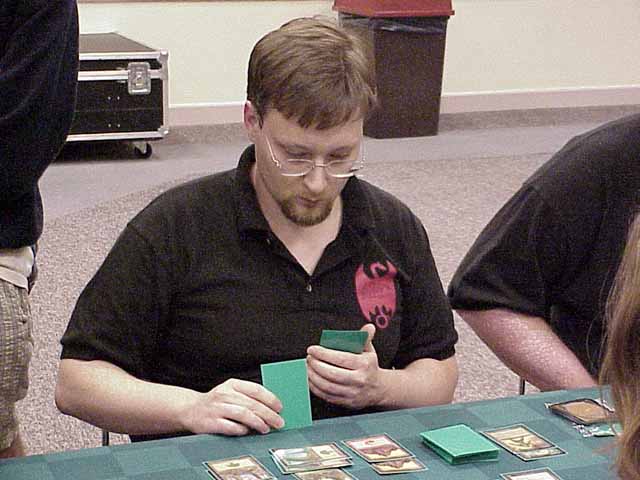 Dougherty's match against Lynch ended first. The first game seemed at first to be a god argument for Thrive, as it turned a Laccolith Whelp and a Ribcage Spider into much better attackers, but Dougherty's inability to draw fat other than Avatar of Might (which he didn't have the mana for) allowed Lynch to win with a Blockade Runner with Magenta's Boon on it while his creatures easily stalled the ground. Second game, Dougherty had an Avatar in hand but again could not assemble much power onto the table, and got overrun by an army of creatures. Kastle's match against Tautic was next. The Massacre in his deck became crucial, with Tautic not being able to play around it very well despite a Wandering Eye alerting him to it in game one. However, used Soul Strings to get back his Battlefield Percher and another creature, and later gave it a Flaming Sword. The other creatures traded off, but Kastle had no way to deal with the Percher. He was using the Trade Routes to desperately try to find Maggot Therapy for it, but doing so prevented him from emptying his hand and the board became even worse. Second game, Kastle failed to get his second blue mana until too late, and Tautic's creatures went the distance. Humpherys was in game two when the match was decided. In game one, he stalled using Invulnerability on a Chieftain en-Dal and a few small creatures while he got out Latulla and used it to do the last ten damage.