That's what Morgan Karlsson and Olle Rade were thinking when Rickard Osterberg asked them to join him on a trip to Oslo. The purpose was to play a team qualifier. The guys were qualified anyway, but figured the extra practice and potential money wouldn't hurt. Rickard ended up being persuaded by Lovre and Jake to give it a shot with them, and theyswon. Rickard felt comfortable with the new team, and decided to play with them instead, leaving his homeboys without an invite. The Original Slackers went 4-2 in the Team Sealed and then 5-0 in Draft, and here they are now in the semifinals.

Osterberg's opponent this round, Eugene Harvey, is widely respected as a Limited player. He also plays piano, but that is all I know--maybe there is an equally interesting story behind their team. He thinks that his white-black deck has an edge over Rickard's white-red due to superior speed, but is a bit worried about the late game. Rickard believes himself to be the favorite since he has better Clerics and a more stable deck. A problem for Rickard, though, is the fact that Eugene's Daru Sanctifier and Aven Liberator work well against triple Pacifism.

"English only, please," Gary Wise told his Swedish-speaking opponents before the playing started. Interestingly enough, those were the exact same words spoken to Gary by the English deportation agency some months ago. 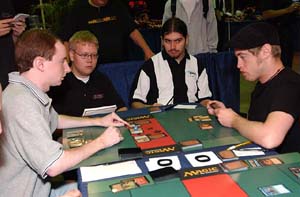 Eugene played first, and Rickard took a mulligan. Eugene dropped Farseer and morph, while Rickard had a morph. Eugene played Stoic Champion, and Rickard followed with another morph. The next turn Eugene all-out attacked; morphs blocked the morph and Champ. After damage was on the stack, Eugene flipped the Liberator to save itself, and his opponent showed a Zombie Cutthroat. The Swede was dangerously low on life facing a 3/3 and a 2/3 flier, but managed to dispose of the former with a Crested Craghorn. Scales beefed up the Liberator and enabled it to do double-duty on offense and defense. Rickard dropped a Dive Bomber but was still in serious trouble.

But then something weird happened. Eugene stopped hitting with the 3/5 flier and merely put Lingering Death on the Bomber. Wipe Clean took care of that, and the 3/4 kept attacking. Eugene was just standing there while Rickard dropped more guys in the form of Daru Spiritualist and Aven Redeemer. The American had way too many lands, and Rickard put out an Aven Farseer.

Harvey tried to Misery Charm away Rickard's fresh Aven Redeemer, but Daru Mender put an end to such nonsense. Eugene drew a Starlight Invoker and started using it, but Rickard was hitting for more and more every turn. As Cutthroat, morph, Farseer, and Dive Bomber brought it on, the Liberator finally joined the action by blocking. Osterberg morphed out a Lancer to do more damage.

Eugene was going low on life and showed true desperation by playing a face-up Sanctifier. This was due to the opposing Farseer, but still not the play one wants to make against the original Pacifism deck. Rickard Pacified the Liberator and attacked lethally with four fliers.

After the match, Eugene said that he forgot the Liberator's total toughness of 5 and would have won the game by playing correctly. But now it is time for the second game.

Both players played Farseers, and then the Birds traded in the air. Eugene had a Husk, but Rickard merely cycled a Forgotten Cave during his turn. Eugene had no more creatures, but he did take care of a Redeemer with a Misery Charm. Osterberg got the mana for a Dawn Elemental, and Eugene played Gempalm Avenger. Then both players dropped Redeemers.

Rickard got some damage in with the Elemental and hard-cast Daru Lancer. At that point, Eugene once again ran out of steam and just sat there waiting. Redeemers made the combat steps seem a lot less intensive. Eugene dropped Scales on the Redeemer and played a morph, showing that he was holding back the Scales while waiting for an answer to a possible Pacifism. The Swede hit with the Elemental, which got blocked by the Redeemer. Damage went on the stack, and then Rickard targeted the Redeemer with Dive Bomber. Sanctifier took care of the Scales, but Eugene had Defender of the Order to save his guys.

At this point, both Mike and Gary have lost their matches, so Eugene scooped it up.