Lovre won the roll (2 to 1 on a 20-sided die) and decided to go first. This would turn out to be very significant, as both openings were textbook starts with similar tempo, and that put Crnobori, on the play, firmly in the driver's seat. The Swede had the first action of the game on turn 3, a morph. Turian was quick to match it with one of his own, but when Crnobori played a Goblin Goon on the following turn, the importance of the die roll victory became clear. It's simple math--the guy with the Goon wants to be on the play.

The game continued to unfold with Turian on the back foot. His turn 4 play of Nantuko Husk was trumped by Erratic Explosion. Mike was nonchalant.

"I'll just hope you miss," said the Potato. Unfortunately for Mike, Lovre's deck served up a Branchsnap Lorian to fuel the Explosion, and the Husk hit the bin just before the Goon crashed into the Red Zone, sending Turian to 14. Crnobori continued to pour on the pressure after combat, playing out a land and a Gempalm Strider. He had a morph, the mighty 6/6 Goon, and Gempalm Strider against Mike's board of one lonely facedown man. 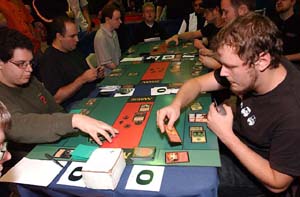 Turian's play was to put down a Smokespew Invoker and suit it up with Dragon Shadow before passing the turn to Crnobori, who immediately attacked with everything. Mike, knowing that he had to be rid of the Goon sooner rather than later, ran the double block, letting Gempalm Strider and morph through and trading Invoker and morph for the 6/6 monster.

Alas for Turian, Lovre's morph was Venomspout Brackus, and the unblocked creatures bashed for 7, cutting Mike's life total in half. The CMU side of the board was looking grim for sure--no creatures and 7 life facing down a 5/5 Beast and his Elf buddy. The only action that the blue-black mage could come up with on his turn was a Mistform Shrieker, and Crnobori's 7-point Torrent of Fire ended it in short order.

Mike didn't show any discouragement, and updated his team-mates matter-of-factly: "I lost game 1." There were still games to go, and anything could happen.

Both players kept their opening seven, and Mike opened with a turn 2 Wretched Anurid on the play. The red-green side of the table replied with a slightly smaller but no less speedy Gempalm Strider on turn 2, and the race was on!

Turian in for 3 with the Anurid, morph. Go.
Crnobori in for 2 with his Strider, morph. Go. 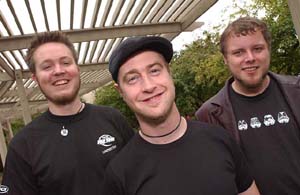 Back and forth they went. Turian added a second morph to his side (with a blue mana available) and when the Swede played a pre-combat Sledder and attacked with the team, he was quick to block the Strider, revealing his morph to be Wall of Deceit after damage was on the stack. As quickly as it had arrived, the Sledder hit the bin to facilitate the survival of the 2/2 Elf. Still pouring on the pressure, Crnobori added a second morph to his side after combat and passed the turn.

Turian wasted no time in sending his remaining morph and the Wretched Anurid into the red zone, scoring 5 more points of damage. He also played a Deathmark Prelate, which not only threatened to kill off a big fatty or two, but would allow him to get rid of his Wretched Anurid should the life loss become too much to bear.

Lovre untapped and lapsed into deep thought. With four land in play, four cards in hand, and two morphs, he had a tough decision to make with regards to how best to use his turn. The two morphs were Branchsnap Lorian and Venomspout Brackus. His hand was a second Brackus, Torrent of Fire, Krosan Tusker, and Patron of the Wild. Life totals: Turian 9, Crnobori 7.

Eventually he decided to cycle the Tusker for a second mountain and play a face-up Patron of the Wild, "pinging" Mike for one. Lovre's plan was clear--knock the enemy to 7 with Anurid damage, unmorph Venomspout Brackus, and Torrent the face. He passed the turn, and when Turian attacked with Wretched Anurid and morph, he blocked the Anurid in such a way as to leave it alive. His Gempalm Strider did try to take down Turian's morph, but it was Mistform Shrieker. That meant that the better part of Mike's mana was occupied for the turn, and he passed it back, still on 8 life.

Continuing to bank on the Torrent kill, Lovre simply said "Go," on his turn, planning to unmorph the Brackus sometime during Mike's. Turian made an excellent read of the situation though--he knew that the Anurid had been around long enough, and if it had to go, it might as well take down a morph with it. With help from the Deathmark Prelate, the Mighty Potato sent both his Anurid and, yes, Venomspout Brackus to the bin, throwing a big monkey wrench in the Swede's victory plans.

The Shrieker attacked to bring Crnobori down to 4 life, and Screeching Buzzard was added to the table, representing lethal flying damage on the next turn. Lovre needed a Plan B, and he needed it fast! His draw, however, yielded no miracles. He could only pack up his cards and start to shuffle.

Turian: "Did you have Torrent of Fire in your hand? (chuckles) You have to be honest!"

A pivotal game in a pivotal match. For the third time in as many contests, there were no mulligans from either player. Turian kicked things off with a turn 2 Withered Wretch on the draw. Though the Swede could have played out a Krosan Warchief on his third turn, he decided to take the pressure off first and played out an expendable morph, which traded with the Wretch on Turian's third turn. Turian replaced it with a morph of his own.

With more mana sure to be available on the following turn, Crnobori felt more comfortable about playing the Warchief, and did so. Turian bashed for 2 and added another morph to his team, leaving blue mana untapped to represent Wall of Deceit. Little did he know, however, that Lovre was about to come over the top with a 6/6 Glowering Rogon (revealing Branchsnap Lorian and Krosan Vorine) on his turn 5!

Hoping to put some pressure on before the big monsters could get out of control, Mike cycled Backslide at end of turn and cast a Mistform Shrieker to take the battle to the skies. He passed it back and braced himself for the Rogon assault, which was almost immediate. Turian to 14. Crnobori compounded his opponent's problems by playing a Krosan Vorine with regeneration mana up after combat. 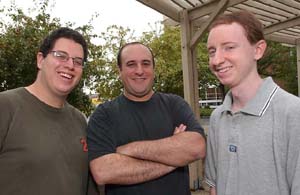 Turian bashed for 3 in the air and played out a potentially dangerous Tribal Golem (tapping all his mana), but when the Swede made the correct provoke play with his Vorine to kill off the Shrieker, denying the Golem access to the Zombie creature type (and thus, regeneration against the Rogon), things were looking dire for the former Team Pro Tour Champion. Turian went to 8, and Crnobori continued to be relentless, tapping out to play a morph after combat.

Mike was short on action, that much was clear. He could only lay a land and pass the turn with his board of two morphs and Tribal Golem vs. Krosan Vorine, Krosan Warchief, Glowering Rogon, and morph. The Swede wasn't about to stop attacking now, and so the Vorine and the Rogon hit the Red Zone for the third time in as many turns, this time with provoke aimed at one of Turian's morphs. Before blockers, the morph was flipped up to reveal Riptide Survivor, and Mike ditched two useless lands before drawing three fresh cards.

One was Chill Haunting, but sure enough, Lovre had the Patron of the Wild to save his Vorine. The game was swinging out of control, and everything was coming up Lovre! Turian fell to 2, and things looked hopeless when Crnobori played yet another creature after combat--the 2/2 Gempalm Strider.

Mike had to play a couple of creatures to even have a hope of surviving the next turn, and he did do that, but one of them was Wretched Anurid--the absolute nut low of defensive creatures. Desperate times do call for desperate measures.

The Anurid would be Turian's death warrant. On the Swede's turn, all it took was the playing of Sledder and Branchsnap Lorian to seal the match. Game 3 and match to Lovre Crnobori.