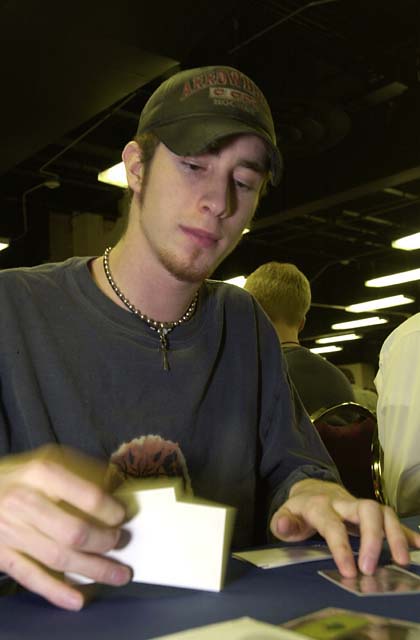 Dustin Stern is characteristically soft-spoken about his first Pro-Tour.

"I don't know hardly anyone around here."

There was a time when the average player would say something similar about Dustin.

They aren't saying that anymore.

While Dustin has been coming to the larger events for some time, until just recently only the regular Money-Draft players would even recognize him. His phenomenal success at Grand Prix Dallas and Grand Prix New Orleans has attracted a large amount of attention. With no Pro-Tour experience under his belt, the hype around this Wisconsin player is huge.

His plan for the first draft is fairly simple.

"Its Rochester. I'll try to read the table as best as I can, but I'm wanting to have beatdown."

"This draft wasn't going the way, I wanted. It picked up though in that second pack."

Dustin's draft table would be considered pretty light-weight by most players, with no big name players at the table. Dustin sat at the #4 position at the table and started into a Green/Red with no players competing for him on his right side for colors. On Dustin's left he faced a bit more competition in colors, with Green/White directly next to him, and another player competing for Green/Red.

Dustin's early picks were solid, but mostly unextraordinary. By the eighth pack, he didn't have an incredibly strong beatdown deck like he might have enjoyed. He only had five cards that would probably make the final cut in his deck, though two of them were Tribal Flames. His deck wasn't going anywhere exciting.

Then the next set of packs was broken open.

The first pack had Agonizing Demise and Armadillo Cloak. The other Green/Red player though about it for some time, and took the Cloak to begin his drift into Green/Red/White, leaving the Green/White player on Dustin's left without a clear pick. Fires sailed right into Dustin's deck, soon followed by a big temptation in one of the next picks: Blazing Specter.

This kind of dilemma happens all the time. A strong card offers a player a choice between a solid pick within their colors (Explosive Growth might have been Dustin's obvious choice), or a slight risk by jumping into another color for the possible power of the new card. Dustin took the Specter. In the next pack, he got a small reward for his choice.

He opened another Blazing Specter. "Things were going pretty bad for me until then."

As the draft continued, he pushed farther into Black, bring in a Spite/Malice (solely for the Malice), a second Fires of Yavimaya, Kavu Chameleon, and numerous strong cards to fill in the space. The last pack of the draft, he made an interesting choice. His Green/White neighbor Ken Ho could only frown as Dustin took Sabertooth Nishoba.

"I didn't want him to have another Nishoba, and I can splash it into my deck with the Quirion Elf and Harrows I'm playing. I think I'm going to do pretty well in this draft."

William Ericson's deck is an unusual White/Blue deck, with a much lower mana curve. While his high amount of Protection from Red could be somewhat problematic for Dustin, Dustin's card quality is generally much higher.

Ericson's low curve came out very quickly game one, and Dustin was slow to build his creatures. Soon, though, a pair of Ancient Kavu and a Kavu Chameleon had put Ericson on the defense, with only a single flyer able to attack. Dustin's Pincer Spider put an end to those attacks, and Ericson soon crumpled to Dustin's larger creatures. Game two was over extremely quickly. Where Dustin's deck had more than a few "bombs", Ericson simply could not match Dustin card for card.

After the match, I asked Dustin how he expected the draft to go. "I think I'm going to do well in this draft. The only person I think I'll have problems with is the guy on my left [Ken Ho]. He's got a solid two-color deck with a ton of 2/2s. He's going to come out fast and his Explosive Growths and Armadillo Cloak can make things rough. Everyone else is going to have major problems with my Blazing Specters. There's almost no burn, and no one has a Recoil, Repulse or Exclude. He might be really rough for my deck." 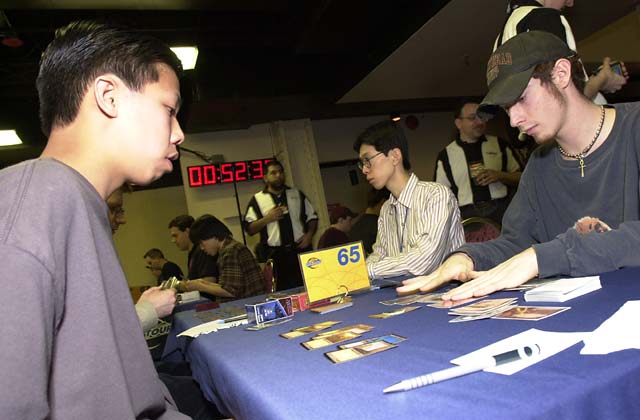 In an unexciting game two, both players drew excessive land. A single Razorfoot Griffin was in the air on Ken's side facing Dustin's Ancient Kavu and Nomadic Elf. With neither player having spells in hand, the game degenerated into a top-deck war. Strength of Unity made the Griffin 6/6, and Dustin's draw of Fires of Yavimaya would only knock Ken to 1 life. Without an answer to the Griffin, Dustin conceded to go to the next game.

In the third game, Dustin's dire predictions came true. Ken started out fast and furious, with a bunch of 2/2 creatures and an Explosive Growth tearing away Dustin's blockers. Dustin was perhaps 3 life short of stabilizing when Ken made an all out attack for the victory, sacrificing a few Nomadic Elves to get in the final damage.

With the Ken Ho matchup out of the way, Dustin expected to win this next match versus Aaron D. Jackson. The first game Aaron spent most of the time on the defensive against Dustin's Viashino Grapplers and assorted Kavu. It didn't take too long to move on to the next games.

As the next two matches progressed, Dustin's morale continued to drop. Aaron dropped a fifth turn Darigaaz the Igniter with the help of a Cameo, and Dustin was unable to bring any kind of response quickly enough to recover. The final game, Dustin became more and more dejected as he looked for a Mountain or Harrow to cast his spells in hand. It didn't take too long for Aaron's small Black creatures to finish Dustin off, and by the time Dustin found red mana, it was already too late.

"I thought I should have gone 2-1. The draft went fine at the table, and when I lost to Ken Ho, I definitely should have."

Dustin's loss was a bit frustrating for him, and he felt he should have won. Despite being disappointed about going 1-2, he was already putting this draft behind him. "I don't have much to say about that last game. I got blown out. Very unfortunate."

For the next draft, Dustin is going to again try to push towards beatdown. This strategy served him very well at Grand Prix Dallas and Grand Prix New Orleans, and he hopes that he won't be pushed out of it during the next draft. With a strong finish at his next table, he has a very strong chance to go on to Day Two.