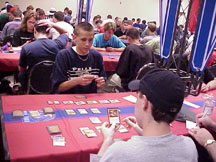 On Clarke's fourth turn, he played the Titan, prompting McCarrel to ask "What does that thing do?" After Clarke told him, he calmly untapped, cast Multani's decree and attacked with his 2/2 Chosen.

As Clarke continued to draw and drop more land, McCarrel dropped a number of fat creatures. Clarke feebly tried to hold down the fort with Capashen Knight and Sustainer of the Realm, and was even able to kill off McCarrel's Cradle Guard when he cast a Congregate, but it was to no avail as McCarrel showed Clarke the Lava Axe in his hand, causing Clarke to scoop.

Game 2 started quite differently with Clarke, who chose to play first droppinga Sanctum Custodian on his third turn. After McCarrel once again plays a third turn Chosen, Clarke solidified his ground defence with a Capashen Knight and a Field Surgeon. McCarrel plays a Yavamays Elder on his turn, but is unable to drop a land, and when Clarke plays the protection from green Voice of Duty on turn 5, it looks like its all but over.

After watching the PT points leader drop a Cradle Guard, Clarke atacked for 2 with the Voice and plays Sustainer of the Realm, another good defensive creature. After McCarrel paid for the Guard, Clarke went on the offensive with both fliers, taking McCarrel to 13.

McCarrel dropped Rancor on his Elder, making his Chosen bigger, then sacrificed the Elder to get some much needed land. The next turn, in an attempt to stop the Sustainer from attacking, McCarrel cast Plated Spider, but seemed to have no way of stopping the Voice.

After Clarke attacked with the Voice taking McCarrel down to 7, McCarrel attacked with the 9/7 Chosen. Clarke made the mistake of block with his Wall of Glare and tapping most of his creatures to prevent damage before McCarrel assigns trample dammage, and McCarrel took advantage, Heat Raying the Voice.

A few turns later, McCarrel dropped a Crosswinds, which Clarke never drew a solution to. Despite total board control, Clarke had no way of breaking through, and they eventually ran out of time, with McCarrel having one card left in his library.