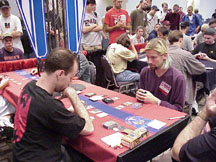 In another triumph for Your Moves Games, Dave Humpherys laid upon DKLA's Brian Hacker one of the more severe beatings he's taken in some time. Hacker's three-Rancor deck seemed strong coming out of the draft, but it proved to be no match for Humpherys' B/W Monstrocity.

Game 1 started with Hacker mulliganing to six cards. Humpherys dropped a Phyrexian Denouncer on turn two which essentially crippled Hacker's entire offensive core, which consists of many 1 toughness creatures. Hacker's hand was weak enough that he was forced to drop a land on turn four and say 'go'.

Dave's mobile Fort started beating down as Brian had no creatures to block, and Brian quickly conceded when the score stood 14-1. As dave cut Brian's deck, Brian openly prayed for an opening hand draw of Plague Beetles and three Rancors, and when he dropped a first turn Beetles, the two shared a laugh.

Unfortunately for Hacker, the second game didn't provide much for him to smile about. After Dave dropped a Denouncer second turn, he took total control of the board with Wall of Glare aqnd Mobile Fort. When Brian finally dealt with Dave's 4/4 Phyrexian Broodling and dropped his hand, Dave calmly Pariahed Brian's 5/2 Skittering Skirge, and when Pestilence hit the table, Brian scooped.

Humpherys is now 4-0 and goes on to meet either Ron Schubert, Mike Turian or the winner of the Mike Flores/Jamie Parke match.