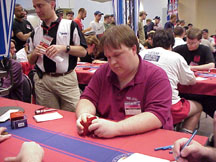 Edwards and Buehler, both players with extensive grapevine connections, were each 3-1 coming into this, the second to last round of the day. Game one started quickly, with Rudy dropping a first turn Wild Dogs, which he followed up with a second turn Priest of Titania and a third turn Treefolk Mystic. On the other side of the table, Randy was in the process of drawing four of his seven Islands while failing to find a second black source, with which he could cast one of his three Eradicates.

Second game was all Buehler as he dropped a second turn Phyrexian Denouncer and a third turn Looming Shade, but Rudy had been holding back a Miscalculation, so the Shade didn't get through.

After Edwards dropped a Marker Beetle, Randy solidified his defence with an Unworthy dead, a Fog of Gnats and a Spawning Pool, after which he Intervened a Disappear and Snaped the Mysic in response to Rudy casting Rancor. The begining of the end came when Randy Eradicated two times -- with a Vile Requiem in play. The game ended with the third in his hand.

Game three was all Randy as a mana flooded Edwards dropped Forest after Forest. Rudy's first creature was a Yavamaya Wurm, which was immediately Eradicated, and when his Metathran Elite was Swatted with the Requiem in play, he was ready to concede. Buehler goes to 4-1, putting him in good shape for the standard portion, in which he went 6-0 last year.