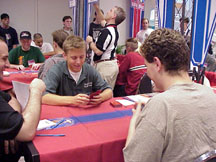 In our final match of the day, Mark Rosewater couldn't resist making PT Player of the Year Jon Finkel's match against World Champion Brian Selden a feature. With both players sitting at 4-1, it was essential for the members of Team Deadguy and Mogg Squad respectively to win this one to position themselves well for tomorrow's Standard rounds.

Game one saw Finkel, who was drawing, first mulligan down to six cards before starting. After trading lands back and forth, Selden started the action with a Reliquary Monk, which was followed by Finkel's Opal Champion. After the Monk had beat down for 2, Finkel played a Pendrell Drake, at which point Selden decided he couldn't keep his creatures back, so he dropped a Defender of Chaos.

Finkel watched as Selden Parched his Drake, but came back strong dropping a pro-red Weatherseed Fearies. Brian didn't flinch, Path of Peacing the Weatherseed, followed by a rash of creatures including Keldon Vandals. After killing the Champion thanks to Fend Off, Brian Parched the veiled Serpent and seemed to be on his way home, but Jon had other things in mind, Confiscating Brian's freshly cast Tormented Angel.

After Brian dropped an Ogre, John played Urza's Blueprints and looked to be solidifying the game, until Brian top decked his Arc Lightning, killing his own Reliquary Monk and the Troops. Killing the Monk allowed him to destroy the Confiscate, and when he dropped a Wild Colos before combat, Jon scooped.

Unfortunately, Jon started game two in the same way as he started game one, mulliganing down to six cards. This time however, he makes the first play, a third turn Veiled Serpent which Brian activates with a Hulking Ogre. Jon tried to protect his blue wall by playing Mask of Law and Grace, but after had tried unsuccessfully to cast a Tormented Angel, he cast a Path of Peace turn five and began attacking.

In order to stop the Cyclops beatings, Jon dropped Capushen Templar and Expendable Troops, but Brian burnt both away with Arc Lightning and continued the offense. After Jon drew one of his three Weatherseeds, the two sat at a standstill for a number of turns, with each player drawing a number of lands.

Jon tried to break the deadlock with a Sustainer of the Realm, but it was dispensed of by Brian's Reckless Abandon. After Brian dropped a Field Surgeon, Jon fatally cycled a Miscalculation (Brian had twelve lands in play) and then cast a Kingfisher, only to watch Brian tap out, casting a nine point Goblin Offensive. With the score at 13-8 in Finkel's favor, he tried to race with the Weatherseed and the Kingfisher and he thought he might actually win the game when he Disenchanted Brian's Pacifism, but Brian had been holding back his Parch, and when he cast it, Jon conceded.

Selden now stands at 5-1 going into tomorrows Standard portion, probably his stronger format. Finkel, at 4-2 needs to find a very strong deck if he's to make the top eight.