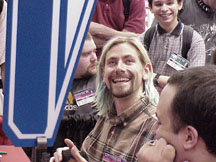 Now here's a feature match worth watching. Long time members of DKLA/Hitmen Yoo and Hacker go back a long ways, but this is only the second time they've played one another in a major event, and the first time they've played in constructed. As the two friends sat down for their match, it was apparent that this wouldn't be your usual set of duels, as trash talk and laughter came in abundance.

After winning the die roll, John responded to Brian's first turn Pouncing Jaguar with a second turn Peace of Mind, which immediately prompted an 'uh oh' from Hacker. Despite dropping a rash of creatures and attacking as aggressively as possible Brian could only watch as John Tutored and Intuitioned for his Replenish-Yawgmoth's Bargain-Abundance-Seismic Assault combo, and when he saw that John had four mana, he quickly conceded.

Game two saw Hacker get off to a faster start, dropping a first turn Wild Dogs followed by two second turn creatures. After Tutoring for an Intuition, John played a Propaganda in an attempt to slow Brian's onslaught, but Hacker's Wastelands slowed down Yoo's mana development too much, and he was unable to get the crucial fourth land he needed to go off.

Game three looked bad for Hacker when he started with a mulligan, but after casting a first turn Llanowar Elf, he was able to play Gaea's Cradle and play two River Boas on the second turn. John played a Propaganda on his turn, but Brian cast yet another Boa on his third turn and brought John down to nine with a Giant Growth. As Brian drew his next card, John seemed ready to go off, but Brian had top-decked a Giant Growth which, when cast on one of the three attacking Boas, was just enough to end the game.