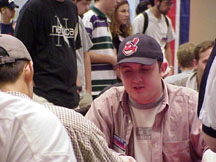 Deadguy Teammates Wollpert and Tsai got off to a fast start with their respect for one another being reason enough to forget mind gimes. Wollpert, playing an aggressive B/R deck, won the die roll and started off fast, dropping a 2nd turn Pygmy Pyrosaur. After Tsai played a land, Wollpert attcked for one and continued his onslaught, dropping a Hulking Cyclops.

On Wollpert's next turn, the Cyclops rushed past Tsai's Bouncing Beebles, but after Wollpert played a slinking Skirge, Tsai said 'This isn't going to be a very good turn for you Mr. Wollpert', and proceeded to Sick and Tired the Pyrosaur and the Skirge, followed by a Sigil of Sleep which sent the Cyclops back to Wollpert's hand. Unfortunately for Tsai, Wollpert had a surprise of his own, casting a Keldon Champion, sending Tsai down to ten.

Tsai, unable to attack with the Beebles without sending the Champion back to Wollpert's hand, had to cast a Kingfisher and sit tight, and two turns later, after the King and the Champion had traded, Wollpert's Ghitu Slinger did the job on the Beebles. Tsai then dropped an Order of Yawgmoth, but Wollpert had all the answers, deciding not to pay the echo on the Slinger, only to re-animate it with an Unearth and dropping the Cyclops, ending the game two turns later.

In game two, after Tsai chose to play first, Wollpert's first turn Ostracize of a Thornwind Faeries left Tsai with only Islands and black creatures. Wollpert then got aggressive, dropping Goblin Masons and Ravenous Rats on the next two turns, with Tsai drawing yet another Island. After Wollpert's Giant Cockroach got Miscalculated, Tsai could only shake his head as he dropped his fifth Island and cast Disappear on the Masons.

Wollpert's next turn saw him take Tsai down to 12 and cast a Viashino Outrider, and soon Lurking Jackals joined the fray as Tsai's Disappear could only hold off the onslaught for so long. Despite Tsai having Opposition, Palinchron and Dark Hatchling, Wollpert won in two straight.