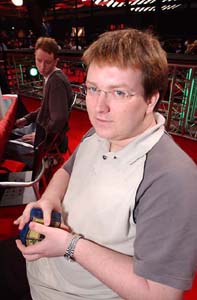 Jens Thorén hasn't been on the Pro Tour for more than two years, but he has already built up quite a reputation. With two consecutive Pro Tour top 8 finishes, the 22-year-old Swede has placed himself in the top of the field. At the same time he is a quiet guy that rarely shows a lot of emotions. "Sometimes people ask me if I have a good deck, and I say that it's bad while trying not to show that it is really good. When they go "that's the best deck ever!" that's really funny," Jens smiles, showing that he has a sense of humour behind his quiet mask.

The Umeå resident started playing Magic during Ice Age. "I was visiting some friends, they played a lot and it looked fun. So I tried it, and got hooked," Thorén explains, his story similar to that of a lot of other Magic players. Since then, he has played a lot, and after getting on the Pro Tour some two years ago, the computer science student found his grades at school dropping as he spent most of his time on the road, playing the game that he liked so much. One year ago he chose to take a break from school to play Magic professionally. "It was not really a hard decision," he says. "Every year I try to start studying, but it never works out."

With a second place finish in 2002 Pro Tour San Diego and then a fourth place finish in 2002 Pro Tour Osaka, Jens has had a pretty good first year as a professional Magic player. His team, "DM Fan Club", also finished fifth in the Team Pro Tour, and now, in Nice, Jens is attending his first Masters Series event. Long matches kept him up longer than normally before a Pro Tour, and although Jens's goal is to make the top 32, he knows that might not happen. "I have seen a lot of people do well in Masters only to scrub out in the Pro Tour, so I am prepared for that, although I hope it won't happen," Jens says.

Thorén's first draft pod turned out to be really tough. He drafted against several other Pro Players, including the Ruel brothers and Noah Boeken. In the first match of the day, he lost to the latter, but Jens was still optimistic. "My deck is really good. I was sitting next to Noah [Boeken], and I know that he never drafts green. So I took a Wild Mongrel and hoped to get good cards on the way back. I was passed a Mongrel, a Beast Attack and an Overrun, so the gamble paid off," he smiles. Thorén ended up with a strong red and green deck. "I have a tough pod, but I think I can go 3-1," he says.

Regardless of how Jens finishes in the actual Pro Tour, he will still make money on going to Nice thanks to the Masters Series. His spot in the quarterfinals secured him 6500 US dollars, and he can win even more if he manages to take his Donate/Illusions deck to a victory against Alexander Witt's Super-Gro in the quarterfinals. Jens tries not to think about the money at stake, though, when he sits down to play. "I think it would be really bad to think like that, so I just try to do my best," he explains. The Swede also thinks that it is important to focus on the Pro Tour as well. "It is hard to get on the Masters, and if you start doing badly in the Pro Tour, you won't be there anymore."

In addition, Jens likes booster draft a lot. Every Wednesday, he drafts in Umeå. The city has three Pro Tour players, Jens, Johan Sadeghpour and Anton Jonsson, and playing against other Pro Players helps keeping him focused and sharp. And every single day, he logs onto Magic Online to draft there. "I like draft in general a lot more than constructed. It is boring to test constructed. Draft is something you do for fun when you're at home and when you have nothing to do," he says, adding that he thinks that playing online has improved his playing skills even though he doesn't always play against the best players. 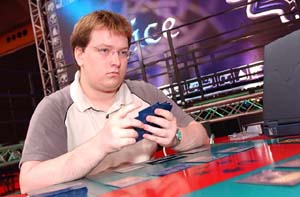 Thorén admits that he sometimes gets tired of Magic, especially constructed. "Constructed play feels like a job. Extended isn't really fun, you sit and play blue decks against each other for three hours. That's not Magic," he thinks. Still, he likes the skill part of constructed. "I think it is really hard to play control decks, but I always play those decks. There is so much to think about because of time limits and stuff, and I like that challenge," Thorén says. He misses playing just for fun, though. Back when he started playing, he sometimes joined big multi-player games with up to 15 players. Now, as the only certified judge in his area, Jens judges tournaments for kids, effectively giving up on his own casual gaming.

The Swede reckons that it is important to learn from one's mistakes. That is what he considers his strength, to be able to dissect his losses and find out what went wrong. "I see a lot of players complaining about luck and mana screws, but often, there are things you could have done differently. I try to minimise the amount of errors I do," he explains. At the same time he admits that he sometimes plays too fast, and that he is bad at bluffing. "I think that's something I should try and improve. If I draw a land and I've got nothing to play, then I shouldn't just say "go" instantly. Then people will figure out that the card I drew was bad. Instead, I should pause for a few seconds. Mind games are important, I think."

Like many other players, Jens has ambitions. Although the Swede is currently ranked second in the Pro Tour Player of the Year race, he is still too far behind Kai Budde to actually be able to catch up. One day, though, he hopes to be able to win the World Championship or to become the Pro Tour Player of the Year. "Maybe it will happen if I get really lucky," he smiles. Until then, he will just enjoy travelling, and try to improve his own game. His competitiveness is probably one of the reasons why he has become such a good player in the first place. "I am a bad loser, but I don't show it. I just try harder. If I just laugh it over and blame it on bad luck, I won't get any better," he says, displaying an attitude that might just take him the Swede to the top.