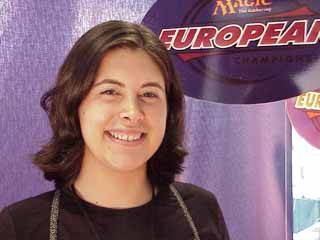 Magic is definitely a male-dominated activity, and the European Championship this year is no exception. However, Sonia Cristina Concelos Oliveira finished seventh in the Portuguese nationals to be the only female to make the cut. "This is a big tournament, and it's my first time here. I hope I did a good job," Sonia smiles.

Sonia was nervous before getting to Paris, and circumstances before the second day made her even more nervous. "We were a little bit late," she says. "So we took a taxi, but the taxi driver let us off ten minutes away from the site, it was nine o'clock and we had to run. It was so bad." Fortunately, they made it to the site in time.

The 21 year old player from the island San Miguel outside Portugal would have preferred to have more girls in the tournament. But she also admits that the boys have been nice to her. "They all shake hands and wish me good luck. And a few people I don't know have talked to me, they have said 'Hi, how are you, it's not normal to have girls here.'"

Unfortunately, some guys also tried to pull some tricks on her. "In my last match, I had a Tangle Wire, a Masticore and a Blastoderm and something else while my opponent was at five life. He had three mana only, and during his turn he didn't tap permanents for the Tangle Wire so that he would be able to drop a fourth land and cast the Wrath of God he had in his hand. He started drawing, but I went "whoa, you have to tap for Tangle Wire!" Then he looked at his hand and scooped," Sonia says.

She doesn't really think the boys are afraid of losing to her, but she is still certain that they don't like it. "In the first games, I heard someone say 'Oh, a girl, I've won!' Then we played, he made mistakes and I won. It's very cool to beat the guys. Some are very nice, but sometimes one or two of them are rude, and those matches are really good to win. Then I show them that we are good players," Sonia grins.

The Portuguese liked the draft a lot. "It was cool. I think it was a fine experience, and it was not at all like when I draft in my Magic club," she thinks. Sonia did run into some problems in the draft, though. In the second draft, she was in the middle of a game when a judge approached her and told her that her deck was illegal. "He said I had only 39 cards. I was 'you sure?' But he said that the game was over. Afterwards, I wanted to count, and we counted together. There were 40 cards on the decklist, and there was a big confusion. The head judge said we had to start over again. We got extra time, but ended up 1-1."

Sonia brought four Standard decks, but she didn't really know which deck to play. The night before the Standard portion, she figured out that she wanted to play Sligh, but all her friends were playing red, and she didn't have enough cards to play that deck. Wanting to go to sleep, she looked through her decks and chose an Angry Hermit deck because it was complete with a sideboard. "I made some last minute changes, I took out some cards and added four Tangle Wire. They were good, they gave me an extra turn or two where my opponents couldn't cast things. And it won me at least one game."

Sonia started playing about two years ago, but she already has a pretty decent Grand Prix finish from Madrid when she ended up 39th. And she really likes playing. "I like to see the vast things we can do to the decks, to find the right combinations. And I like to play and have fun. Some of the guys here seem som stressed," she says. Sonia just walks around the site smiling and looking happy, carrying her Piggyta, a lucky pig that "helped" her to get to the Female Invitational, to qualify for the Portuguese Nationals and to qualify for the European Championships.

And maybe it can help her qualifying for a Pro Tour event. Sonia is definitely continuing to play Magic. "I'd like to go to Worlds and of course win," she laughs. That is just a dream, though. But she would love to go to a Pro Tour and not to lose too much. "And I'd like to get a good result here," she says before she and Piggyta heads over to the playing field for another match.