s the first stage of Day Two draws to a close, there is a great deal on the line for most of the teams in the tournament. While some teams, such as the powerful Belgian and French squads, were able to lock up their advancement after only two rounds of play, most were not so fortunate. In some situations, there is a convoluted list of contingencies that require every match in the pool to finish before the advancing teams can be determined. For a couple of matchups, however, things are far simpler: win, and you're in.

While Israel and the United States battled in one of these do or die matches under the lights and cameras of the stage, Estonia and Croatia quietly toiled away at Table 2, embroiled in their own match with the winner advancing to the final stage of play. Last year, at the inaugural World Magic Cup, both teams were able to advance past this first stage, with Croatia advancing as far as 5th place. Both teams return two members of their successful national squads, and all four are in play during this final Team Sealed round. 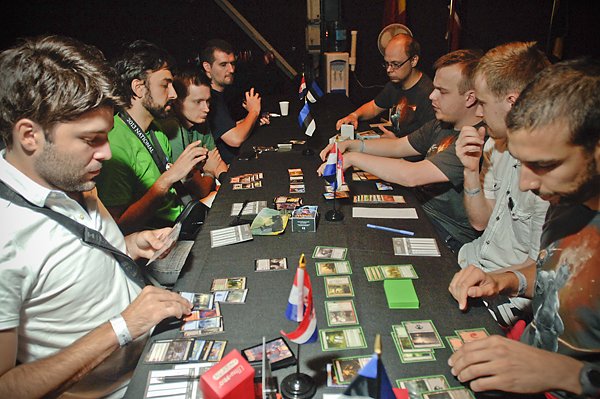 Two teams that made it through to the end of Day Two in last year's World Magic Cup were now competing this round to keep their country's hopes alive during this year's big event.

The first match, between the two national captains, was a classic matchup between the hyper-aggressive Rakdos and the slower, yet larger, Selesnya deck. Both Maretic and Kerem are their countries' respective all-time leaders in Pro Points, so it was no surprise to see top notch play in this match.

The first game began with an expected fast start from Maretic. Running a pair of Hellhole Flailers and a Gorehouse Chain-Walker, all unleashed, over the first turns of the game, Maretic jumped out to a massive lead. A lead that it only took Kerem one turn to evaporate. The Estonian captain had only upgraded a Centaur's Herald to a 3/3 Centaur token over his first few turns, passing the game back to AMretic with four mana open. When Maretic sent his team, Kerem used Rootborn Defenses to double his blockers, as well as give them the ability to survive the impending combat. With this one play, Kerem was able to eat both of Maretic's Flailers, only giving him the chance to throw one at him. This left Kerem at only five life, but he had complete control over the game by this point, winning the game turns later. 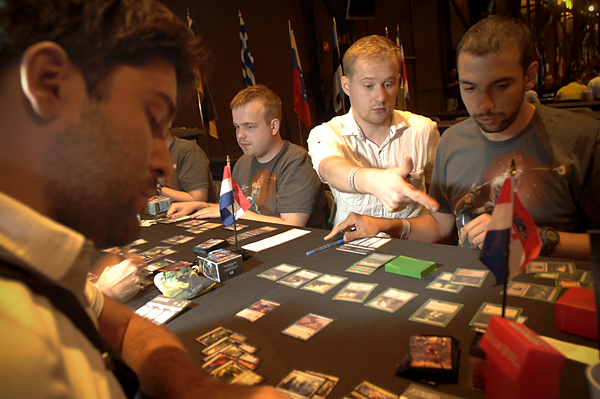 Estonia navigates some speedy starts from their opponents.

The second game saw an even faster start from the Croatian captain, though he was handcuffed by a lack of lands. After a Weapon Surge cleared Kerem's early board and a bloodrushed Rubblebelt Makka dealt with an Advent of the Wurm token before it could be populated, Maretic found himself unable to press his advantage due to being stuck on three lands. By the time he began to draw lands, Kerem had negated the early pressure by adding a Gift of Orzhova to a 3/3 Centaur, wiping out the disparity in life totals, and eventually Maretic himself to give Estonia a one match lead.

This match was very similar in theme to that of Kerem and Maretic. Kaasik's deck was a blazingly fast Boros concoction, while Lujic's Selesnya deck was slower, but packed with larger bodies.

Lujic never really found himself behind in the first game due to the fact that his creatures were either larger or more numerous than Kaasik's at every opportunity. Between Call of the Conclave, Seller of Songbirds, and Thrashing Mossdog, Lujic simply dominated the board at every point. From the point when he combined an Arrows of Justice and a bloodrushed Slaughterhorn to completely wipe the Estonian's board clear, the rest of the game was simply motions to an inevitable end.

The second game showcased exactly how to beat Selesnya with Boros: be the deck playing the bigger creatures. On the play, Kaasik was able to play Gorehouse Chain-Walker and Splatter Thug, both unleashed, and begin attacking. Even when Lujic was able to begin playing 3/3 creatures, Kaasik was able to prevent Lujic from blocking profitably through a combination of bloodrush and removal. Constantly a step behind, it wasn't long before Lujic simply fell to the strength of an unleashed Splatter Thug on the play. 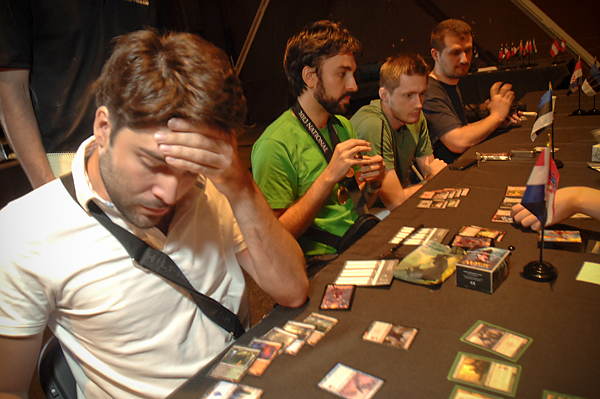 Lujic seeks to even things up for his team.

I'm sure there would have been another great game between these two, where Lujic being on the play was sure to make a difference in the outcome, but...

Simon Robberts had to go and ruin it for us all.

Robberts opened with what appeared to be a Gruul aggro deck in the first game. On the strength of a Burning-Tree Emissary and Zhur-Taa Druid on the second turn, Robberts was able to quickly whittle down Portolan's life total. For his part, the Croatian Portolan set up rather slowly, simply adding a Prophetic Prism over the first few turns. Down to 7 life, it looked like he might be able to get back into things when he dropped a Blood Baron of Vizkopa into play on his side, drawing an exclamation from his opponent. Yet it appeared that Robberts's big reaction was all for show, as he added a black mana source to his side, allowing him to cast Slum Reaper, forcing Portolan to sacrifice the Baron, clearing the path for Robberts to finish him off.

The second game was far more involved, as Robberts showed his more in depth multicolor nature. Just as Robberts had simply drawn the "Gruul" part of his deck in Game 1, Portolan drew his "Dimir" part for the second game, including a handful of removal. Unfortunately, removal is only effective when you can cast it and continue to build a board position. Portolan found himself slighted on lands for a few turns in the second game, watching his chances at evening things up slip away as Robberts continued to add to his board, creature after creature. By the time Portolan was able to get himself enough lands to make a stand, Robberts had an army in play, as well as removal of his own to pave the way for him to secure the win for Estonia, advancing them to the second stage of Day 2.

After the match, Kerem revealed that the blue in their pool was just utterly abysmal. Between the three decks, only two blue cards made it into main decks: Turn // Burn for Kaasik's Boros deck (he was only playing the Burn half) and Far & Away for Robberts's multicolor deck.