After managing to make it out of the first stage of Day Two, Hungary and Belarus met to do battle in Unified Standard Constructed for the final stage before the Top 8. With just three rounds to go, the slates were cleaned as the final pools of teams tried to outdo one another to advance. Still, as we have made mention of more than once this weekend, seeding is very important to determining which teams move out of the group phase. Lower seeded teams run the risk of losing out on an opportunity to advance should they share a record with a higher-seeded team. As such, wins are incredibly important at every opportunity. For the fourth place team in a pool, there is a massive difference between 3-0, guaranteed to move on, and 2-1, which could still leave them on the outside looking in.

Coming into this match, Hungary was in the undesirable fourth seed within their pool, while Belarus was sitting far prettier in second place. In order to ensure that they didn't run afoul of an exit based on tiebreakers, the Hungarians, led by Tamas Nagy and Gabor Kocsis, needed to start this final push strongly. While Hungary's squad has some of the more experienced players remaining in the tournament in Nagy and Kocsis, Belarus is one of the more inexperienced teams in the tournament. Still, that hasn't prevented them from defeating teams like the Czech Republic and the Slovak Republic.

This match between Hungary's Adorjan Korbl and Belarus's Ihar Klionski illustrated perfectly why Jund Midrange is a favorite of many players to defeat the aggressive decks in the format. After Korbl set himself up with the perfect anti-aggro Huntmaster of the Fells a turn early thanks to a Farseek, he was able to completely strip Klionski's hand with a Rakdos's Return. Once he added Chandra, Pyromaster, to his side of the table, the game was locked up. He soon began to draw two cards a turn, furthering his advantage until he had run over his Belarussian opponent. 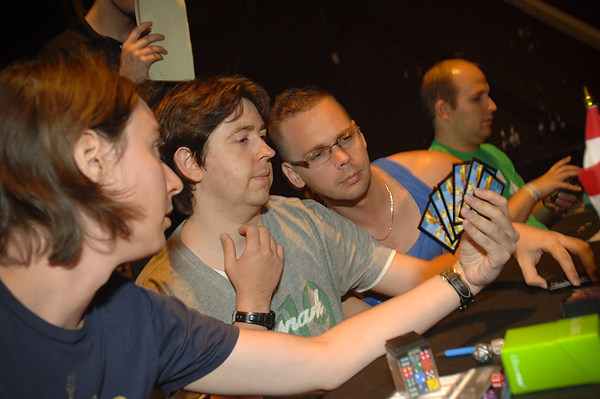 Hungary's team looked to get a leg up on their competition by knocking their opponents, Team Belarus, from their second place pedestal.

Things didn't get much better for Klionski in the second game, but he made a much better show of it. Despite only sitting on two lands for a few turns in the early part of Game 2, Klionski managed to get a quick pair of Flinthoof Boars into play with a Mountain, and he began to beat down. After Klionski had stabilized thanks to Thragtusk and Huntmaster of the Fells, Korbl scarily hit five mana, dropping two Zealous Conscripts into play on consecutive turns and dropping Korbl to 2 life. Afterward, Korbl dropped an Olivia Voldaren into play, immediately killing a mana critter to keep Klionski off of five mana. That let him use Scavenging Ooze to gain a boatload of life and bring himself back from the brink.

It almost seems like the Selesnya Aggro deck piloted by Gabor Kocsis is designed to beat decks like Yehor Polschal's Blue-White-Red Flash deck. Between cards like Advent of the Wurm and Voice of Resurgence, the deck is filled with ways to fight the instant-speed nature of Flash.

Game 1 saw those exact cards make short work of Polschak. Early Loxodon Smiters and Strangleroot Geists had whittled his life total down. After Kocsis landed a Voice of Resurgence, with Polschak at a mere 6 life, Supreme Verdict cleared all but an Elemental token. After that, a Loxodon Smiter and end of turn Advent of the Wurm flashed in to just demolish those last few points of life.

Game 2 was a bit one-sided, and not favorably for Kocsis. After sitting on Plains and Temple Garden as his only lands, Kocsis drew all three-drops and the hilariously hard to cast Strangleroot Geist. As Polschak unloaded a pair of Boros Reckoners onto the table, Kocsis sat idly, unable to cast anything in his hand.

Kocsis looked like he might be able to redeem himself in Game 3 after unloading a hand of triple Loxodon Smiter, Strangleroot Geist, and Silverblade Paladin onto the table. Polschak cleared the board once with a Supreme Verdict, but he was low enough that he was forced to blow another a few turns later to kill a single Smiter. Tapped out, he was dismayed to see Sigarda, Host of Herons hit the table. However, as he braced himself for that first angelic impact...

The match between Hosszu and Miadzvedski ended abruptly, and in an incredibly one-sided manner.

Once upon a time, Black-Red Zombies was the most dominant deck in Standard, crushing everything in its path, including decks like UWR Flash. This time, however, it was not to be the case.

As Miadzvedski unloaded his hand, dropping Diregraf Ghouls, Knights of Infamy, and Lifebane Zombies into play, Hosszu dealt with them all in turn, blowing a couple of Pillar of Flames before mopping the rest up with a Supreme Verdict. While a Falkenrath Aristocrat provided a minor scare, Hosszu was able to use Snapcaster Mage to eventually flash back a Pillar of Flame to push it aside, killing Miadzvedski with a Thundermaw Hellkite and a Restoration Angel. 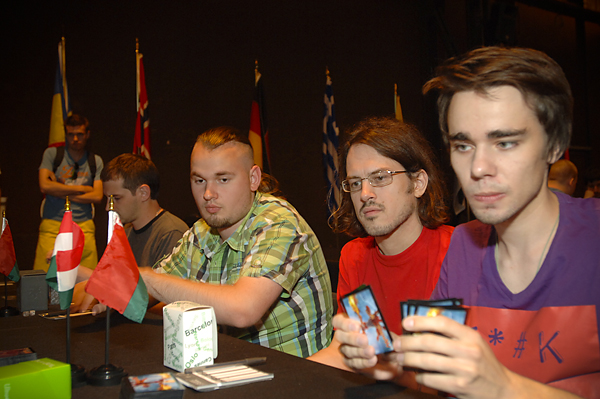 Team Belarus has no intentions of slowing down.

The second game, the one that so rudely interrupted an interesting game between Kocsis and Polschak, was not even remotely close to fair. Hosszu drew multiple of his excellent sideboard cards in this matchup and used them to take complete control of the game and the match. A pair of Rhox Faithmenders joined a dominating Izzet Staticaster in crushing Miadzvedski's creatures and pushing Hosszu's life total well out of reach.

After the match, I asked Tamas Nagy about his decision to coach rather than play, and he answered much the same as I had heard from Josh Utter-Leyton from the United States.

"I am the most experienced player," Nagy said, "So I wanted to put myself in the position where I could best help the most matches. This let me give advice to the entire team. It has worked very well so far."