t's not every day that you see players risking a rogue deck or larger scale deviations in a tournament with $25,000 and an invitation to two large-scale tournaments on the line, but that is exactly what is happening in today's Standard rounds today. Let's start off today's Standard rounds with a look on what people have done to change an already established idea into something fresh, along with some of the fringe decks that have seen a resurgence today.

While three of the five Black Devotion decklists are relatively straight-forward with the exception of a different number here or there, two of the lists being played today have some new additions to improve upon a good thing.

The first of these revised lists comes from Lars Dam. While many Black Devotion decks have been known to dabble in the scry lands from Theros for a little draw filtering, Dam's access to Temple of Malice and Blood Crypt give him a little leeway in his list. What card is taking advantage of the red mana?

That card would be Sire of Insanity.

The Sire tends to be very, very good against Sphinx's Revelation decks.

The Sire gives Dam access to a trump card against strategies leaning too heavily on Sphinx's Revelation. While Black Devotion is perfectly capable of operating off of no hand at the end of each turn, and can in fact get around the effect with Underworld Connections (drawing a card during the end step after Sire triggers to go into your own turn with two cards), it is utterly devastating against any deck looking to grind out a game with a big card draw spell.

The red mana also gives Dam access to a single Slaughter Games out of the sideboard, giving him a way to remove the few ways an Esper deck is capable of winning the game.

The more shocking Black Devotion deck in this field however belongs to Tamas Glied, who is running three copies of Ashiok, Nightmare Weaver in his main deck, taking advantage of his blue splash from Watery Grave and Temple of Deceit. The Ashiok can prove to be devastating against the right decks, acting as an outright win condition and sometimes recurring an exiled creature off of its effect.

"I played Mono-Black a lot before Born of the Gods, and whe Bile Blight came out, everyone was putting at least three in their main deck because it is so good against Pack Rat," Glied explained. "I would not play Nightveil Specter main. It dies to Dark Betrayal out of the sideboard, and all of the removal now. It's also three black, and sometimes you draw a Mutavault or two and can't even cast it. I wanted to swap it out, and the best card I could swap into is Ashiok, because it is amazingly good against Mono-Black." 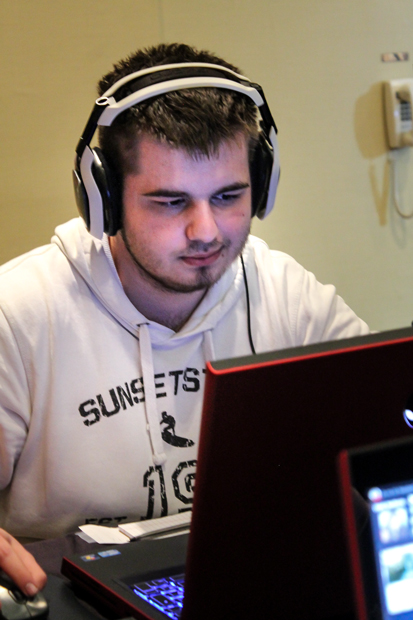 Tamas Glied is a huge advocate for Ashiok, Nightmare Weaver as the direction Black Devotion should be moving towards.

Indeed, Ashiok can really perform in the match-up. Its loyalty makes it very difficult to remove, and unlike Specter, it dodges the standard removal suite sans Hero's Downfall (which even then, takes one out of the opponent's hand and makes it more likely that Desecration Demon will live). "Ashiok is pretty good against Mono-Black and Mono-Blue if you're on the play," he explained. "A turn two removal spell into turn three Ashiok can end a game." Glied believes that Ashiok is the appropriate direction to take Black Devotion in the current format, as it is better positioned against the decks currently running around in Standard. Also, it gives you the chance to occasionally sneak a Blood Baron of Vizkopa into play against the Orzhov and Esper decks running the five-mana mythic, which is a hilarious role reversal if the opponent can't get the planeswalker off the table.

Glied's deck also has access to Notion Thief, a card that is particularly heinous against Azorius Control due to the two-color control deck's inability to answer the card at instant speed. While it is a fine card to force players to play differently when they know it is coming, the Dragon's Maze creature is especially back-breaking if an opponent has no idea that Glied has access to it, and given Black Devotion's usual inclusion of scry lands as a way to filter through draws, it's easy to overlook the Thief as a possibility against a deck is that predominantly mono-color.

Again, while the Blue Devotion strategies aren't going through radical changes, primarily due to needing some amount of creatures that contribute to your devotion effects, a splash for white has become prominent in today's lists. Both Valeriano Villaneuva and Cory Lack have added Temple of Enlightenment and Hallowed Fountain to their decks, giving them access to the versatile Detention Sphere as well as singleton Ephara, God of the Polis, a powerful and godly addition to Thassa, God of the Sea.

Anssi Alkio came to this event equipped with a B/G Dredge deck, a strategy that has been seeing some play on Magic Online as well as at the Grand Prix level in the hands of some notable players. The Dredge deck, named after the dredge mechanic that debuted heavy creature-graveyard interactions back with the release of cards like Golgari Grave-Troll, aims to fill up the graveyard with creatures, using those creature to fuel something awesome.

In Alkio's case, this deck aims to make very large Nighthowlers, or a very large Jarad, Golgari Lich Lord. Jarad pulls double-duty in this strategy, giving Alkio another massive monster, a recurring threat, and a way to get around limitless chump-blockers with its "Fling" effect. Nemesis of Mortals and Whip of Erebos round out the ways Alkio takes advantage of a full graveyard, either creating a huge monster or barraging the opponent with a large supply of recurring, lifelink creatures.

Gabriel Rogasner is running perhaps the most rogue deck of the event, opting to battle through the four rounds of Standard with Maze's End, a Fog deck that aims to win the game with Maze's End and ten guildgates. The strategy is simple: don't die, using whatever methods of dragging out the game that you can to ensure that you don't die. Use Maze's End to find each guildgate out of your deck, and when you find the tenth unique guildgate, you win!

The final major deviation from the regular Standard decks is Farand Lee with big Naya, a deck looking to play five, six, and seven mana Naya spells in an effort to overrun the opponent. Perhaps the most unique element to this deck is the four main-deck copies of Archangel of Thune, a brutal creature to curve into with Elspeth, Sun's Champion a turn later.

It should be interesting to see how the Standard format continues to evolve in the coming months, especially with the release of Journey Into Nyx in a few weeks. However, for now, these sixteen players are far more concerned with the Standard format's present iterations, and whether their deviations on what is known and what is unknown will give them a needed advantage in the final four rounds of the tournament before the Top 4 cut.