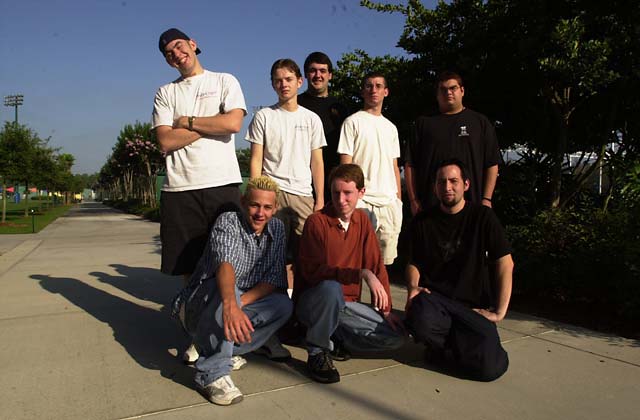 When all was said and done, there were eight who stood above the rest. Six rounds of Swiss in a metagame bent almost to breaking by fear of Orb-Opposition decks had done their best to separate the apples from the oranges.

Team AlphaBetaUnlimited.com continued to demonstrate their talents, putting both Chris Benafel and Brian Hegstad in the Top 8. You might not have guessed it at the start of the day, when Benafel was still having trouble deciding what deck to play. Apparently his Fires was the right choice.

Hegstad ran a blue-white Control deck that relied on Story Circle for defense and killed with Millstone. The two even matched up in the Swiss, and there Benafel took advantage of two substandard draws from Hegstad to walk away the victor.

Still, the most popular deck in the Top 8 is Fires, played by Blackwell, Harvey and Jensen as well as Benafel. A number of players decided in advance that a strong showing in the Limited portion of the tournament would convince them to play Fires. When you only need 4-2, or better still, 3-3, the it's smart to bank on the consistency of Fires.

Casey McCarrel is playing what some are calling "The Kibler Deck", a blue-control deck that splashes black for Tsabo's Decree and sideboard gold like Slay and Rebel Informer.

The Top 8 will also serve as a showcase for two less-recognized decks, those of David Bachmann and Alex Borteh. Borteh is running a Merfolk Opposition deck that split 20-20-20 for creatures lands and spells. Bachmann's is a mono-red land destruction deck that shuts down creatures with Ensnaring Bridge. Operating on an empty-hand strategy, if its landkill doesn't come through, it is very vulnerable to artifact destruction.

Perhaps even more interesting than the Top 8 are the next eight. Not only does it house luminaries Jon Finkel and Zvi Mowshowitz, but two players that had a lot of popular support, Dave Price and Jason Zila. All four missed the cut on tiebreakers.

Many players thought that the inclusion of Seventh Edition. Even disregarding the amazing Orb-Opposition deck, there were plenty of strong rogue designs in the field. Most widely played of the rogues was Adrian Sullivan's "Turbo Chevy", a monoblue control deck that offsets a ridiculous land count of eighteen islands with a full complement of cantrips, including Opt, Sleight of Hand and Accumulated Knowledge. It's reminiscent of Turbo Xerox.

Another strong rogue was "Saproling Burt", a blue-green Opposition deck that runs no creatures, only Spontaneous Generation and Saproling Cluster. A number of players tried to counter the Generation, only to watch the Burt player Thwart and then kill them in three turns.

Tomorrow, the ruthless arbiter of double-elimination will decide who is fit to represent the USA, and who is fit only to be a spectator.