ast weekend, Grand Prix Calgary set the stage for Magic 2014 Standard. That weekend belonged to Jund and Blue-White-Red Flash, and decisively so. Jund was the most popular deck in the second day of that Grand Prix, was touted by many to be the best deck in the format, and (in the hands of Stephane Gerard) made it all the way to the finals. However, it was Blue-White-Red Flash that (in the hands of Alexander Hayne) claimed the trophy, the glory, and the title.

That was last weekend. This week, we have the most prestigious tournament of the year: the 2013 Magic World Championship. One of the formats that the competitors have to battle through is Standard, and it looks like most of them agreed with the outcome of Grand Prix Calgary. All decklists are shown here. Here's the metagame overview:

Blue-White-Red Flash is exactly the sort of deck that the players who were qualified for the World Championship like to play. Yesterday during the player party, all players got to pick a planeswalker hoody, and most of them went for the one with Jace. In other words, they like to cast Sphinx's Revelation. And out of all the Sphinx's Revelation decks in Standard, Blue-White-Red Flash is arguably the best.

If a Blue-White-Red Flash player passes the turn with four mana up, the opponent has to play around Syncopate, Searing Spear, Restoration Angel, Snapcaster Mage, Azorius Charm, and Warleader's Helix simultaneously. Without knowing which card is actually in the opponent's hand, that's a nearly impossible task, making it very difficult to play against the deck. Another possible reason why 50% of the field is on Blue-White-Red Flash is that the deck is at its best in the hands of an experienced player. Being able to identify the turning points in the games at which you need to switch from the control role to the aggro role is a big element of playing the deck, just like the Faeries decks of old, and the World Championship players are up to the challenge.

The quintuple playtest group of Stanislav Cifka, Martin Juza, Shuhei Nakamura, Yuuya Watanabe, and Ben Stark all settled on Blue-White-Red Flash, though it was a last-minute decision. Yesterday morning, they were all still on Blue-Black control with Nephalia Drownyard as their main win condition. That deck was supposedly great against Blue-White-Red Flash, but they discovered it had a hard time beating Jund after sideboard. Expecting a ton of Jund, they all decided to switch over to Blue-White-Red Flash, which they felt had a good matchup against Jund on the back off the seemingly endless stream of card advantage and efficient countermagic to stop Jund's big threats. Expecting a lot of Jund and a lot of mirror matches, they put Ætherling in their main decks and Assemble the Legion in their sideboards.

Magic Online Championship winner Dmitriy Butakov and the playtest group of Shahar Shenhar and Tom Martell rounded out the people running Blue-White-Red Flash. The combined record of all eight players running this deck was 11-13, for a 46% win percentage.

Between Olivia Voldaren, Thragtusk, and Scavenging Ooze, Jund runs some of the best creatures in Standard. Between Bonfire of the Damned, Dreadbore, and Tragic Slip, it contains some of the best removal spells in Standard. And due to Farseek, the mana consistency and speed of the deck is top-notch as well. All in all, it's a well-rounded deck with few bad matchups.

Unsurprisingly, Reid Duke is one of the five players running Jund. Reid recently won Grand Prix Miami with his trusty Jund deck, and he saw no reason to switch archetypes.

The ChannelFireball playtest group of David Ochoa, Josh Utter-Leyton, and Eric Froelich all went for Jund as well, and they had an interesting innovation: they added Lifebane Zombie to their main decks, just like finalist Stephane Gerard did in Calgary. However, instead of cutting Farseek, as Gerard did, the ChannelFireball guys cut removal spells to make room for the new incarnation of Vendilion Clique. Lifebane Zombie allows you to not only strip a card from your opponent's hand (be it Thragtusk, Boros Reckoner, Silverblade Paladin, Scavenging Ooze, or Restoration Angel) but also gives you an aggressively-costed creature that can pressure or block early on. It's particularly good in the mirror match for taking out Thragtusk and lowering the deck's mana curve overall.

Asia-Pacific Professional Point leader Lee Shi Tian was also running Jund, and he tuned his deck for the mirror match: He cut Huntmaster of the Fells to make room for Underworld Connections and Primeval Bounty. Primeval Bounty seeing play in Standard may be a surprise, but Lee said that the card is amazing. Especially in the slow, grindy matchups, it provides a steady stream of minor advantages that can overwhelm any opponent if it stays around for too long. 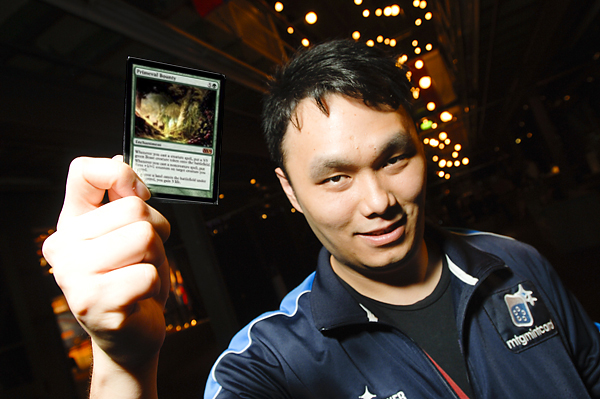 Lee Shi Tian's Jund deck was prepared for the metagame that revealed itself this weekend.

These are unconventional choices, but they were highly praised by the other competitors. "Lee Shi Tian's list is the best Standard list in this tournament because it is pre-boarded for Blue-White-Red and Jund," David Ochoa said. Nevertheless, it seems that the games did not go the way Lee wished, and he ended up with a disappointing 1-2 record.

The Lone Wolves Wescoe and Edel

To the surprise of exactly no-one, Craig Wescoe is playing White Weenie and Willy Edel is running Naya midrange.

Craig Wescoe is known for playing White Weenie whenever possible; lots of cheap, aggressive white creatures is simply his style. His experience with the deck paid off with a win at Pro Tour Dragon's Maze. For the World Championship, he added a touch of red cards to go with Champion of the Parish and Silverblade Paladin. "I'm playing red mainly for Searing Spear and Slayer's Stronghold," Wescoe said. "Searing Spear is the best answer to Huntmaster of the Fells, which is one of the best cards against me. Slayer's Stronghold is very good against Bonfire of the Damned and Supreme Verdict, and it combos with Fiendslayer Paladin to allow me to race any other aggro deck I might face. Burning Earth in the sideboard was more of an afterthought, though I am happy to have access to it against the slower decks." Wescoe went 2-1 in Standard.

Four-time Pro Tour Top 8 competitor Willy Edel, who piloted Naya midrange to the finals of Grand Prix Guadalajara earlier this year, mentioned that he tried to build other decks, since Lifebane Zombie is very good against Naya. "But I didn't have the time to find anything better," he said, and he decided to stick to a deck he knew inside out. As it turned out, his deck was as ill-positioned as he feared. Edel finished 1-2 finish in Standard.

Hall of Famer Brian Kibler loves to use mana elves to ramp into big dragons, so he chose to go with Arbor Elf and Thundermaw Hellkite this time around. "My deck is very good against Blue-White-Red Flash and solid against Jund," he mentioned. "My deck is filled with haste creatures and Domri Rade, which are pretty powerful against Blue-White-Red Flash. I'm also happy to play against Jund, though it can be tough especially if they have Lifebane Zombie in their deck. My deck originally contained Predator Ooze, but I needed to become more aggressive to deal with the Lifebane Zombie version of Jund. That's when the Strangleroot Geists and Hellriders came in. Geist comes down before they can discard it, and Hellrider is not a green creature." 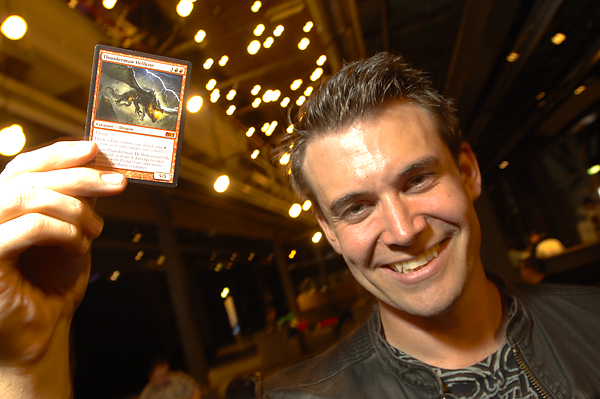 The Dragonmaster, unsurprisingly casting dragons at the 2013 Magic World Championship.

I also asked Kibler about a pair of four mana enchantments in his sideboard: Gruul War Chant and Burning Earth. "Gruul War Chant is good against Jund and Naya---decks that can present individually difficult creatures, such as Boros Reckoner and Thragtusk, that I need to get past one way or another," Kibler explained. "However, I realized afterward that I should have played Chandra, Pyromaster instead. It's like a Gruul War Chant with upside." It looks like the Magic 2014 incarnation of Chandra will find a home after all.

Kibler's metagame calls worked out very well for him, as he scored a pristine 3-0 record in Standard.