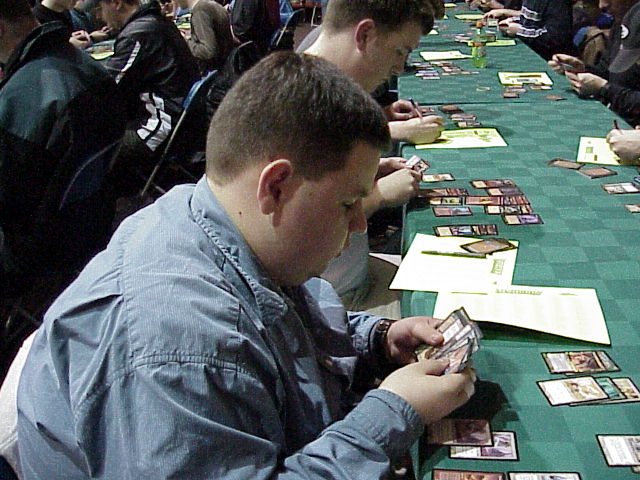 Steve O'Mahoney-Schwartz is one of the most successful Grand Prix players of all time - no one has won more and only Alex Shvartsman has more Top 8's. With just three rounds left in Grand Prix Boston, he found himself drafting at table 2 with Stephen Hope feeding him and hometown favorite Dave Humpherys on his left.

Steve first pack gave him many options: Charging Troll, Lotus Guardian, Tribal Flames, Thornscape Apprentice, Tower Drake Vodalian Zombie, and Nomadic Elf were all there. He went with Tribal Flames. Then his next pack had Faerie Squadron, Kavu Climber and Duskwalker. Steve went with Duskwalker, situating himself in probably the best 2-color combination available. There wasn't anything for a black/red mage in the next pack and he found himself debating Serpentine Kavu versus Yavimaya Barbarian, eventually he settled on the hasty Kavu. The green just kept on flowing with Nomadic Elf and another Serpentine still hiding out in 4th pack. Steve took the bear. There wasn't much left in pack 5 except Glimmering Angel, so Steve took it (over Darigaaz's Attendant). Hi next pick confirmed that the black and red had dried up completely so he took Crimson Acolyte (over Reviving Vapors). I bet he wished he'd taken that Charging Troll out of the very first pack! He lost a lot more than just a Charging Troll, though, because Humpherys drafted it and proceeded to draft the very same colors as Steve for the entire draft. Rith's Attendant (over Maniacal Rage), Strength of Unity (over Defiling Tears), and Quirion Trailblazer rounded out pack 1.

Steve took first pick Jade Leech from the second pack and then drafted Llanowar Knight while sending Spinal Embrace on down the line. His third pick should tell you something about how important the pros think mana curve is: Quirion Sentinel over Sulam Djinn. Even with Humpherys drafting red/green/white right behind him, Steve's card quality stayed remarkably high in pack 2. He took 4th pick Pincer Spider (over Explosive Growth and then Llanowar Knight #2 over Voracious Cobra. Steve got a little lucky that the packs had enough green to support both he and the Hump. He finished the Invasion portion of the draft with a pair of Obsidian Acolytes and an Aggressive Urge.

Steve's first pack of Planeshift had an awful lot of good cards for their not to be one for him: Doomsday Specter, Lava Zombie, Cavern Harpy, Exotic Disease, Hunting Drake, and Sawtooth Loon all got passed down the line while Steve drafted Quirion Explorer. The pack was even worse for Humpherys, of course. Next Steve took Hobble (over Stone Kavu) and then got passed a Shivan Wurm. Hello red splash! I was quite surprised in pack 4 when Steve drafted Hobble #2 over Thornscape Familiar (and Strafe). His deck seemed quite aggressive and the Familiar would have fit in perfectly. Samite Elder and Samite Pilgrim rounded out his relevant Planeshift picks.

Steve needs to post a 2-0-1 mark with his deck. It'll be tough, but he's entirely capable of pulling it off.