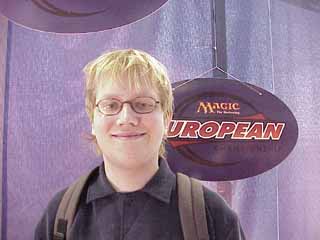 Tomi Antti Juhani Walamies is on a streak. He won a qualifier one month ago, and he also qualified for the Euro Championships by finishing seventh in the Finnish nationals. In Euros, he has continued his winning streak by going 6-0 in the draft portion. Not bad, considering that six months ago, the 19 year old was in the army, deliberately losing to a sergeant in order not to get punished. "I don't know if I would get punished, but I didn't want to take that chance. And he was really bad, so I just discarded even though I had lands. Then again, I didn't go to the army to win Magic games," Tomi smiles.

After six months of military service, Tomi had done his duty around December and picked up serious Magic again. This is his first major tournament after he got out, but Tomi has definitely not lost anything - well, except from his hair. When he finished tenth in 1997 Pro Tour New York and when he finished eleventh in Worlds 1998, he had long blonde hair hanging down on his shoulders. Now, his hair is pretty short. "They cut my hair. In Berlin last year, I didn't have any hair at all," he says.

It doesn't seem that the hair was what brought Tomi luck, though. One card seems to follow him throughout the Masques Block drafts; Mageta the Lion. "My friends are angry at me. In the last four drafts I've had Mageta the Lion. I always get it," he laughs, definitely not complaining about his luck. He even got the card as the third pick in one of the Euros drafts. Then again, both the drafts went really well for him.

In the first draft, Tomi got a blue and white draft with five Rebels, four of them searchers. In addition, he had a Mageta and a Story Circle. The second draft gave him green and white. "I had crazy first picks; Squirrel Wrangler, Saproling Burst and Mageta the Lion," Tomi explains. He had expected perhaps a 4-2, 4-2 record to finish up forty-something and get money, or in the best case to go 5-1, 4-2 and make the top 16. Now, if he can pull off a 3-2-1 finish in the Standard, he might face his first international top 8 finish.

"Playing in big tournaments is really cool. It's nice to play in local tournaments with nice players, but I like the tension of the bigger events. You are trying to topdeck a land and know that land can be worth 1000 dollars," Tomi explains. "I also like the psychology of the game, to find out how people react in certain situations - like the way you can see that they think they are winning if they have something good in their hands. I am always trying to guess the cards of my opponent."

Tomi doesn't really know what his strength as a player is. "Finns are told not to brag," he grins. He was surprised though when he went 6-0. Unfortunately, he lost the first round of the Standard portion. Tomi couldn't draw the one land he needed to beat Noah Boeken's Stompy deck. "And I lost because of this," he says and points to his big, red die. The Finn lost the die roll and thus Noah got to go first. That made him able to cast Uktabi Orangutan and kill Tomi's Powder Keg. If Tomi had gone first, he would have countered the Orangutan.

"Type II is a lot more about the die roll than Limited. You win the die roll and get to counter stuff. If you lose, you won't get to counter anything. People will just play Tangle Wire. So I wish I could play Force Spike." Still, Tomi is confident about his deck choice. "I've been scouting like mad, and a lot of the decks are artifact decks. I have two Annuls and two Foils in my main deck, so I'll have the advantage against them. So I hope I'll go 4-2."