It's crunch time for many teams since they can't afford to take another loss. Otherwise, they won't have a chance of advancing to the Top 4, which is of course the number one goal of all the players that remain in competition today.

Since everyone has now been able to collect a ton of experience with the Theros / Born of the GodsTeam Sealed format, I wanted to sit down with two teams and ask them whether their strategy has shifted over the course of day one or when they started day 2. 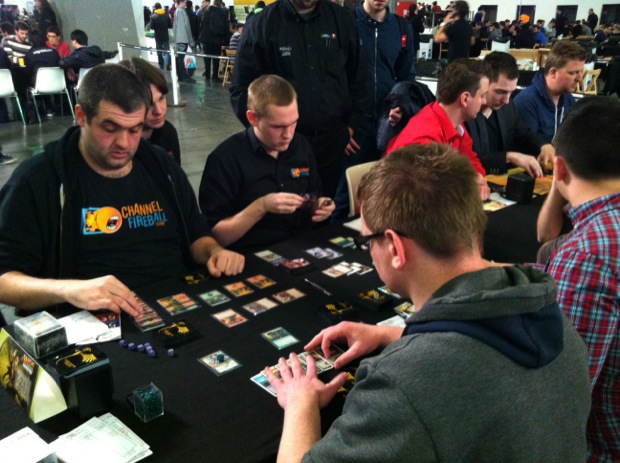 The team of Robbie Ferguson, Marek Pieprzyk and Roy Raftery had to go up against the undefeated Americans in Round 11!

The first team on my list were Robbie Ferguson, Marek Pieprzyk and Roy Raftery. This is what Pieprzyk had to say when I asked him whether they have learned anything yesterday that affected their decision making process for today:

"Well, not necessarily; there was nothing we didn't know before since we've put in a lot of hours in to the playtesting process."

Raftery chimed in: "One thing I learned is that

How did you guys design on the seating order for your team?

Pieprzyk: "They were too lazy to sign up our team, so I was able to dictate the order. No, in all honesty, I probably know the most about the format, so it made sense that I would be sitting in the middle."

Raftery added: "Yeah, he's got the most experience with Sealed. I've only done one Draft and one Pre-Release, so I didn't feel confident enough to sit in the middle."

Did you adapt your strategy for the second day in some way, like going for a riskier approach?

Pieprzyk: As long as we're not on the bubble, we will continue to try and avoid unnecessary risks so we can play as consistently as possible. Only if we take another loss, we'll start adapting strategies a bit and then we might go for some riskier plays." 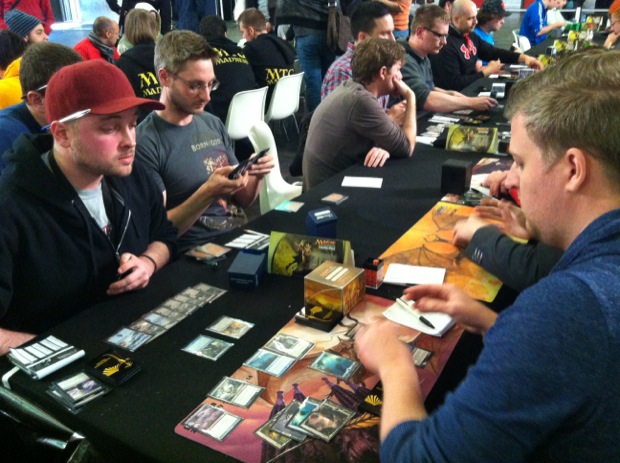 Pierre-Christophe Mondon, Phil Cape and Doug Prosak in their Round 11 match.

Was there anything that you learned yesterday over the course of the tournament?

Did you also change your team strategy, like how you communicate with each other?

Mondon: "Yes, in a certain way. We learned that we tended to stop each other a little bit too much yesterday. Sometimes, we would wait for everyone to agree on a particular play or how to build a deck and this affected us in a negative way. We now decided to just trust each other's abilities more and only start interrupting each other when we really feel it's necessary. This has worked very well for us." 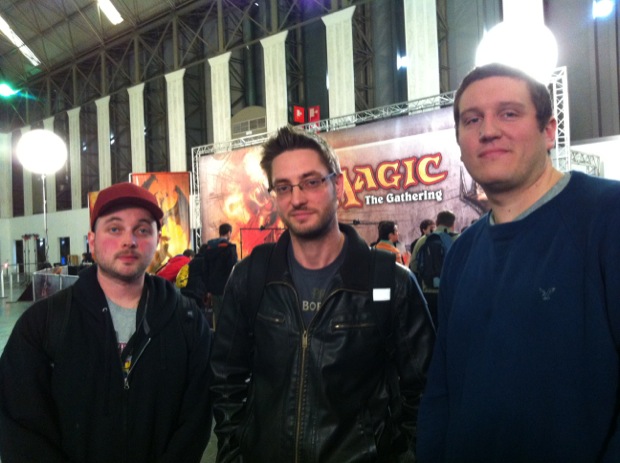 The team of Pierre-Christophe Mondon, Phil Cape and Doug Prosak

What about the Sealed Deck construction?

Mondon: "The hour goes by so quick! It seems like enough time, but sometimes you need to start building your decks much earlier than we thought."

Cape: "Also, building your deck the right way is much more important than finding the right combinations. Just decide on a split and then try to make something out of the colors you're being dealt rather than switching them around a million times. That will only cost you time and often it won't lead to anything."

Alright, thank you guys and good luck for the remaining rounds today!