The team of Bo Li, Zhang Meng Qiu and Hua Chao Song made it through the 9 rounds of Swiss yesterday, finishing with a 7 - 2 record. They can't really rely on their tie breakers since they're currently ranked 36th, so they'll need to put up a strong performance today to still have a chance at advancing to the Top 4.

They had a lot of mixed feelings when they first looked over the Sealed Pool they had been dealt for the second day. "I'm really not sure whether this is any good", Zhang Meng Qiu commented.

Song then distributed the cards among the three players, dealing Bo Li the red creatures and spells while he kept the white cards. 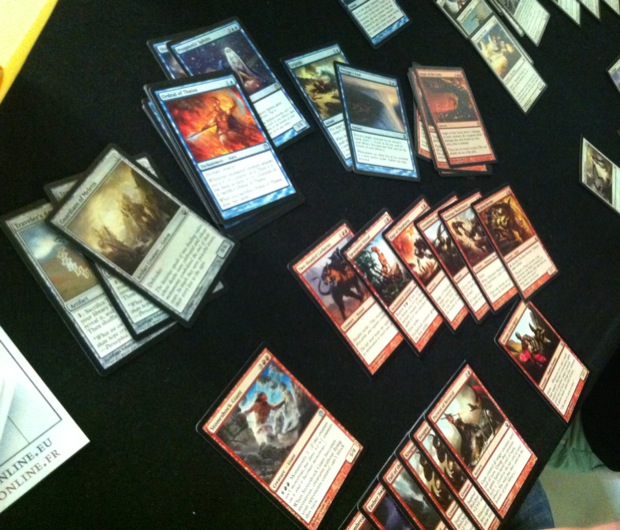 That left Meng Qiu with the blue and green cards which he started to lay out accordingly.

They agreed that the pool wasn't enough to support any mono deck, so they started to think about possible combinations. They were quick to cut black completely since it clearly was the weakest color. They thought that blue was the strongest color, so they tried combining it with both red and white, possibly splitting it across two decks to end up with three slightly above average decks rather than one amazing deck and two decks that would be really lacking.

With Coordinated Assault, Fall of the Hammer, Hammer of the Gods, Voyage's End and three copies of Deepwater Hypnotist and Crackling Triton each, the blue / red deck seemed to have access to a number of combat tricks and removal, but Qiu was quick to take one Deepwater Hypnotist for his own deck that would also be sporting green.

So that made it seem like they would be splitting blue across all three decks, combining it with white, red and green, respectively! 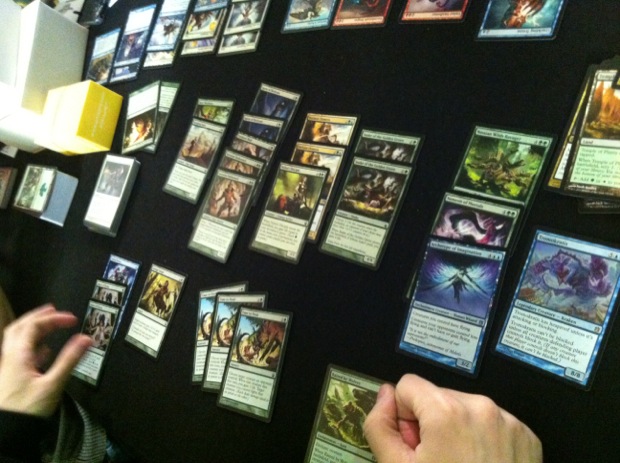 There wasn't too much of a debate, indicating that all players were in agreement that this was the only "right" way to build the decks. Cards like , Nemesis of Mortals and Archetype of Imagination and Tromokratis indicated that the blue / green deck was trying to wrap things up much later in the game, so the question seemed whether there was enough early game to even make it that far. Two copies of Snake of the Golden Grove certainly seemed like they would help accomplish that goal. 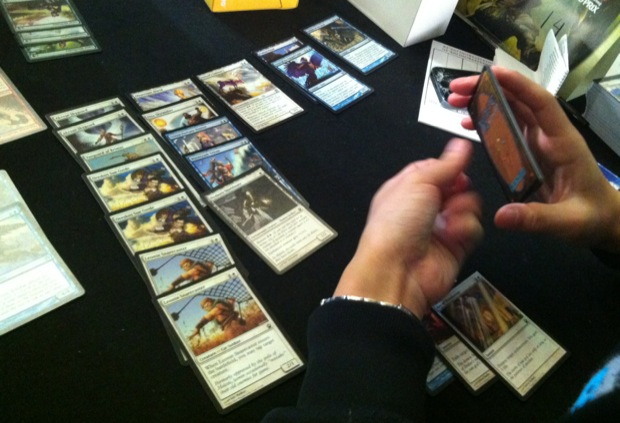 Hua Chao Song meanwhile had no trouble combining the white cards with the leftovers that his teammates handed over to him to build the foundation for an aggressive white / green deck.

He seemed to have a decent enough early game with two copies of Orekos Sun Guide, Leonin Snarecaster, and  each. If an opponent wouldn't find enough blockers during the first few turns, this deck seemed like it would easily be able to take advantage of that fact and wrap things up in lightning fashion.

If games would last a little longer, a Siren of the Fanged Coast and an Arbiter of the Ideal could still turn the tide with both flying creatures being out of reach of most blockers.

All of this didn't sound too bad in theory, but the team was still afraid that the plan might not play out the way they wanted in practice. They now took a second look at the black cards, reconsidering whether to drop the color completely or not. In the end, they stuck with their first idea, dropping the color once again, this time for good, and they then started to register their respective decks.

The players were in agreement that they definitely made the most of their pool, with the rather unique approach of splitting one color across three decks. We'll now take a look over their shoulder when they will go up against the team of Marijn Lybaert, Christophe Gregoir and Zac Hill and check whether their strategy will prove successful.