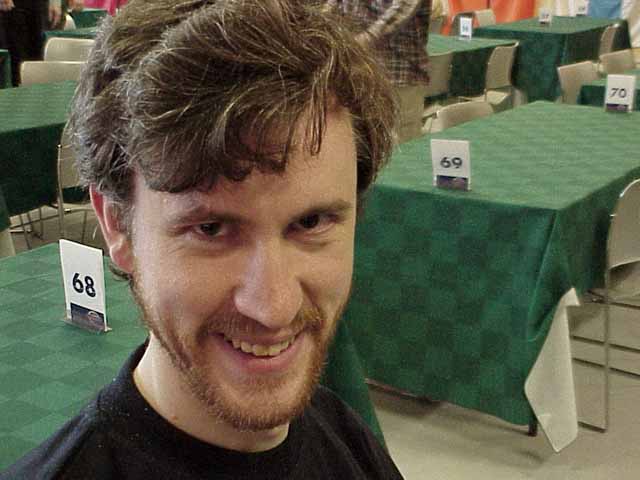 A lot of people have probably heard about the Red Deck Wins 2000 deck (RDW) that took the British by surprise in the UK Nationals. But no-one was more surprised than the deck's designer, John Ormerod. "I built the deck in April, played a few games against Replenish and decided that it didn't beat it and that it was no good. So I left it lying in a box. Then Dan Paskins picked it up and played it, and I realized it was good," the Englishman says.

A coincidence made Paskins play the deck. He wasn't happy with any of the others he had available, and started looking through John's deck boxes on search for something aggressive. One of the reasons why the deck was so successful was that no-one expected it. Red was almost non-existent in tournaments at the time of the nationals, and with few sideboard threats, the deck could do what it was best at: killing an opponent really fast. "I realized that there were lots of good burn spells in the format, and lots of small creatures that shot to the head. No-one had a strategy against it at that time," John explains.

Now, the deck is significantly weaker because people are aware of it. However, the current version is better than the one played at the British nationals. Ormerod doesn't know what to play, though. He expects a field of Replenish, Angry Hermit and Blue Control, and looks for a deck that can match such an environment. The goal is to qualify for the World Championship, and John got a pretty good start. 4-0 after the first four rounds is definitely not bad.

"In drafted black and blue in the first draft, but I only had 19 good cards. But I had a lot of flying creatures and good black removal, so although I used three substandard cards, the flyers were enough. My Indentured Djinn won me three of the six games," John says. In the second draft, he went for a green and red deck, and John was satisfied. "The deck is good enough for 6-0," he smiles while getting ready to play the fifth round.

John started playing Magic around The Dark, mainly because some of his friends played. He didn't go to tournaments before two or three years later, though, and he didn't get really serious until after his first Pro Tour event. And in spite of having one fifth place finish from Pro Tour Mainz and one ninth place finish from 1999 Pro Tour Chicago, he still doesn't take it all that seriously. "I think all the others on the team take the game more seriously than I do," John smiles. He is a member of the European Alliance, like for instance Kai Budde and Mattias Jorstedt.

"It is difficult to communicate, because we don't see each other often. We don't hang out all the time, not even at tournaments. But we see each other on IRC, so it kind of works. Most of us are productive," he explains.

John's strength is definitely making new decks. "And my main weakness is making stupid mistakes," he admits. So far in the tournament, he has made a few. "I had a Greel's Caress and played it on my turn while I should have played it on his turn. Then his creature would be tapped, and I could have killed him a turn earlier. In addition, I tried to trample incorrectly and got a warning. It was just stupid."

Then again, John doesn't have big ambitions. His main goal now is to qualify for Worlds, other than that he doesn't have any secret wish about winning a Pro Tour or becoming the World Champion. "I have a full time job, I write computer programs for a bank. Magic isn't my life, it's just a hobby."