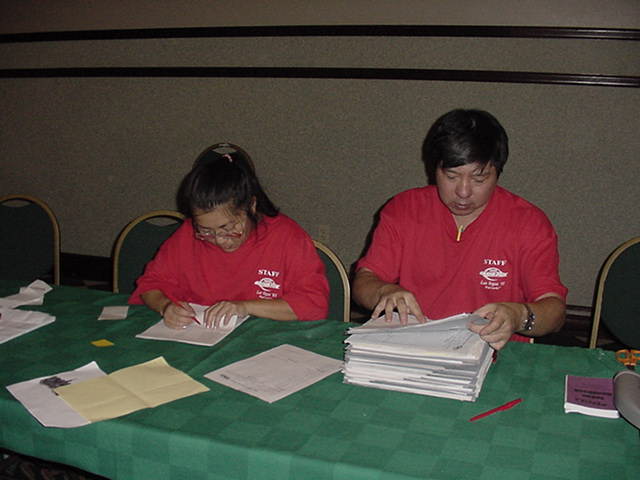 Rick and Connie Takenaga are legends on the Grand Prix circuit. You've probably never heard of them, but tournament organizers around the country all agree that the Takenaga's are broken. Their specialty is decklists and when a tournament has 400+ decklists, that becomes a very important job. For GP Las Vegas all 462 decklists had to be checked to make sure they had enough cards and that all the cards are legal. Then they've got to be alphabetized so deck-checks in future rounds are possible. Finally they've got to make sure they actually have a decklist for each competitor.

They were finished their job with 10 minutes left in the first round.

Rick Takenaga is no stranger to detail work. He's a Senior Criminalist in the Bureau of Forensic Services in the Office of the Attorney General of the State of California.

"I am proud to say I discovered them," explains North American Tournament Manager Scott Larabee. "They started coming to the Women's Center [outside Los Angeles] when I was running tournaments there and their son James was playing. They volunteered to help out and then I passed them off to Dan Gray when I left [to join Wizards]. They're busted." Scott just shook his head and again muttered "Busted."

The final tally for this Grand Prix was 6 game losses and 6 match losses:

6 illegal main decks (all less than 60 cards)
6 illegal sideboards (some with more than 15, some with less)
1 person forget to list a sideboard
1 person turned in two (identical) decklists