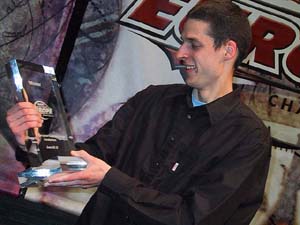 The very same day as the German team lost to Brazil in the World Cup finals, Germany got its first European Champion of Magic: the Gathering. David Brucker, a 20-year-old player from Münich, took his Psychatog deck all the way to the top to become the 2002 European Champion. "I never intended to win, I just wanted to travel and play some Magic," Brucker smiles.

While most other players knew they were going to the European Championship a good while in advance, David Brucker decided to go merely a week before the event. The 20-year-old is currently finishing his civil service, he has three months left of his job at a hospital. He got invited to the European Championship on rating, but he had to wait and see if he could get time off.

Now, he is pretty happy that he got to go. You don't earn a lot doing civil service, and Brucker wasn't invited to the 2002 World Championship in Sydney, either. The victory changed that, and earned him not only 15 000 US dollars, but also an invitation to Worlds. And while he was a rather unknown guy before Euros, his name will definitely be on people's lips now that he has a title attached to it.

"I don't think anyone knew me, I didn't have a single feature match before I made the Top 8. Many Germans didn't even know me," David says. Before the 2002 European Championship, his biggest accomplishment was finishing second in the team tournament of Worlds 1999 as a member of the German team. Individually, he has never made day two of a Pro Tour. In many ways, he is just a regular player that plays Magic three or four times a week in a store in Munich. He didn't playtest for the European Championship. The foundation of his success was laid in that store through a lot of playing and drafting just for the fun of it. "I don't take the game too seriously. It's not a job, I just play for fun—and a little bit the money," he grins. 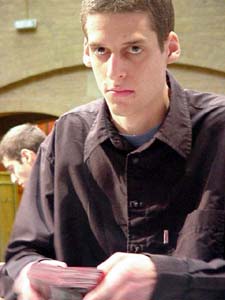 Brucker went 6-1 in the draft portion of the Euros. Previously, he has often listened to other players draft strategies, and let them tell him what and how to draft. This year, David trusted his own instincts. "I tried just to do my stuff," he says, a strategy that seemed to work out excellently. After the strong start of the tournament, he finished the job with a techy version of Psychatog. Brucker playtested with Christoph Lippert, and Lippert came up with the idea of removing the Nightscape Familiars for Chainer's Edicts to make the deck stronger against red and green decks.

Brucker smiles a lot, and he has a very pleasant personality—which is one of his strengths as a player. "I don't get angry if I get bad draws," he says. "I always try to be nice, even when I'm losing. Some people just don't handle losing." David also has rather modest ambitions Magic-wise. Several times, he has been qualified for Pro Tours without actually attending them, sometimes because of money, sometimes because of time. "When I finish my civil service, I will try to play some Pro Tours. I want to play Worlds in Berlin next year. That is my goal," the European Champion says.