Zhiyang Zhang and Tong Wu are two thirds of the Team China that became the first in history to win the Team World Championship in Rome, 2009. Since then they have traveled the globe competing professionally. While other Chinese players have done well in the past—Ming Xu became the first mainland Chinese player to Top 8 a Pro Tour in Kuala Lumpur)—Zhiyang and Tong are some of the first to travel extensively. I took the time to catch up with them at Pro Tour-San Juan, with help translating from Edwin Zhang, who was judging the event.

The question most pressing was why these two players had decided to begin traveling for events when so few of their countryman had in the past. "Well, we were Qed," Tong Wu said. "The Pro Tour is more interesting compared to other Magic events. There are better players, and I like the challenge." Challenge yes, but one the two were up to meeting if Zhiyang's Grand Prix Top 8 in Kuala Lumpur this season is any indication.

I asked if they had specific goals for the season, and while Tong pointed out he just wanted to do the best he could at each event, Zhiyang could barely contain himself. "Level 6!" he exclaimed, a huge grin spread across his face. Tong, a reporter in his day job, isn't qualified for Pro Tour–Amsterdam just yet, but plans on attending if he gets there. Zhiyang, a college student specializing in International Business, expected to have to miss Amsterdam due to his school schedule but was anticipating being in Chiba, Japan for the World Championships. 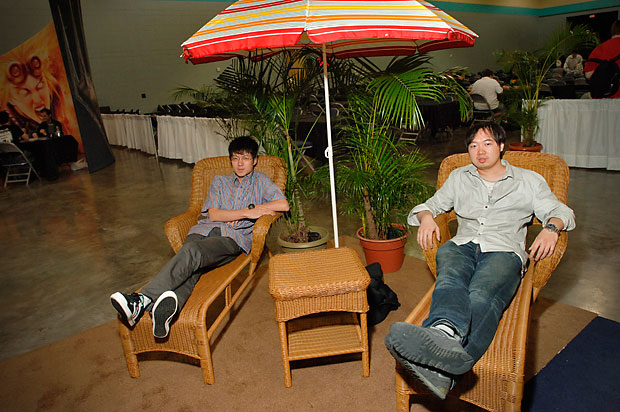 So how has international travel been on the two globetrotters? "We come early to enjoy places," Tong Wu explained. "When we travel it's not stressful." Zhiyang confessed he wasn't one to particularly enjoy where he was traveling to in particular, but rather wanted to win, "I care about whether I win or I lose, though I don't worry about who I beat. I'm not a person to really enjoy traveling much." The two continued to explain they found people in the United States to be friendlier and funnier than most, while they felt Europe had the better food and culture.

Before Japan, the reigning Asian superpower on the Pro Tour, rose to its heights in competition it suffered from almost being completely cutoff from the American and European communities that dominated the early days of the Pro Tour. Did the Chinese players find similar barriers in interacting with European and American players?

"We interact with people during the Pro Tour, about sideboarding and the event," Tong explained.

"We practice together mostly, though," Zhiyang clarified, before pointing out that they did interact with non-Chinese pros on Magic Online. Both admitted they work to interact with players when they could while at events.

After Carlos Romao became the first South American player to win a World Championship, Brazil exploded onto the tournament scene, with Paulo Vitor Damo da Rosa and Willy Edel joining him amongst the game's elites. Had Tong and Zhiyang's team championship had any such impact on the players they played with in China?

"We used to get 40 players for a Grand Prix Trial," Tong said, "now we get 90 or more!" I guess that means the answer was a resounding "Yes!" but translator Edwin Zhang pointed out why that might be the case. When the two won they found themselves media darlings of a sort, fielding interviews on TV stations, over the radio, and in newspapers across the land.

"We've had a lot of newcomers into the game after winning Worlds," said Tong.

I couldn't help but feel, sitting there chatting with Zhiyang and Tong in the twilight of Pro Tour-San Juan, that I was talking to a preview of the future. I asked them what their prediction was for Magic in China over the next five years, and Tong's face lit up before he replied "There will be many, many more pros!" With China set to become a global superpower, I couldn't help but wonder if the gregarious, polite players sitting in front of me, with their flawless English but insistence on having a translator for fear of coming across in a poor fashion, were the start of something big. We will see what the future holds for Tong Wu and Zhiyang Zhang, but China is almost certainly going to be popping up on Pro Tour fan's radar more and more in the coming days. For Tong and Zhiyang? They at least had a weekend left of fun and sun in San Juan.