or Tamas Glied, making it into the Top 4 was a joint effort. While he felt confident in his chances in Standard, Modern was a weak point for him due to his lack of understanding. "Matej Zatlkaj helped me with Jund, and Modern was the format I feared the most since I don't play a lot of Modern," Glied said.

For Standard, however, it was different. Glied felt confident in his chances going into yesterday's Standard event. "I think I have a good chance," Glied said in regards to his chances in his Semifinal match. "I would be much happier to choose who starts, since the blue versus black match-up is heavily determined by who is on the play."

Cory Lack, a player who felt out of contention in Day One, rallied forward in the second day, simply hoping to play better. With the pressure feeling off, his chances so low of reaching the Top 4, Lack felt more relaxed, and his play improved. Before he knew it, he was in contention for Sunday after a huge run in the second day, ultimately winning his win-and-in in the final round of Standard.

"I really liked the Modern deck I went with, and if I were to choose my Modern deck all over again I would still play it," Lack said. "For Standard, it's too early to tell, since I still have potentially two more matches. I think my Constructed decks were fine at worst, and quite good at best."

"I think this match-up is pretty good for me," Lack said about his upcoming Semifinal match against Glied. "I think one of the draws for Blue Devotion is a good Black Devotion match-up. I would rather play against Ashiok, Nightmare Weaver than Nightveil Specter. I could be wrong, but I feel I have an advantage." 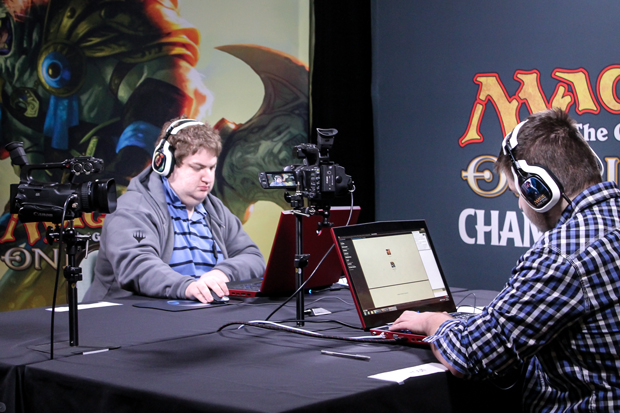 Indeed, both players had different perceptions on the match-up, but only one would be correct.

The splashes for both players were seen in full effect during the first game, where Glied's second-turn Pack Rat, normally a way to completely take over a game against Blue Devotion, was shut down early by Detention Sphere. Glied's draw, however, was set with another Pack Rat, and with the Rat being his only game plan based on his draw, he just had to go for it.

With no Detention Sphere immediately ready, Lack's only option was to slow Glied down with a glut of threats. Master of Waves with Cloudfin Raptor in play forced two removal spells from Glied, the first a Devour Flesh to take out the Raptor before it grew, and the second a Hero's Downfall to shut down the Master of Waves. 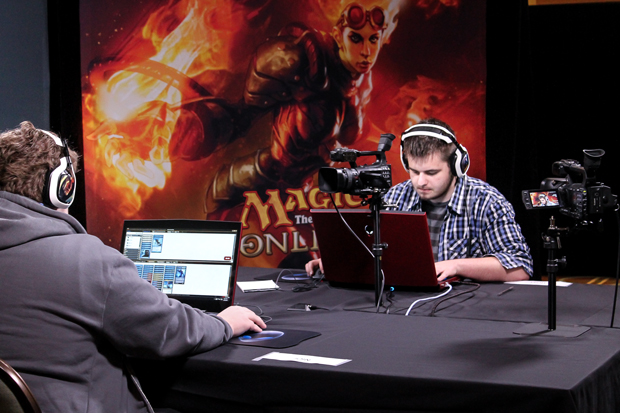 Glied fights back through Lack's teched out Blue Devotion strategy, hoping to overrun him with Pack Rats before they are put in detention.

However, when Lack found a second Detention Sphere, Glied found himself out of threats and out of options. When Lack's board re-developed with creatures, including Thassa, God of the Sea, Glied was quick to move to a second game...

And to cement the match in his favor, a Detention Sphere from Lack shut down Glied's only mustered offense: a small Pack Rat army. A rye smile from Glied signaled defeat, and after another turn, the concession was offered.

"I think my draws were above average in both games, especially Game 1," said Lack after the match. "In Game 2, I still drew pretty well and he had to mulligan to five with only one black source. I do like putting on a show. I'd like them to be awesome games. I'm happy I won, but I'd of liked to make it fun."

While the game was anticlimactic, a win is a win. Lack would have a chance at an exciting match in the finals.

Cory Lack defeats Tamas Glied 2-0 and advances to the Final!