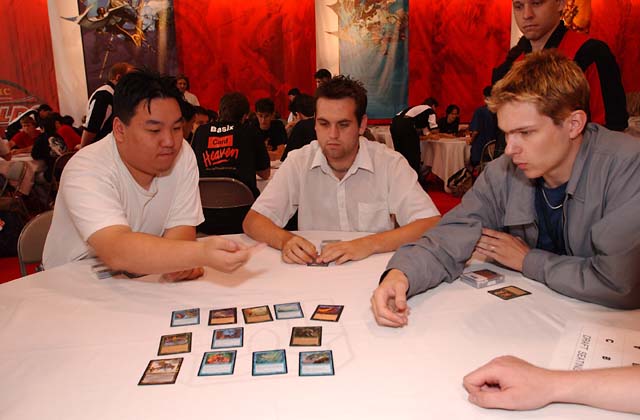 Many people had their eye on Team Canada coming into the Worlds team competition. The hometown team had as good a one-two punch as any other country with Terry Tsang and Elijah Pollock, they made the finals last year, and they're the only team other than the US to ever win this competition. However, with just three Rochester Draft rounds to go, the Canadians were a disappointing 10th place. Since each match on Saturday is worth 12 points, they could still mount a charge, but they needed to start immediately. Their opponents were from Finland - one of the traditional powers of European Magic, national champion Tomi Walamies is fresh off a 3rd place finish at Euro's.

Elijah Pollock told me afterwards that he though Team Finland really bungled their first pick. Pollock seemed less than impressed with Urborg Emissary "unless they were just trying to throw me off."

Finland's draft style was disconcerting at first. The players make no gestures whatsoever. Wall and Perala simply wait patiently while Walamies thinks about the pack. Eventually, Walamies tells them what to draft. He calls every single pick they make by waiting for the judge to announce "draft" and then pointing to a card for his teammate to draft.

This has been an oft-debated subject when it comes to Team Rochester: should one person call the entire draft or should each team member be responsible for figuring out what is best in his own matchups. Most of the top Pro teams seem to give decision-making authority to each individual, but acknowledge that if one person could keep the details of all six decks and all three matchups straight in his head, then it might be better to have one person make all the picks.

By this point both teams knew the basic structure of the draft: three mirror matchups. Both teams put green on the left, blue in the middle, and red-black on the right. Now they had to figure out how they were going to gain an advantage somehow.

Terry Tsang made the strong strategic move of gaining an advantage in his matchup by opening up a Ghitu Fire. Walamies got the only Recover that was opened during the draft - a key card in black-red versus black-red.

Here the Canadians got a Dragon for their five color green deck, but two other picks were particularly noteworthy. Walamies took Obsidian Acolyte for his red-black deck, thinking maybe he would splash white to gain an advantage over Tsang. Tsang, meanwhile, showed that he doesn't believe in counter-drafting because he let a Thornscape Apprentice (the green tapper) go back to the other team 8th so he could draft a much weaker card (Defiling Tears) for his own deck. This is another oft-debated point of Team Rochester strategy - How important is it really to deny good cards to the other team?

Here Walamies takes his second straight Obsidian Acolyte and from this point on he drafted a red-black-white. This was also the only pack of the entire draft where one of Finland's players disobeyed an instruction from Walamies. Wall took Wallop over Planar Portal because he remembered that his opponent had already drafted Crosis. Walamies immediately realized his teammate was right and gave him a thumbs up, forgiving him and acknowledging that Wall's pick was the right one.

Here come "Black-a-lyte" #3 for Walamies and Perala should enjoy that Serpent in his blue versus blue matchup. Walamies told me later that he considered it a tremendous advantage to get to draft three Acolytes for his match and he spent the ret of the draft trying to accumulate ways to protect them (he wound up with Pollen Remedy, Squee's Embrace, and Sinister Strength) and trying to deny answers to Tsang (so he instructed his teammates to counterdraft cards like Singe and Bloodfire Dwarf - Tsang wound up with only 1 Singe and 1 Dwarf as answers). 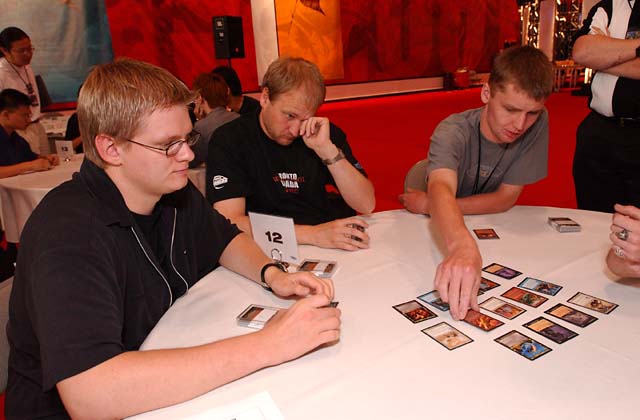 The Finnish Team drafts The Canadians considered several options for this pack. All of them involved Tsang drafting Magma Burst, but they debated whether perhaps Lount should take the big hippo while Pollock took Silver Drake. Up until this point, Pollock had no green cards for his blue-white deck, but he did have a Tribal Flames and a Lightning Dart. With Apocalypse coming up soon, I thought they would have been better off leaving Pollock's deck as a "wedge deck" (a friendly pair plus their shared enemy) instead of turning it into an allied triple.

Walamies called a very good draft. In particular I was impressed by the way he kept track of all the color-hosers. Cards like Slingshot Goblin look innocuous since they most players spend most of their time doing individual drafts where you don't know who you're going to be playing against, but they are absolutely game-breaking in Team Rochester. In this pack Walamies made sure that Slingshot Goblin wound up in his Perala's stack of cards. This way, if some more red cards came along later, Perala could use the Slingshot Goblin against his blue opponent.

Lount seemed unhappy when his teammates told him to D-up the Confound here because he wanted Gerrard's Command for his own deck, but he followed orders. This was particularly interesting since when Tsang's own deck was in a similar position, he took a weaker card than Command (Defiling Tears) while letting the other team have a stronger card than Confound (Thornscape Apprentice).

Perala pointed at the Slingshot Goblin and turned to Walamies to se if Walamies wanted him to draft a second one. Walamies considered that, but noticed there wouldn't be a second good card for team Finland to take if they did that, so he had Perala take the Rushing River instead.

Perala asked (with gestures, of course) is Wall should take Cromat, but Walamies said no. He obviously has little respect for the five-color monster since he didn't even D it up 7th or 8th. What Walamies did have respect for was Jaded Response. He seemed very pleased when I talked to him after the draft that he managed to get two of them into Perala's deck for his mirror match.

Tsang expressed regret about this pack after the draft. He asked Lount to D-draft he Arena so Walamies couldn't have it, but later realized that the card Walamies did draft - Captain's Maneuver - is probably better against him than Arena. Tsang's deck is very aggressive and his basic plan is to beat down early and then finish with Ghitu Fire or other random damage. Arena isn't as exciting against that plan, but the Maneuver could make it hard for him to finish.

All in all I thought the Finns outdrafted Team Canada. I was very impressed with Tomi Walamies, especially his ability to improvise based on what the packs gave him and his ability to squeeze every drop of value out of the cards on the table by putting them all in their most efficient matchups.