Rob Dougherty was walking around the site this morning without his usual YMG tee, opting instead for a Hawaiian –style button down shirt. It is extremely likely that he ran out of the ubiquitous dragon emblazoned shirts. In addition to his usual squad of players, the US Nationals team was decked out in Your Move Games gear for this tournament. While Joshua Wagener is the captain of the team in name; Justin Gary is their spiritual leader. He trundled the whole gang up to Boston for the weeks leading up to Worlds for round the clock playtesting. They had access to all of the Your Move Games deck lists and –more importantly for this event—had the opportunity to practice Team Rochester against the best teams the Northeast had to trot out against them.

The American team was trying to catch up in the standings to the front running Finnish team and this would be their best chance to close ground. Before the draft started, Arho Toikka had not yet shown up. Gabe Walls was excited, "Only two out of three players? We have a shot!"

Gabe was largely kidding. The teams were fairly balanced. Tomi Walamies and Justin Gary have had comparable careers with an edge going to Justin. They were both paired up against the unknown player on the opposing team. Tomi's counterpart in captaining the team was Joshua Wagener. Justin was facing off against Arho Toikka. 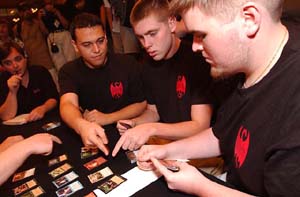 The most exciting match was the undercard to tomorrow's Top 8 match between Tuomo Nieminen and Gabe Walls. In less than 24 hours they would square off again in a highly debated match-up of Wake vs. Slide.

After a little banter—mostly initiated from the American side of the table—the draft was underway.

Justin: "Have you guys ever heard of McDonalds."

Tomi had no retort for Justin but rest assured he would quietly get his digs in later on in the match.

There was some concern from Josh about passing the Gustcloak Harrier but Gabe waved the popular flier off and insisted on the Firecat. Having Joshua kick things off with green in the B-seat was somewhat unorthodox but that did not stop Tomi from putting a Harrier in front of it with his pick.

Tomi was in no way committed to white based on one card but he put his thumb squarely in the black pie to mark it as his with the Pangolin and a zombie on the way back. Josh was shaping up as green-black, while everyone else was still in flux. Tuomo's Skills were a pretty good indication that he wanted to go blue-red.

Arho was settling into firmly into green-X with a Veggies and Tomi shifted toward black-blue. If Joshua invested many of his picks into Gournas the Finn would have to get through with another form of evasion besides flying and white offers little in that regard.

Tomi found the evasion that would get past Gournas. The only problem was that Joshua—who had already picked up a Swat—had not settled into his second color and could easily go black.

Joshua's teammates strenuously indicated that they wanted him to take the Krosan Groundshaker but he wanted the Wirewood Herald. Justin seemed frustrated by his opponent having the trample machine instead of his teammate.

Tuomo's eyes bugged as Tomi insisted that he select Gustcloak Harrier over defensively drafting the Mythic Proportions. Tomi was the person that would have to cope with the +8/+8 enchantment so Tuomo acceded to his captain's wishes. Gabe seemed skeptical that the Gustcloak was even the best white card in the pack and happily thumped the Inspirit into his pile.

Justin spanked his pack before he opened it. This was USA's last chance to open any Onslaught lovin' and needed some card for his so-so blue-red collection of cards. Justin and Josh were rewarded with solid cards but they crossed their fingers at Gabe indicating a counter draft. They couldn't get on the same page as to Swat vs. Wellwisher but they finally arrived on the cycler and Justin's opponent got the stall generating elf. 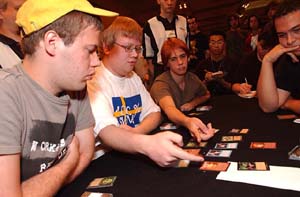 After the first set of packs the decks were starting to take shape. Tomi had the deepest deck at the table; a blue-black number with plenty of flying but no removal. He did have Cabal Executioner and a pair of Haunted Cadavers to help him exploit the Cover of Darkness-if Josh didn't go black as well. Josh was largely green with a few black cards but he could go with the flow in the next pack and take what came his way.

Gabe Walls and Arho Toikka were building up their red-white arsenals for a bizarre mirror match but both of their colors could easily change in the coming packs—nothing was so amazing that they had to dig in their heels.

Justin Gary could go in any direction. He had some blue-red cards and he had some black cards. Any permutation of the three colors was a possibility. His opponent was green and large with a pair of Lorians and a Groundshaker. He would probably want to pick up some Skinthinners in the next pack to cope. Blue-red is not the best deck to put up against green fat.

As soon as Justin picked the Shifting Sliver, Tomi acted as though he made a mistake. Remember, he was looking for non-flying evasion and with his mistform creatures the sliver would have been a nice fit for his deck.

The Skinthinner meant that Justin was making the move to black—how would that effect the b-seat which needed black to counter Tomi's fear effects?

It took some convincing to get Josh to pick the Keeneye. It was a counterdraft that could become another color option. When his mates indicated that it would lap to Tomi he was convinced. It was starting to look like Justin was bailing on blue in favor of black-red.

A counter draft signal indicated that Justin had abandoned blue even though he took the Mangler. Josh was getting into the green-blue plan and gladly took his second Keeneye. Tuomo was impressed with his second Stinger but it was clear from Walls face that he didn't think highly of the amplify soldier.

Josh's teammates wanted him to counter draft the Deftblade but he refused, staunchly defending his choice of Brontetherium. Justin shrugged and jumped on that grenade himself since there wasn't anything he wanted as badly as Josh wanted the beast.

At the end of the second set of packs, Tuomo had two Daru Stingers and about seven soldiers all told for his red-white deck. Arho had an army of monsters and the Wave of Indifference to get them through for the killing blow. Tomi was still blue-black and was still shy removal but looked solid.

Team USA debated intensely—although silently—over Josh's pick. His teammates felt he should have taken the Warchief—he had zombies to actually take advantage of it—rather than let Tomi abuse it. Gabe could not take it—he was light on actual cards and needed the Zealous Inquisitor.

Gabe was not soldier-heavy but the ones he had all featured provoke—a pair each of Deftblades and Lowland Trackers. He laughed—he couldn't let Tuomo have it.

Finland could not decide between Dragon Scales and Aven Liberator for Tuomo's pick. Scales is clearly the better card but with two Stingers he needed ever soldier he could lay hands on. Plus, he did not want the Scales to go to Gabe with four provokers. Arho offered to counter the Scales but in the end Tuomo took the powerful enchantment.

When Tuomo failed to "D up" the Ambush Commander one of the spectators shouted out a sarcastic, "Yay, Finland." Tuomo thought about taking the Goblin Warchief but not the ridiculous elf.

Josh was decisive this pack and insisted on the Dead and his teammates had no objections. Tomi picked up a key card in the match as well in Coast Watcher.

USA was thrilled with their last pack. Tomi was very excited as well. He locked onto the Unspeakable Symbol immediately and knew it would be his. Tuomo ended with a solid soldier wheel and an 'answer' to Eternal Dragon.

After the draft both teams felt they had gotten the better of the other. Most observers felt that Finland had vastly superior decks but Team USA was confident. Gabe Walls dismissed the notion that he should be intimidated by a pair of Daru Stingers, "What does he have eight or nine soldiers? They're not good. That's what playtesting told us."

He went on to explain that the only thing that was set about their draft was his colors. He would be some combination of America's colors in each draft and the other two players would react to what their opponents were drafting, "Strictly reactive. This format is not like the last ones where match-ups are important. It's all about the cards themselves. You have to react to your opponent's cards."

Gabe felt that the two teams had opened pretty evenly but that USA had come out on top because, "They passed us their rares." He was referring to Ambush Commander and Mythic Proportions.

Gabe's deck looked solid although it came up a card or two short and he was debating between Daru Cavalier and Foothill Guide for his 22nd card. Justin and Josh were playing three colors. Josh was forced to play with nineteen lands due to Ambush Commander and Mythic Proportions requiring a lot of green. Justin was shaking his head. He was very unhappy with the deck and was janking it up to try and eke out an unlikely victory.

The leader in the jank department was Skirk Alarmist. Apparently he had some success with it in a draft last night and was thinking about running it today. He was just about to relegate it to the board when he noticed it was a wizard for his Skills. His other wizard? Scornful Egotist.

Tomi Walamies felt that the two countries were evenly matched. If there was slight edge he was going to give it to his own team, of course. He was very upset about a handful of picks. He should not have let Josh get any Naturalizes after he got the Cover of Darkness and he was still sore about the Shifting Sliver.

Tuomo was pleased with his deck but Arho was running three colors—splashing for Rush of Knowledge—and his deck seemed a little top heavy.

1 Words of Worship 1 Wall of Hope