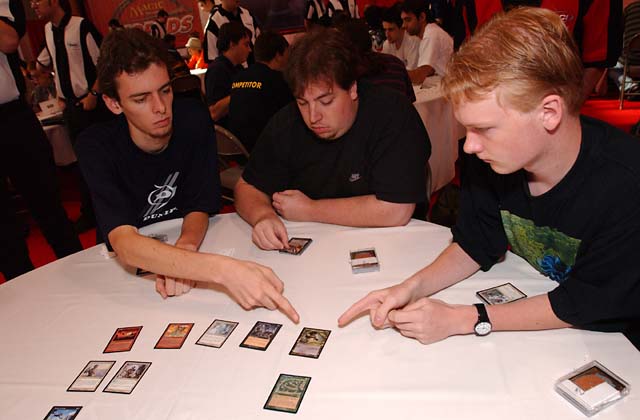 The Netherlands came into Saturday with a 12-point lead in the team competition, but with the points increased for the Team Rochester Draft, that amounts to just a single individual match. They took on Team U.S.A. in the first of Saturday's four rounds. Wednesday, Thursday, and Friday were really just for positioning. It's the twelve matches on Saturday at twelve points each that will really determine which two teams get to play for the title on Sunday.

Each of the players on the Dutch and American teams had a decent amount of practice at Team Rochester, but each team had only one draft worth of experience together and for each team that practice draft took place yesterday. The seating order for each team in this competition is locked in by their finish order at their respective national championships - the champs/captains go into seat A, the runners-up sit in seat B, and the third place finishers are in seat C. They then play against the person from the opposing team who finished in the same place they did.

The USA won the coin toss and elected to force the Dutch to open the first pack.

The Dutch, in unison, immediately pointed at the Probe and then at Frank Karsten. Clearly they wanted their blue-black (and probably white) control player on the left. They debated about their next pick and decided that Assault/Battery would fit into their middle seat.

The Americans had no trouble deciding what to do with this pack. They clearly wanted Blackwell to have the Duskwalker, because they wanted him to go black-red. They clearly wanted Harvey to have the Serpentine, because they wanted him to be the green mage. And their plan called for Hegstad to draft blue-white so Wash Out fit right in, especially against a budding green deck on the other side.

Another straight-forward pack, but it indicated an interesting contrast between the two teams. While both teams agreed that the right-hand seat should go black-red and possibly splash blue, they disagreed about which seat was the better green seat and which was the better blue seat. The result was one mirror match shaping up - between the champs - and then a pair of green versus blue matchups. Remie seemed quite happy to get a Simoon for his upcoming battle with Hegstad's blue-white.

Harvey seemed very eager to draft Ordered Migration. At this point he expected to have a lot of different basic land types in his deck, so he expected it to produce 4 or 5 birds. His teammates gestured toward the Harrow and then shrugged, questioning him, but Harvey was confident and they seemed to trust him.

Knowing that he was playing against a green deck, and knowing that it wasn't possible to give the double-black Reckless Spite to his teams one real black player, Hegstad decided to shift his control deck into a blue-black splash white version so he could draft and play the Spite. Blackwell pounced on the Obsidian Acolyte, thinking he might splash white to break the symmetry of his black-red mirror. The Acolyte could be a wrecking ball in that match-up.

This seemed like a great pack for team USA. They got five great cards for their decks, while surrendering only Nightscape Master and a couple playable creatures. 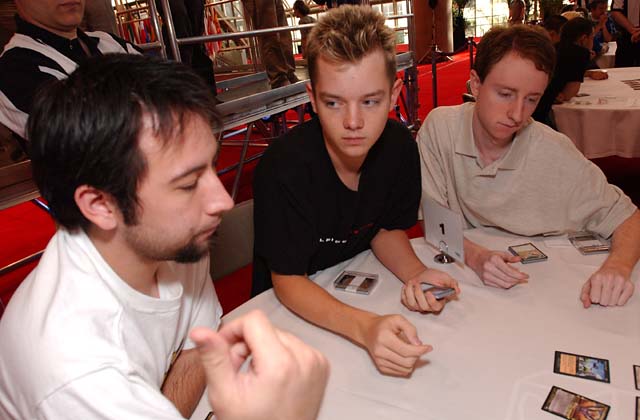 The US Team drafts I was a little surprised when the Dutch gave the double-black removal spell to their five-color green player. Five-color decks seem good at getting one of each color and a lot of green, but getting a second black mana might be challenging. I think they feared that the Annihilate would be wasted in van de Logt's deck since Blackwell is running black and the Annihilate only hits non-black creatures. However, Blackwell's creature-base was mostly red at this point so I thought they would have been better off with Annihilate in van de Logt's deck, Harrow in Remie's, and Pouncing Kavu heading over to the other team instead of Harrow. Harvey's wheel of Harrow-Fertile Ground helped his deck out tremendously as it was his first and he wound up with only one Quirion Explorer for mana fixing during all of Planeshift and Apocalypse.

This is exactly what van de Logt was hoping to open: Magma Burst. The US got some decent cards, but nothing that compares to Magma Burst.

The Americans still weren't sure what Blackwell's splash color was going into this pack. Neither Hegstad nor Harvey could support Crosis's Charm, though, and they didn't want to pass it either. Meanwhile Blackwell had only the one Acolyte in white and he did already have a Recoil as a head start on blue. Thus they gave him the Charm and he started leaning toward blue.

This was another tough pack for the USA, and it worked out to be a great pack for the Dutch. Blackwell and Hegstad considered putting Hunting Drake into Blackwell's deck, but Blackwell wasn't sure if he was playing enough blue to support it and he also didn't seem confident in how good it would be against van de Logt. At this point, van de Logt had about four red creatures that seemed destined for his main deck. If Blackwell takes Hunting Drake then Hegstad would get to take Lashknife Barrier. Both cards are good in Hegstad's match, but then they would have been passing a Mire Kavu instead of a Lashknife Barrier. As the Americans played it, they gave the Dutch both Lashknife Barrier and Questing Phelddagrif. Ouch.

Karsten made an interesting pick for his black-blue-white control deck here: Aurora Griffin over Silver Drake. With one Silver Drake and a Sawtooth Loon already in his deck I guess he was worried about getting too much gating.

This was probably the most controversial pack of the draft. Hegstad insisted that he wanted Stormscape Familiar for his deck while both his teammates kept pointing at the Silver Drake. Hegstad already had two Silver Drakes and a Cavern Harpy, so he ignored his teammates and stuck by his Stormscape Familiar. He was still defending his decision during deck construction while Blackwell kept pointing out that now Harvey would have to play against another Silver Drake.

Magma Burst #2 for van de Logt gives him a tremendous leg up on Blackwell, who didn't get any.

Blackwell didn't seem excited about it, but he followed Hegstad's instructions and took Minotaur Illusionist so Harvey could draft the Illuminate. Hegstad seemed to slid into a captain-like role during the draft. The combination of his seat (in the middle) and his personality resulted in him dictating picks to his teammates while they rarely dictated to him.

Hegstad and Blackwell smiled at each other as Blackwell's blue splash finished taking shape with this Jilt. Meanwhile Harvey was delighted to get a Dodecapod since he remembered that Karsten (his opponent) had two Probes and a Bog Down already.

Team USA's first instinct here was to give the Coalition Honor Guard to Hegstad and they were debating Consume Strength versus Savage Gorilla for Harvey. However, after Hegstad watching Harvey thumb through all his cards, they realized that Harvey didn't really have any reason to play black and they shouldn't really add black cards at this point, especially since the Dutch would be unable to play both the Gorilla and the Consume Strength anyway. Thus they decided to give Harvey the Honor Guard (it's better against Karsten's blue-white than Remie's green anyway) and Hegstad got to take a solid flier for his own deck.

Here van de Logt used an early pick on a second Quicksilver Dagger. They don't seem all that impressive against a black-red deck full of removal.

Van de Logt evened up the Jilt count in his matchup at one each with this pick.

All in all, Blackwell's deck seems better than van de Logt's if you look at card number three through card number twenty-three. However, those two Magma Bursts are just a lot better than anything Blackwell got to draft. Hegstad's deck also looks deeper than Remie's, but again the Dutch player is the one with the bomb: Questing Phelddagrif. Harvey wound up with a lot of white cards so his deck is more of an aggressive green-white that's splashing blue than a five-color deck. The Americans seemed very confident after the draft - delighted with how the draft had gone. The Dutch seemed nervous, saying "maybe it's 50-50." However, I think those are cultural differences showing for, with the Americans being typically brash and the Dutch more reserved. I think either team could win this and play skill is going to make a big difference.