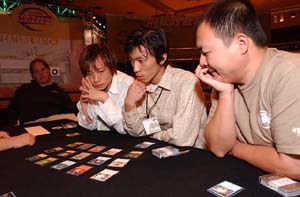 Damizet opened the first pack, and took Pacifism, while Meraghni took Grinning Demon. This set France into the commonly accepted strategy of putting white in the B seat, and black at C. Gong took Daunting Defender, Li Nantuko Husk, Xu Serpentine Basilisk, and Ruel got a wheel of Vitality Charm and Spined Basher. With the first pack, the French had set their seats for optimal picks in every color in relation to the packs, while China had put white at seat A. This was fixed in the next pack, as Meraghni opened and took a Cruel Revival, leaving a Krosan Tusker for Gong, showing that he'd be leaving white in the A seat, and going into green for the most picks at Legions green. Li took Grassland Crusader, and Xu picked up Imagecrafter. Gong's pack cemented him as a green drafter with Snarling Undorak, and Li drafted Swat. Xu took Wave of Indifference, and seemed to be all over the place with his colors. Ruel drafted a second Vitality Charm, and Damizet wheeled Daunting Defender and Doubtless One. As the pack came around, Li got a late Misery Charm, a great pick after Damizet's two Clerics.

Li picked up yet another great black card in Cruel Revival, and Xu started to settle into colors a bit, taking Mistform Shrieker. Ruel picked up Wellwisher, Damizet took the dependable Gustcloak Harrier, and as the pack came back around, Ruel took Death Match- a great card in green/black. When Ruel opened his pack, it was perfect. Damizet got Callous Oppressor, Meraghni drafted Slice and Dice, and there was hardly anything playable left. With Onslaught done, France had put their colors in the seats that would maximize the best picks, while China had a similar plan, although Xu was in blue-red at the C seat, where you typically want a black deck.

Still, switching Gong into green yielded immediate results. He was able to pick up two Timberwatch Elves, while Ruel got one. Legions also helped the Chinese team immensely by giving Li a pair of Aphetto Exterminators. Farid got more removal in the form of two Skinthinners, and two Deftblade Elites made their way to Damizet without much of a fight. Before Legions was over, Ruel picked up a bomb in Havoc Demon, and was visibly distraught at his lack of ways to deal with Gong's Timberwatches. 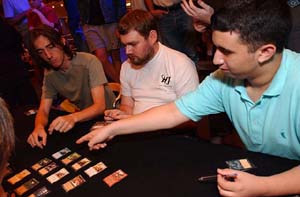 In the first Scourge pack, France got a nice gift in Siege-Gang Commander. This made Meraghni's deck even better against Xu's, which wouldn't have much of a chance. When Gong opened his pack, he first picked Elvish Aberration. Li followed with Twisted Abomination, and Xu got Torrent of Fire. This let Damizet get the Dragon Scales that his two Deftblade Elites were clamoring for. It may have been a mistake for Gong to take the Aberration there, since it isn't a terribly exciting card, and handing the Scales to Damizet gave his deck potential for an Elite/Scales draw, which is very hard to defeat.

All things considered, this draft favors France. Meraghni's deck is filled with efficient removal, and has a huge bomb in Siege-Gang Commander. Ruel's deck is solid, and Gong will have trouble dealing with Havoc Demon. It is likely that Gong has a slight edge thanks to his two Timberwatch Elves, but Ruel has a Timberwatch of his own, as well as two Wellwishers. The match between the national champions should be very interesting, as Li has two Exterminators and a Dirge of Dread to punch through, but Damizet has a fairly aggressive blue/white deck with many fliers that can simply out-tempo Li depending on the draw.