Team Draft 2: Germany vs. The Netherlands 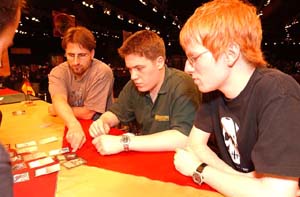 This is the one we've all been waiting for: the Germans versus the Dutch. These two national teams have both been anointed as the proper successors to Team USA as Worlds team champions, but (with apologies to the dozen other countries who still think they're in contention) only one of these two will actually get to win. The winner of their round 20 feature match will have almost clinched a seat on stage on Sunday while the loser will have some serious work left to do.

Kai Budde has played a lot of great Magic over the last two years, but nowhere has his dominance been as complete as in Team Rochester Draft. He eschewed several offers from top pros so he could play with his friends at the last team Pro Tour and then won it anyway. At the most recent Team Masters, Kai's Phoenix Foundation was victorious yet again and he, Dirk Baberowski, and Marco Blume have already begun practicing for their next big team event: Pro Tour Boston. That means not only did Kai bring his immense talent to the German national team, but he also brought a lot of experience with Odyssey-Torment-Judgment Team Rochester draft.

Germany was in first place when they sat down with the Netherlands sitting in second and trailing by just 2 points. The Dutch had been the happy recipients of a free win when one member of the (then 4th place) Finnish national team failed to show up Saturday morning. Germany had a much rougher go of it, edging out Argentina with mere seconds left in an extremely close match.

Germany won the die roll and forced the Dutch to "kick off." Noah Boeken took Cephalid Looter. Kamiel Cornelissen got the second pick and selected Nantuko Disciple. Mark Ziegner – sitting in the obvious black seat for Germany – then took a Dirty Wererat and Kai was ready to counter-punch, drafting a Deamwinder to run against Boeken (and a second Dreamwinder from the next pack). The Germans were delighted to draft Whispering Shade into Mark Ziegner's deck out of the second pack since they knew the Dutch had to put black in their own A seat, or risk passing way too many good Torment cards.

Budde declined a Balshan Griffin in order to draft Bomb Squad in pack 3. He seems to love splashing red against blue-white, having done the same thing in the previous round for an Arcane Teachings. He then directed Felix Schneiders to draft a Chainflinger and that set up a tension that lasted throughout the draft. Basically, Germany refused to pass removal unless they absolutely had to and the Dutch wound up without a single red mage. The Germans, on the other hand, wound up with all three of them running at least a couple of red spells. They may sound bad for Germany, but they only did it because the packs they got to draft from were so deep in red cards. Germany could have gotten away with having just two red mages, but when the first Torment pack came to them with Fiery Temper, Violent Eruption, and Deep Analysis in it, Budde wanted t draft the Deep Analysis for his own deck since it would be so good against blue-white. Thus he cemented both Schneiders and Ziegner in red that pack.

When Kai took that first pack Dreamwinder, he gave Schneiders a Shelter. A couple of packs later he drafted a Rabid Elephant for himself while directing Schneiders to take Mystic Zealot. Thus, Germany wound up with green-blue (splashing red) in their middle seat and white-red on the left. It was hard to tell whether the packs or Kai's preferences put them into this unconventional set-up, but either way Kai seemed confident in all the picks he was calling. 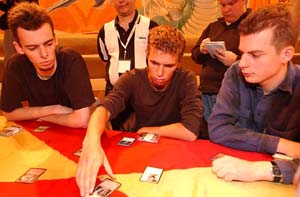 Watching Kai direct Schneider's picks in Judgment was particularly interesting. he took one Phantom Nomad over both Spurnmage Advocate and Guided Strike. Then in the next pack they took another Phantom Nomad over Prismatic Strands and Valor. Schneiders seemed confused at first, but he followed instructions. The next pack had yet another Phantom Nomad, but Germany drafted Battle Screech instead. Next up came the first Arcane Teachings of the draft. Schneiders clearly wanted it, and it would obviously have been good on his phantoms, but there was no good green or blue cards for Budde so he took the Teachings for himself and Schneiders got a Phantom Flock instead. The second Teachings showed up in the final pack of Judgment and Tom van de Logt drafted it. Van de Logt had been exclusively green-black up to that point, but he wound up splashing for his team's only two red cards: that Teachings and a Lava Dart.

At the end of the draft both teams seemed to think it would be close. Budde wound up building a 4-color special to take into battle against Boeken, but he didn't think that would be a problem since Boeken's blue-white deck would give him plenty of time to draw whatever color of mana he needed. Boeken's blue-white looked good, but he decided not to splash for Sonic Seizure and Crackling Club and thus had no answer to Bomb Squad. Dreamwinders also looked like they would be good against him.

Ziegner wound up with nice black-red deck against van de Logt's black-green (splash red). Van de Lot has the only Butcher, but Ziegner has the only Whispering Shade and the only Morgue Theft. The Crippling Fatigue count wound up one apiece so that match looked fairly even.

Each team's worst deck (to my eye) wound up in the C-seat. Schneiders' red-white is quite top-heavy with six 4-drops and an additional five 5-drops. On the other side of the table, though, is a blue-green bad stuff deck that will require every ounce of Kamiel Cornelissen's talent if he is to win with it.

All in all I find it hard to doubt Kai's seemingly eccentric drafting, so I'm predicting a 2-1 victory for Germany.