The winner of this draft should have a very good shot at making Top 2. Aside from that, a win by Denmark would put the United States in contention for Top 2 if they won.

The first pack went very well for Denmark, as Cleeman got Balshan Griffin and Beast Attack went to Laier. Ostrovich went right into the "A" seat red/black plan with Flame Burst, and Michelena took Repel. The second pack gave Laier another great green pick in Wild Mongrel. Ostrovich drafted Engulfing Flames, Michelena took Elephant Ambush to go into his familiar green/blue spot, and Aven Smokeweaver went to Caligaris. Cleeman got some great late picks in the pack as well, wheeling Syncopate and Kirtar's Desire to lean heavily into white/blue. Ostrovich opened and took Patriarch's Desire to lock into black/red, Michelena picked Gorilla Titan, and Caligaris drafted Hallowed Healer to lock into white/blue. As the pack came around Laier went into blue as a second color, wheeling Aether Burst and Dreamwinder. This may have thrown off the Argentineans, since Dreamwinder went from a 4/3 wall to a 4/3 attacker that Caligaris would have to deal with. Before the pack was over, Cleeman got a second Kirtar's Desire.

The next pack was incredibly weak, with Michelena getting a strong Krosan Beast for his blue/green deck, while Whispering Shade went to Christensen to help him out in his black/red mirror match against Ostrovich. The next pack resulted in what could be interpreted as a mistake by the Argentineans. Caligaris took Aether Burst over Hallowed Healer, because he was afraid of giving Laier, his opponent, a second Aether Burst. Still, the Healer is great against blue/green, and would have been perfect for the matchup. What makes this situation even more odd is that Laier just took a Call of the Herd, so it's not as if he got a bad pick. This decision by the Argentineans is understandable, but the reasoning might be questionable.

At this moment things were going pretty well for Denmark, but the next pack made it even better. Christensen picked up a second Whispering Shade, and Cleeman gladly took Shadowmage Infiltrator to splash in his white/blue deck. Michelena's blue/green deck would be incapable of blocking it, much less removing it.

Torment gave Christensen Faceless Butcher, and the pack swung around the table giving Deep Analysis to Caligaris and a still good (but less amazing in the black/red mirror match) Grotesque Hybrid to Ostrovich. Argentina began to clean up with the next Torment pack, as Caligaris drafted Skywing Aven and Michelena got Arrogant Wurm for his green/blue deck. The pack also gave Laier Stupefying Touch, which is a key card for green/blue against white/blue. The next few packs gave Ostrovich Soul Scourge and a Butcher of his own, while Laier got Skywing Aven and Centaur Chieftain (which is great in green/blue). Christensen put together an amazing removal base, highlighted by Violent Eruption, Crippling Fatigue, and Waste Away. The most important pick to come out of Torment is likely the Possessed Aven that got to Cleeman. He was already blue/white splashing black for Finkel, so activating the Aven's ability wouldn't be a problem. Keep in mind that his opponent Michelena was green/blue, and had no real way to deal with an active Aven. In the last Torment pack Cleeman thought about taking Balshan Collaborator, but was convinced to take Skywing Aven instead by his teammates.

The first Judgment pack also went well for the Danes, as Genesis went into Laier's already overpowered deck. Forcemage Advocate and Ironshell Beetle made their way to Christensen where they were counterdrafted, and Keep Watch went to Michelena's green/blue deck, where it would be great. The next pack worked out better for the Argentineans- Ostrovich first picked Ember Shot, Michelena got Phanton Centaur, and Caligaris drafted Wormfang Crab. Still, Laier got an insane wheel of Sudden Strength and Exoskeletal Armor. An odd pick occurred in the next pack, as Michelena drafted Nantuko Tracer over Sudden Strength, which made its way to Laier. However, it wasn't all bad- Spelljack went to Caligaris. The following pack was opened by Caligaris, and was very bad news since it contained both Wonder and Genesis. Caligaris took Wonder, giving Laier his secondGenesis. As Judgment finished up Laier got a Wormfang Drake, and Cleeman took a second pick Venemous Vines, which is odd to say the least.

Looking at the way the draft progressed, it's safe to say the Danes drafted better. Cards that are usually mediocre but great in certain matchups such as Zombie Trailblazer, Whispering Shade and Stupefying Touch were given to Denmark without much of a fight. It also didn't help the Argentineans that Denmark simply opened better, and got some great broken rares that work perfectly for their matchups. Cleeman has an unstoppable Finkel and Possessed Aven that should crush Michelena's deck, and Christensen has three landwalk capable creatures for the mirror match in addition to Violent Eruption. Between Wild Mongrel, Call of the Herd, Beast Attack, Centaur Chieftain and two copies of Genesis, Laier's deck is insane regardless of the matchup. 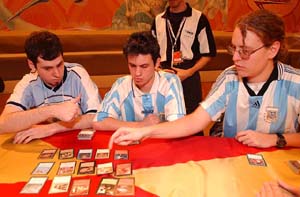 Sideboard: How do you guys think it went?
Denmark: Very good!

Sideboard: Anything specific that you're excited about?
Laier: They were a little surprised when I got the Dreamwinder and the Aether Burst to go green/blue as an answer to their white/blue. They may have thought I was red/green.
Christensen: When (Cleeman) took Skywing Aven over Balshan Collaborator, that was also great. The Collaborator would have just been a 2/2 flier for him. Skywing Aven is very good against (Laier).

Sideboard: Right, I saw that Jonas (Cleeman) wanted the Collaborator, but you guys were telling him not to take it. What was with Venemous Vines second pick in the last pack? I didn't understand that at all.
Cleeman: Basically...(laughs).
Christensen: The thing is, he's basically sure to win. So, his opponent needs some permanent removal to have any chance at all.
Laier: Basically it was a counterdraft for his own deck.
Cleeman: There was nothing in there that was good enough that I would play it, so I was looking for what was best to counterdraft.

Sideboard: You got two late Sudden Strengths, and they didn't seem to respect the card at all. What did you think of that?
Christensen: We had some packs that were ten or eleven (cards) deep, and we got some really good wheels, like Aether Burst and Dreamwinder.

Sideboard: I think your matchups look great. Pete (Christensen) even got the two Whispering Shades for the mirror match.
Christensen: He also passed me Zombie Trailblazer. I don't know why. He took nothing over it. He took Longhorn Firebeast instead. I think my matchup is great, but it was great the last two times and I lost! They gave us the Call too.
Laier: They took Aether Burst over it because he was afraid of me getting two.

Sideboard: So you think all your matchups are good?
Christensen: Well my matchup is the most random.

Sideboard: You do have landwalking.
Christensen: I do, but last match I was on black/green with black/red. I had four great rares, and I drew only two land two games in a row.

Sideboard: Well any deck will lose to that!
Christensen: Yeah, but I haven't won a match yet today! I had one bad matchup and two great matchups.
Cleeman: I won all of mine, so...