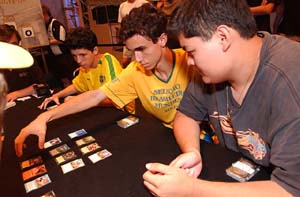 Where should I start?

There are so many storylines for this round. That in and of itself is fascinating. This was supposed to a round without storylines. The finals for the Team Draft had been decided—USA beat Japan and Finland took out France—and although there was still a round to play it was largely meaningless. In fact, the American team was planning on rare drafting and then conceding to the Malaysian team to just be silly.

Team Finland had a similar opportunity this round. Actually, they had two opportunities. Yesterday, during the final round, Tuomo did not offer the draw to the reigning World Champion and eventually knocked him out of contention for the Top 8. Tuomo was concerned with getting as many points possible for the team competition. It put a stunning cap on the Swiss portion of the event and it left dropped jaws throughout the feature match area when a visibly shaken Carlos did not earn a Top 8 berth.

Today, a concession from the Finish team would assure Carlos enough Pro Points that he could lock up an Invitational spot. If his team lost he could be passed over for that spot in favor of Jose Barbero. It would cost the Finns nothing to scoop it up but it would cost friends on the English and Norwegian teams money and Pro Points.

Tuomo Nieminen was looking to crush Carlos's dream for the second straight day. "He is no more deserving of it than the other guy," explained team captain Tomi Walamies. "It is nothing personal against Carlos—he knows that."

If Carlos was looking for revenge he might need some help. Tuomo had dominated the tournament all week with only three match losses in a staggering twenty one games. Over that span he had only lost nine individual games. 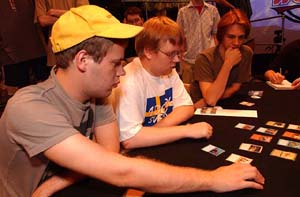 While Carlos's deck ended up being a spicy little number with gobs of removal, Tuomo's deck featured a pair of Stoic Champions and seven solid cyclers. The Finn had a good amount of his own removal plus he had Crown of Awe, which was going straight in the deck. That card was just one example of how the Finns felt the draft was lost by the Brazilian team. "They don't take cards away from us," explained Tomi. "I have an Imagecrafter and a Seaswift—they should not have let me get the Crypt Sliver, for example."

The Finns passed an Ambush Commander for the second time today and they claimed it was not the same situation. Tuomo took a solid card for his deck with his first pick of the pack. Not the same as letting the opponent get a highly useful card—like a disenchant or a tribal component--on the way back around. "Ambush Commander is good but its not like Jareth or anything," concluded Tomi.