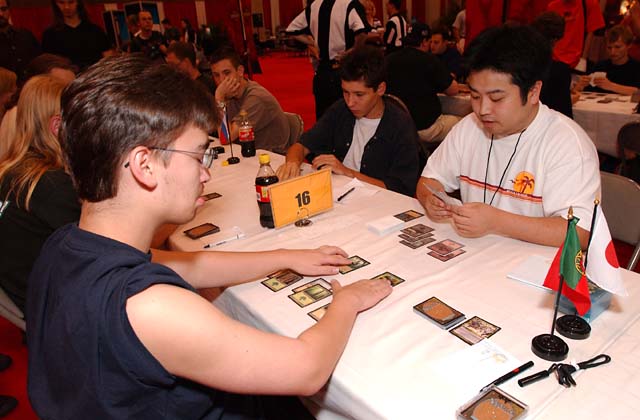 Going into the last round, both of these teams are within range to strike their way into the finals, if either of them are able to muster a 3-0 win for their team. Japan is up on points, and so it is far more likely that they would achieve the final playoffs if they pulled off the perfect match, but so far to this point not a single match had been decided 3-0, and it would take nothing less than the maximum points to keep these teams in the race. Japan won the roll and chose to draft first, and when they opened a Crypt Angel and Faerie Squadron as the first two cards drafted for their team, they appeared to be off to a good start, if not exactly the one that is being touted as the most powerful draft strategy as far as forcing colors goes. Portugal likewise did not seem in following the herd of players following the 'pro' draft strategy, as they put green-white in the A seat with the first card for their team, Thornscape Apprentice, with the 'accepted' blue-white pick, Tower Drake, but put the Smoldering Tar in the C-seat, which is a bit of a reversal of what everyone else thinks should be forced from the start.

Pack mentality was not the word of the day at this draft table, and unfortunately for the Portuguese National Team, neither was solidarity. There is something to be said about functioning in a conventional matter, even if not drafting the conventional archetypes, but Portugal stepped on each others' toes several times throughout the draft portion, and gave the Japanese team several gifts throughout the draft, such as Goro Matsuo's tenth-pick Crosis' Charm, which could have been taken as any of the six picks the Portuguese team took, especially considering the fact that some of those cards did not make it into their decks, while Goro had already declared an interest in splashing blue into his Black-Red deck several picks earlier.

Likewise, when the Portuguese Black-Red player, Luis Sousa, opened his pack, the Japanese team put a lot of pointing effort into the Penumbra Kavu, appearing to fight over which of their members got to play it, which caused Luis to draft it, since he had already expressed an interest in some green mixed in there. However in so doing he passed Goro another bomb, the Phyrexian Gargantua, which did not help their situation terribly as it would have been excellent in Luis' deck and quite dangerous for Dinis Maia to face down.

Draft skills can't necessarily touch pack-opening skills, however, and while the Japanese appeared to out-draft their opponents early, the Portuguese wrecked Japan in Planeshift, with multiple Magma Bursts, Rushing Rivers, and Voices of All. Planeshift was good for the Japanese, just not that good, and they made a bit up when their first Apocalypse pack had a Desolation Giant and Illuminate, but when the dust cleared at the end of the draft, there was no clear winner, with a lot that could go either way.

A chart of the draft, minus the non-relevant later picks that would not be making it into any of the decks, looked like this:

The first match, Goro Matsuo versus Dinis Maia, was going to be a nail-biter; except for the two Voices of All and the lone copies of Fleetfoot Panther and Magma Burst, Dinis should be overwhelmed quickly, but those four cards would make it a swing match. In actuality it came down to the third game and play errors by Matsuo, who despite winning the Japanese National Championships remains a semi-retired player, and Dinis was able to squeak it out in extra turns with a combination of Voice of All and Magma Burst due to how much time Goro gave him to hang on.

The second match, Masahiko Morita versus Helder Coelho, saw Helder pick up the first win for Portugal, putting his multiple Rushing Rivers and his opponents' relatively stressed mana base to good application by taking him down in a relatively swift match, for a blue-white deck. Raka Sanctuary was involved, as could be expected, but there was nothing Masahiko could do... it was only a good matchup so long as he drew his mana well, and it was not perfect.

The final match, Masaya Mori versus Luis Sousa, saw Masaya overpower his opponent fairly easily, as not only was it a good matchup (blue-white splash powerful red cards versus a fairly diluted black-red-green deck) but Masaya's deck was easily the best deck the Japanese drafted. Masaya played well while Luis, who had disrupted his team's draft at several points through the draft portion, was not able to break through the defenses to get an actual race going.

In all, it could have gone either way, but it merely elected to not go in Japan's favor despite a slight but distinct advantage after the draft.