Team Draft Round 3: USA vs. Scotland 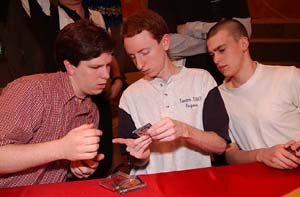 While the big guns—Germany, the Netherlands, Sweden, and Argentina—beat the daylights out of each other at the top of the standings, the all-but-forgotten USA had put together two impressive 3-0 sweeps over Norway and Ireland and was still in contention (at least mathematically) should Germany continue to win.

USA captain Eugene Harvey, heir to the successes of Team CMU in the team format, had worked with Mike Turian, an icon of the format, for the upcoming Pro Tour-Boston, and their strategies have been working perfectly so far, with neither Harvey or his teammates Eric Franz and Andrew Ranks losing a match so far today.

Across the table sat Team Scotland, in the same must-win boat as the USA. In eleventh place after Day 3, Edward Ross, Douglas Penman, and Gary Campbell put up back-to-back wins over Sim Han How's Malaysian squad and Tomi Walamies' Finnish crew to remain in contention.

Scotland was used to drafting second, so they were throw for a loop when the USA won the coin toss and elected to go second themselves.

Penman, in the B seat, took a Springing Tiger first, and Ross took a Balshan Griffin. The Scots prefer the standard strategy of blue/white in seat A, green/blue in seat B, and black/red in seat C, and their early picks synched up with those plans.

USA employs a similar strategy, and it was evident by their picks of Morgue Theft for Ranks, Aether Burst for Harvey, and Shelter for Franz. Campbell wheeled a Werebear and a Twigwalker, setting himself reluctantly in green.

In pack two, Ross was presented with a dilemma: Shower of Coals or Divine Sacrament. He took the Sacrament in order to stay the course, but afterwards admitted it might have been a mistake. With the knowledge that his opponent was white from the Shelter Franz took, the Sacrament may end up as a truly symmetrical card, whereas the Shower is about as one-sided as a card can get. Ranks took Patriarch's Desire, Harvey took Psionic Gift, and Franz got the Shower, looking to go white/red.

The USA took Krosan Archer, Cephalid Broker, and Ember Beast in the next pack, and Penman took an Execute opposite Harvey. After that Penman kept taking black cards, like Innocent Blood and Gravedigger, putting himself firmly in black/green. Campbell, in seat C, was taking red card after red card, including three Mad Dogs.

From watching the Scottish, it was clear that Ross was the guy in charge, going so far as to physically move Penman's arms away from the draft area when he didn't like what was being pointed at. Campbell seemed more than willing to just take what Ross indicated, while Penman would occasionally protest.

The Odyssey pack Franz opened contained a Shadowmage Infiltrator and a Beast Attack, neither of which fit into his red/white deck. Not wanting to take a Flame Burst and give Scotland the hookup, he ate up the Beast Attack and left the door open for dropping white for green later. Ross ended up with the Finkel, a potential black splash in his blue/white deck. The last Odyssey pack of the draft solidified Scotland's decks even more, giving Campbell and Ember Beast, Penman a Wild Mongrel, and Ross an Aven Windreader.

Going into Torment, all that was evident about the Americans' decks was that Franz was red, Harvey was blue, and Ranks was black. They each had a few cards of several other colors, but they'd need to commit quickly. 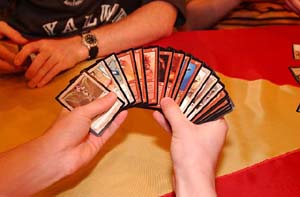 Campbell abandoned green really quickly when Torment came around, taking three Faceless Butchers and two Barbarian Outcasts. On the other side, Harvey committed to green with a Possessed Centaur, which would be even better if he could manage a black splash. Ross picked up a Possessed Nomad, giving him even more incentive to splash black.

Franz never got any more green cards; he had to stick to red/white. Harvey was clearly looking blue/green, and Franz was potentially going to be black/white after taking a Tainted Field to go with his Pilgrim of Justice and Kirtar's Desire.

Torment clearly favored the Scots; in addition to Campbell's three Butchers, Penman got a Narcissism, and Ross the Nomad and Ambassador Laquatus.

Penman opened the first Judgment pack and selected a Treacherous Vampire for his B/G deck. Ross took a Shieldmage Advocate, shipping the Worldgorger Dragon to the USA. Franz didn't take the Dragon, which went to Campbell on the wheel. That card could spell trouble for Ranks should it hit the table.

Ranks grabbed two Phantom Tigers early, plus and Ember Shot as a way to kill Butchers, so it looked like his new plan was to go black/green splash red. He ended up with a Treacherous Vampire to fill out his deck from a pack that contained a Spelljack for Harvey and a Swelter for Franz. 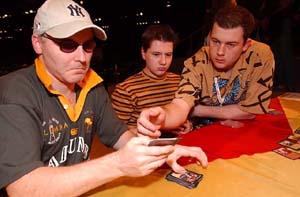 Franz's deck got significantly better with Commander Eesha and a Phantom Flock right at the end. Harvey was now splashing white into this U/G deck, but Penman counterdrafted an Anurid Brushhopper from the last pack.

Overall, Scotland got the better end of the deal. Campbell has a serious edge over Ranks thanks to his three Mad Dogs and two Barbarian Outcasts backed up by three Faceless Butchers. Those cards can make for some blistering starts, with Worldgorger Dragon as the icing on the cake.

Harvey's deck is a mish-mash with bad mana; his only decent ground creatures are Possessed Centaur and Battlefield Scrounger. He needs to Spelljack a few bombs.

Franz may have the edge in his match thanks to Shower of Coals and Swelter. Ross refused to ever take Pay No Heed, a good card against Franz's removal.