After a stellar performance in the late rounds of play yesterday, the Japanese National Team was able to fend off strong advances from both the Hong Kong and US National Teams, as well as leapfrog over the Norwegian National Team to take the top spot in this National Team finals. 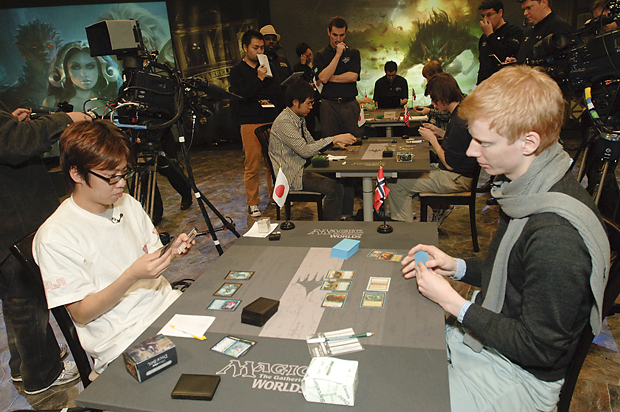 Japan's Fujimoto Tomoya and Norway's Andreas Nordahl go at it in an explosive and potentially Emrakul, the Aeons Torn-filled Legacy match

On my left, Fujimoto Tomoya from Japan sat shuffling his Show and Tell deck while Norway's Andreas Nordahl piled his Hate Bears deck on his half of the table. Both players had managed perfect records during the Team rounds, Nordahl joking that he was upset that he managed to lose a game. This was set to be a classic Legacy matchup of powerful combo deck against metagamed aggro-control.

Tomoya, by virtue of Japan's first-place finish, chose to play first. Neither player mulliganed, and the match got underway. Tomoya's first-turn Volcanic Island was immediately targeted by a Wasteland from Nordahl, but not before Tomoya got a chance to use it to Brainstorm. Tomoya got to fetch a basic Island from his deck on the following turn, helping him to Ponder his way into a City of Traitors. He held both Show and Tell and Emrakul, the Aeons Torn, the Aeons torn in his hand, so next turn would be a big one for him. 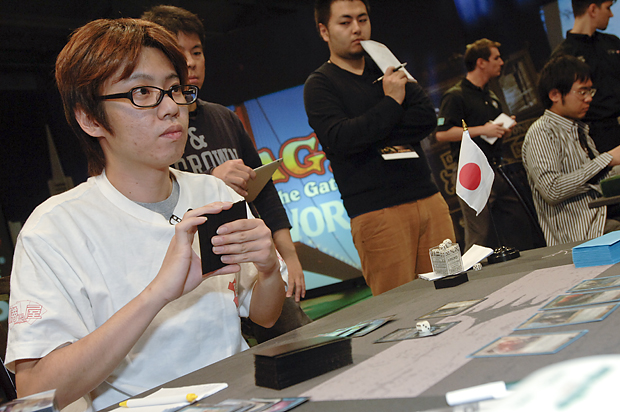 Tomoya's Show and Tell deck is all set to deliver a 15/15 to the table.

Nordahl knew about the explosiveness Tomoya's deck was capable of. Still, he had no third turn play other than a Noble Hierarch, allowing his Dryad Arbor to attack for two. On his turn, Tomoya went for it, using City of Traitors to fuel a Show and Tell. He revealed a Progenitus to match Nordahl's Knight of the Reliquary. One of these things is a little bigger than the other. Nordahl stoically untapped and added a Mother of Runes to his board before letting Mr. "protection from everything" do his stuff. One swing put Nordahl at 9. Tomoya thought for a moment about his play before adding a Jace, the Mind Sculptor to his team. He used it to return the Knight of the Reliquary, which promptly got Nordahl to scoop up his cards.

Nordahl had admitted to me before the match that he was sure this was going to be a quick match, and so far, he seemed correct.

After some discussion about keeping hands, Makihito Mihara gave Tomoya the thumbs up to keep his hand. Nordah kept his as well and started off with a Noble Hierarch. Tomoya set about doing what his deck does, digging for pieces with a Ponder. Nordahl began a long thought process before deciding to simply send his Hierarch to attack and pass the turn. Tomoya played a second Island and passed right back. A second fetchland allowed Nordahl to grab a Dryad Arbor at the end of Tomoya's turn, which turned into a 3/3 attacker thanks to a Qasali Pridemage before he attacked.

It was the critical turn-three, and Tomoya was still searching for his pieces. Brainstorm dug a touch deeper, but still no Show and Tell. Instead, Tomoya would have to be content locking down Nordahl's Savannah with a Blood Moon. Nordahl got to untap, sending his Pridemage over to knock Tomoya to 11 before adding a 4/4 Knight of the Reliquary to his team. Tomoya could see the damage he would take if the Knight resolved, choosing instead to Force of Will it.

Tomoya made the best of his borrowed time, casting an Intuition for three copies of Emrakul, the Aeons Torn. The ones that went to the graveyard triggered their ability, returning his whole graveyard to his deck, as well as giving him an essential part of his combo. Stoneforge Mystic came down for Nordahl, fetching himself an Umezawa's Jitte, which he immediately cast and equipped to his Pridemage, attacking Tomoya down to 6. 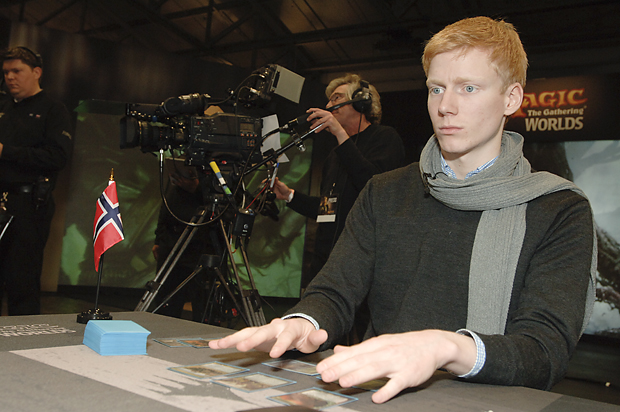 Nordahl battles his way through the stumbling Show and Tell deck, preparing for the critical turn of annihilator 6

This was the do or die turn, as Tomoya was facing down lethal damage from Nordahl on the next attack. And with that in mind, he calmly tapped his mana for a Sneak Attack, putting Emrakul, the Aeons Torn into play and attacking. Nordahl had enough permanents in play to keep his Umezawa's Jitte and the Qasali Pridemage holding it. With Tomoya at 6, that was good enough to exactly kill him.

Nordahl's deck showed what it was built to do in the last game, which is to capitalize on stumbles opponents make, while trying to induce them if possible with the abilities of his creatures.

With one game already decided, and the Modern match already nearing completion, the Legacy match was put on hold to see if a game three would be needed to decide the champions. Every so often, the other members of the Norwegian team would glance in the general direction of Nordahl to receive either a nod or a shake of the head. Tomoya, meanwhile had crossed over to perch behind Mihara, whom he had been taking most of his cues and advice from in his match. Content to let the more experienced Mihara make the decisions, Tomoya appeared to be there more for moral support and solidarity.

After a very long and tense match involving both players setting up a Punishing Fire engine, a game best described by Tim Willoughby as a "game of fiery tennis", Mihara eventually pulled ahead, giving the title to Japan, and negating the final game of Legacy play.