While Kristoffer Jonassen of Team Norway waited for his opponent to arrive at the table, he admitted that they felt Japan was heavily favored in this match. Notwithstanding the fact that all three members of the Japanese team get to choose if they'd like to play first because they finished higher in the Team Standings.

"How did you do in Standard?" Jonassen asked Ryuichiro Ishida, as they shuffled their decks. 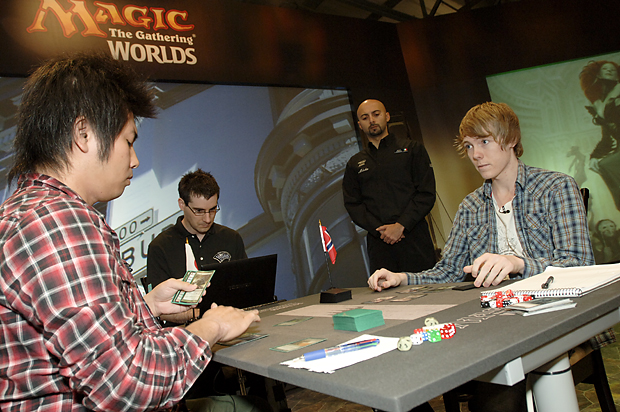 Both players mulliganed to six, Jonassen leaning out of his chair to share the decision with Team Norway Captain Sveinung Bjørnerud. Ishida played a Rampant Growth, while Jonassen summoned an Avacyn's Pilgrim. The Pilgrim attacked for 1, but Jonassen had no further play on turn-two. Ishida summoned a Viridian Emissary and played a Ghost Quarter. Jonassen summoned a turn-three Hero of Bladehold.

Ishida considered his turn, but played nothing. Before Jonassen could attack, however, he revealed the Beast Within the Hero of Bladehold. Jonassen played a Blade Splicer after combat.

Playing a fifth land, Ishida cast Garruk Relentless, who shot down the Pilgrim, becoming Garruk, the Veil-Cursed in the process. Jonassen Gut Shot the Emissary, sent his Beast to take out Garruk, and Team Splicer to drop Ishida to 15. Jonassen followed that up with Elspeth Tirel, making even more creatures. Ishida tapped out on his turn for a Primeval Titan, searching out a second Inkmoth Nexus and a Kessig Wolf Run.

Oblivion Ring exiled the Titan, and Jonassen attacked Ishida down to just 5 life. Ishida untapped slowly, and heaved a sigh of relief after drawing his card. He destroyed Elspeth with a Beast Within before casting Day of Judgment.

"Awww," Jonassen smiled, "do you just draw that?"

"Top!" Ishida responded with a grin, pointing to his library. 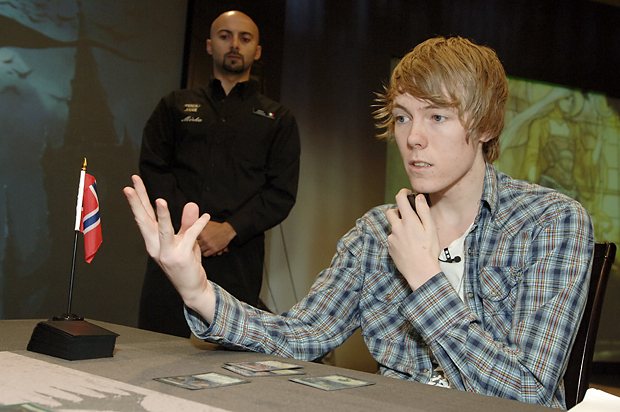 Jonassen's dreams: shattered by a Day of Judgment.

Ishida attacked with a Nexus, and a turn later, summoned another Primeval Titan. Jonassen summoned a Blade Splicer, causing Ishida some concern. Maybe he could attack Jonassen for a bunch, but maybe Jonassen had a trick up his sleeve, and could attack back for lethal. Ishida carefully attacked with the Titan and just one Nexus before recruiting Gideon Jura. Jonassen drew his card, and with no answer to the Planeswalker, reached for his sideboard.

"Isn't your deck already pre-sideboarded enough against me?" Jonassen asked jokingly, as they recompiled their decks.

Sideboarding for Jonassen went as follows:

In: 2 Thrun, the Last Troll, 2 Sword of Feast and Famine

Jonassen again consulted with his teammate on his opening hands, mulliganing three times before settling on four cards he only barely liked the look of. Somehow, he still managed to play lands all the way up to a turn-four Hero of Bladehold, watching impassively as Ishida Rampant Growthed his way up to a Gideon Jura. Jonassen sent his team at Gideon Jura before casting a Sword of Feast and Famine. Ishida cleared the way with a Day of Judgment and attacked with Gideon Jura. Two turns later, he cast Elesh Norn, Grand Cenobite, causing Jonassen to burst out laughing as he gathered up his cards. 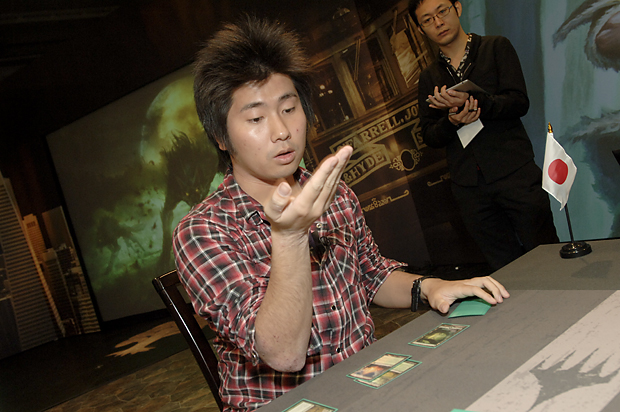 Ishida makes quick work of his opponent in the Team Final.

The players happily discussed each other's sideboarding decisions after the match before heading over to offer assistance to their teammates in the Modern match.