Team Finals 1: Sure as the Sunrise

The stress levels were high for the Team 1 half of the Team Championships, but not for reasons one might normally imagine for a game worth thousands of dollars. It seemed the Austrian team had scheduled their flight home for Sunday evening instead of waiting for the more prudent Monday, apparently not expecting any of the four members of the team to be playing on Sunday. That meant the group was at risk of missing their flight and having to re-schedule, a potentially costly move. The Swiss team, on the other hand, was simply under the normal amount of pressure that comes with playing high-profile Magic, and it was going to be interesting to see if that played a role in how their match played out. 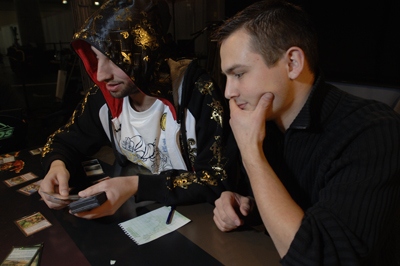 Raphael Gennari and Christoph Huber of Switzerland. After the first few turns the boards stood as such: the Austrian players each had three lands with Helmut representing blue-red and Reitback on black-white. David also had the only creature for his team with Burrenton Forge-Tender, which had whittled the Swiss players down to 29. Across the table Gennari and Huber had each managed three land drops as well with a Blind-Spot Giant for Gennari and Woodland Changeling for Huber. The 2/2 had managed to get an attack in putting the Austrians at 28.

When Reitbauer missed a land drop the Swiss opted to Nameless Inversion his Forge-Tender, then play Hillcomber Giant to get an attack in with Blind-Spot Giant. Reitbauer’s Eyeblight’s Ending put a stop to those plans, but the Woodland Changeling came in anyway. Helmut was happy to tap four mana and flash in a Sentinels of Glen Elendra ,which quickly blocked the 2/2. Huber didn’t have to think long before he played Briarhorn. The two Austrians were not happy.

Helmut: “Oh no, not Briarhorn!”

Summersburger couldn’t be too disappointed, however, as he untapped and hard cast a Mulldrifter. His teammate had to main phase a Footbottom Feast to try to draw a fourth land, which he did. They passed to the Swiss, who continued on the offensive with Gennari playing an Avian Changeling that enabled his Blind-Spot Giant to attack while Huber’s Briarhorn and Woodland Changeling came in. Mulldrifter stepped up to eliminate the 2/2, but the Swiss had two tricks: Huber made Fistful of Force to save his Shapeshifter (though he lost the clash), and Raphael played Surge of Thoughtweft to draw a card.

The game was quickly turning into a blowout. Switzerland was leading 29–11 with a commanding board position featuring Woodland Changeling, Dreamspoiler Witches, Briarhorn, Blind-Spot Giant, Flamekin Bladewhirl, and Avian Changeling. Meanwhile across the table the Austrians had only a Silvergill Douser and Streambed Aquitects, with a Plover Knights RFGed by Oblivion Ring.

In an attempt to get back into things Reitbauer played an Oblivion Ring of his own, targeting the Ring his opponents had played. That returned his Plover Knights and gave him a formidable blocker and all of a sudden, with Helmut’s Silvergill Douser made more potent by a Deeptread Merrow, it looked like they might be able to climb their way back into things. 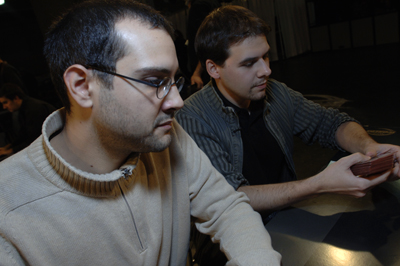 David Reitbauer and Helmut Summersberger of Austria. Of course, the Swiss certainly weren’t going to do any favors for them. Gennari drew for his turn and quickly showed a Consuming Bonfire targeting the freshly returned Plover Knights. That allowed his team’s creatures to get in for 2, putting the Austrians on a precarious 9 life. When the Swiss players got their next turn they made a Sunrise Sovereign. David and Helmut had little to say on seeing the rare, offering up a simple “Yep” in unison.

The Swiss quickly turned their entire team sideways and the Austrians tried to come up with a game plan that would allow them to survive and get back into things. Aquitects hopped in front of Woodland Changeling, Kinsbaile Balloonist in front of Avian Changeling, a Deeptread Merrow chumped Briarhorn, and Douser blocked Soulbright Flamekin. A surprise Whirlpool Whelm from Summersberger bouncing the Sovereign took out a number of the Swiss team’s creatures but left enough to swing for lethal the following turn. After looking to their decks for help, both Austrian players quickly extended their hands in defeat.

After the match the teams congenially offered each other their decks to review. “No removal!” Helmut complained, motioning to his. The players laughed together about Gennari and Huber’s first picks pack five: Profane Command and Thundercloud Shaman. Needing to catch their flight, the Austrians bowed to take their leave. 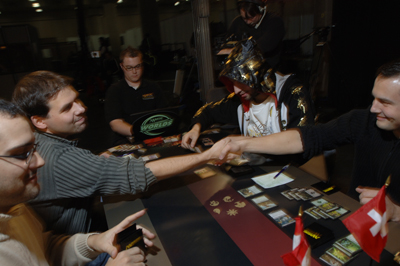 Switzerland defeats Austria at the Team 1 table, so the results of the match now hinge on what happens at the other table.