Team Finals 2: Evasion for the Title

After three days with the best Magic players in the world competing for the World Championship titles in New York City, two European national teams made their way to the top of the competition, winning the chance to put their name and country in the Magic history. 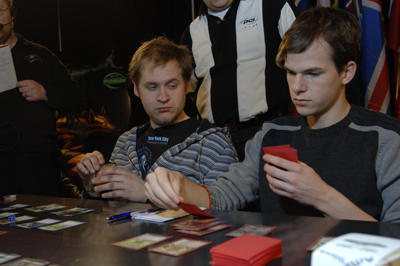 Thomas Preyer and Stefan Stradner are racing both the Swiss and the clock. If you have not been following the team competition I will briefly explain how the finals worked. The Swiss and Austrian national teams were divided in two Two-Headed Giant teams to play a final 2HG draft for the glory of their countries. Each 2HG team played against a team from the other country and in case of a split both winning teams would play against the other one that won—which would be a problem, as the Austrian team had a flight scheduled for today and would not be able to catch it. Did they have cause to worry? Keep reading to know!

On this side of the Team Finals: Nico Bohny and Manuel Bucher, both from Switzerland, faced Thomas Preyer and Stefan Stradner from Austria. The Swiss players are not new to the stage, having both Grand Prix Top 8 finishes, and Thomas Preyer was the finalist of Pro Tour–London some years ago, so this match could never be easy for any of the players involved.

The Swiss players won the coin flip and they chose to play first. However the Austrian team played the first spells, but not before than complaining about how long it took to the Swiss players to decide what to do on the first turn, as they had a tight schedule and every second was important. They played Elvish Handservant and Wanderer’s Twig, hoping for some changeling action from the other side of the table. During the next two turns there was no interaction between the different players’ cards, as the Swiss team played Fertile Ground, Stonybrook Angler, Streambed Aquitects, and Lys Alana Huntmaster, while on the other side of the table a second Elvish Handservant and a Mudbutton Torchrunner were the only cards played, leaving some blue mana open.

An Ajani Goldmane ran into a Broken Ambitions,and it was time to attack with Stonybrook Angler, as Streambed Aquitects could cover his back. Showing no fear of the double Elvish Handservant, the Swiss black-green deck played not one but two changelings that turn, Skeletal Changeling and Ghostly Changeling, giving two free +1/+1 counters to the “little” Elves and receiving two free Elves tokens in return. The Austrians followed up with Hornet Harasser.

If the first turns didn’t have much action, this was about to change, as the Swiss declared their intention to move into the attack step, but a Pestermite came into their way to tap the scary Ghostly Changeling, as having Merfolk status allows him to get Islandwalk with the help of his best friend Streambed Aquitects. However, Stonybrook Angler untapped it, Streambed Aquitects gave him evasion, and the only reason why the changeling didn’t pump up further was because there was a Mulldrifter ready to join the Swiss squad. To finish the turn they played a Judge of Currents. Deciding to work on their defensive against the Swiss team, the Austrian team played a second Mudbutton Torchrunner and Silvergill Douser. A main-phase Eyeblight’s Ending tried to put an end on the Silvergill Douser’s life, but Whirlpool Whelm saved the creature. A second Judge of Currents came into play and, keeping an offensive strategy, the Swiss team attacked with Ghostly Changeling, adding again islandwalk to the creature, dealing 5 damage, while getting 2 life this time.

At this point at the other table of the Team Finals stage, the other Swiss team won its game, and it was possible to see that the Austrian players at this table realized that even a win would cost them some money in order to play a final game for the title, as the four players would need to rebook their flight.

As the owner of the Ghostly Changeling was tapped out, it seemed to be a good chance to kill it with Lash Out, which was followed by the THIRD Mudbutton Torchrunner, Leaf Gilder, and the return of Silvergill Douser. Surprising their opponents, the Swiss player played Lammastide Weave, targeting the black-red opponent and naming Shriekmaw, but missing and taking away a Mountain from the top of his opponent’s library. Veteran of the Depths joined the Merfolk on the table and, not wanting to miss an attack, Judge of Currents got Islandwalk and swung with Mulldrifter, leaving the Austrian team with 14 life points. On the Austrian side of the table Amoeboid Changeling came to fight the Islandwalk enabler and Boggart Loggers got extra value, as the Amoeboid Changeling can transform any creature into a Treefolk, allowing the Loggers to kill it. At the end of the turn, for the second time in the Finals, the Swiss team played Lammastide Weave naming Shriekmaw, but once again the cantrip spell just took away a land from the top of the opposing library.

Two Judge of Currents can be scary, but there was one piece missing in the puzzle and the Swiss players like to complete what they start, so when they played a Silvergill Adept on the next turn, they revealed Summon the School.

As they were taking some time considering their options, the Austrians said, “You know we have to catch our flight, please play faster.”

Their opponents played Weed Strangle on the Silvergill Douser, and while their life was already much higher than the starting life, they won the clash, getting 1 extra life point. Veteran of the Depths got islandwalk and dealt 4 damage, and after playing Jagged-Scar Archers, the Swiss players ended their turn. For the first time the Austrians put a creature in the Red Zone, dealing 2 damage with their Boggart Loggers but, thanks to some life gain, only putting the Swiss players at 38 life. 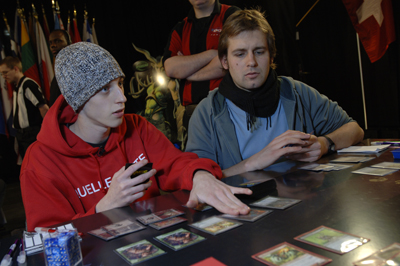 Manuel Bucher and Nico Bohny fight to bring things home for their team. After dealing 2 damage, the Austrians thought that the creature had lived enough and with some help of Amoeboid Changeling the assassin of the Treefolk was ready to kill the so-annoying Streambed Aquitects. A fully powered Mournwhelk from the Swiss side got countered and the Archer killed the Pestermite, allowing Mulldrifter to deal more damage and leaving the Austrian national team at a shy 8 life. Time to play Summon the School? Guess not, Fallowsage was the next Merfolk spell to hit the table, creating a card-drawing engine with the help of Stonybrook Angler. Trying to recover some board position, the Austrians played Bog-Strider Ash and, as they were aware of the Swiss drawing engine, the first Goblin spell after that was Fodder Launch, sacrificing Mudbutton Torchrunner to kill Mulldrifter and Stonybrook Angler. However the Swiss still used their creative engine once, tapping their creature before it died.

When the players from Switzerland were untapping their lands, the table judge noticed that the four players missed the 5 damage from Fodder Launch, as they were too focused on the creatures to notice the life change. With the life totals corrected, Ponder left two known cards on the top of the library and a second Silvergill Adept allowed the Swiss player to draw Merrow Reejerey and play it in the same turn. The Austrians conceded after drawing another card, as they were too low on life points to fight the full Swiss Merfolk army. The other Austrian team joined their teammates and in the true spirit of sportsmanship they shook their opponents’ hands.