is it - the best player on the best U.S. National Team in years against maybe the best player in the game right now. Masashi Oiso missed a Pro Tour and still managed to finish the season mere points away from Player of the Year winner Kenji Tsumura. 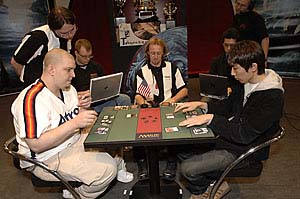 Reeves and Oiso each liked their draft decks.

During the draft, Oiso managed to put together a solid Dimir deck while Reeves packed in a four-color green deck, continuing a trend of the weekend. With two Last Gasp, two Farseek and a lot of beef, Reeves looked to have a strong base. His double Siege Wurm, Grave-Shell Scarab, and Ursapine all met with Neil's penchant for "boom boom."

Both players thought their decks turned out well. Reeves admitted he was worried about Oiso's counterspells quashing a fattie or two, and then following that up with an aerial assault.

Neil Reeves was pretty chipper to start the match, and began humming God Bless American while shuffling up for Game 1. Oiso won the die roll and both players chose to keep their openers as the big lights came up on the penultimate match of the 2005 season.

Reeves had a turn-three Trophy Hunter squaring off against Terraformer and Mortipede from Oiso. Snapping Drake made the number of creatures on the board even, though the overall quality of them slanted heavily in Reeves's favor. Strands of Night on the Mortipede is rarely a bad play, though Oiso lacked the green mana necessary to make him a house.

Reeves discarded Grave-Shell Scarab and a Forest to the Strands and then shipped his men into the red zone, smashing for five. Oiso got busy on his turn as well, hitting Reeves for six and casting Tidewater Minion. Reeves got in there with Snapping Drake a turn later, adding the hefty Siege Wurm to the board with the life totals showing Oiso at 12 and Reeves at 14. 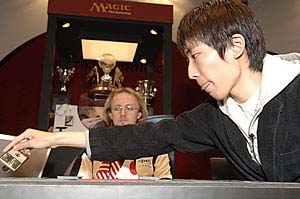 Vedalken Dismisser put Snapping Drake back on top of Reeves's library and then an attack by Siege Wurm plus Ribbons of Night removed the Wurm, Mortipede, and the Dismisser from the play area.

Oiso merely played Lurking Informant during his next turn, allowing him to keep mana open to Convolute the Drake on Reeves's turn, making the board Trophy Hunter for Neil against Masashi's Informant, Minion, and Terraformer. Ursapine resolved for Reeves a turn later, and one had to wonder how much Oiso would have liked to have that Convolute back.

Stinkweed Imp was Oiso's next play, but Reeves had plenty of immediate answers to the pimp in hand (Disembowel, Last Gasp), he just needed to figure out which ones he wanted to use. He chose instead to pass the turn back to Oiso, and then DisembowelLurking Informant when Masashi tapped out.

Reeves used Trophy Hunter on Stinky at the end of Oiso's turn, but with the activations on the stack, Oiso went for the blowout by hitting both the Hunter and Ursapine with Last Gasp. Neil was copasetic, merely dredging back his Scarab and tossing it on the board again. It's always the last fatty that gets ya, even if you are Masashi Oiso.

Oiso's situation grew desperate when Reeves added Siege Wurm to the board, giving him nine power of boom booms, including one that just won't quit. Masashi added another Informant to his board, but Netherborn Phalanx dropped him to just 3 life, and he was scooping a turn later.

"Man, double Last Gasp that turn was a blow out," said Reeves. "Did you see that? Thankfully my hand was still pretty hot when he did it, but Gee-zus."

Reeves again had the first spell in Game 2, casting Transluminant on turn two and Fists of Ironwood (with special Jeroen Remie tokens) on turn three. Oiso still had cast no spells by the time Reeves cast double Farseek on turn 4, but had Neil saying, "Booo, that's not the one I wanted you to play," when he cast Belltower Sphinx on turn five. 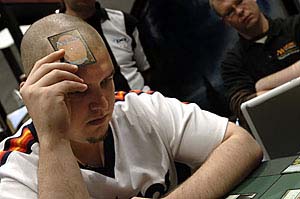 Despite taking Game 1, Reeves's day ended early when the other two U.S. players lost their matches.

With the weenie brigade now stymied, Reeves made two more men, pitching Snapping Drake and Golgari Brownscale onto the field of battle, giving him a five-to-one creature advantage until Oiso cast Mortipede.

A second Fists of Ironwood on Transluminant gave Reeves even more tokens, but he was flooding on land as well and simply couldn't draw any of his good spells. Finally he decided to start swinging, pitching seven men into the fray, losing Snapping Drake and the Brownstone in return for killing the Mortipede. Oiso followed this with Tattered Drake, and then Tidewater Minion a turn later, searching for a critical mass of blockers.

About this time, Reeves noticed Sonne and Shimura had left the play area. "Are they already done? I guessed we got crushed then, eh?" The judge for that match merely nodded in the affirmative.

Oiso cast Necroplasm on his turn, shipping two-thirds of Reeves's now undersized army to the bin. Reeves finally stopped drawing lands and cast Siege Wurm and Trophy Hunter back to back, but not before setting Oiso up with an attack with his squad that let Reeves ... concede, as Takuma Morifuji won his match against Antonino De Rosa, giving Japan the match.