Team Finals: The Brawl to Settle it All

and day. North and South. The dispositions of these two players could not be more different. American champion Antonino De Rosa came into the draft knowing the road Takuma Morofuji would walk down. Without exception, every Japanese draft put Morofuji into the omnipresent Boros aggro archetype. 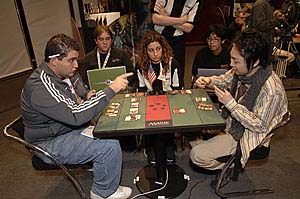 The two national champions sat with the team championship in the balance.

With that in mind, De Rosa came to the table anticipating taking higher-toughness creatures. But the red cards just didn't come, and the Japanese monopolized pack after pack of solid picks. The consensus among the observers strongly favored Morofuji. Antonino was up against the wall. He didn't like his chances, but he knew his skill and Morofuji's inexperience could add up to bring home the bacon.

Morofuji won the coin flip and chose to play first. Antonino liked his hand of Sparkmage Apprentice, Goblin Spelunker, Viashino Fangtail, Elvish Skysweeper, and a forest, plains, and mountain. However, Antonino kept the Skysweeper home on the first turn, anticipating Morofuji's Fangtail squad. He wanted to make sure that when he played the Elf, it would find its target.

Antonino had the perfect curve and was able to put efficient men on the table before Morofuji's Fangtail brigade could make it to the table. Galvanic Arc on Morifuji's Sell-Sword Brute kept Antonino's board clear, and Antonino's deck offered up a stream of attackers. Morofuji kept drawing land after land. Antonino sent forth the vigilant Guardian of Vitu-Ghazi, and there was nothing Morofuji could to stop the American's press.

While waiting for a camera to focus on the game, Takuma and Antonino tried to get to know each other. Morofuji confessed he didn't know a lot about the U.S., but he enjoyed American films. The two rocked in their seat, eager to start the next game. De Rosa kept jumping up to peek at the other tables. After 10 tedious minutes, play resumed as the broadcast spotlight came down on the national champions. 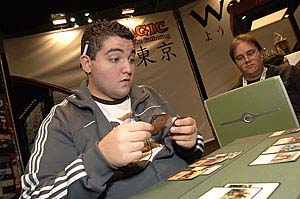 It's no surprise, Antonino - Morofuji can play.

Antonino's hand had a Plains, Selesnya Sanctuary, Boros Garrison, Sandsower, and two Guardians of Vitu-Ghazi. That draw was way too slow, so he mulliganed. Antonino's new hand was Forest, Mountain, Watchwolf, Conclave Equenaut, and Goblin Spelunkers. If he drew a Plains, he'd be in business. Morofuji was going first with Firemane Angel, Viashino Fangtail, Skyknight Legionnaire, Sell-Sword Brute, Veteran Armorer, Plains, and Mountain.

Antonino failed to find a Plains in his first two draws, keeping him from making an early Watchwolf. He prodded his deck, but couldn't find a land on his third turn, settling for an Elvish Skysweeper. Morofuji missed his third turn land drop, so he settled for making a Veteran Armorer. 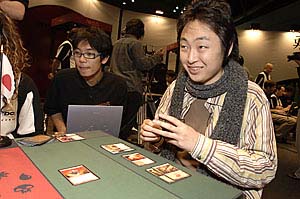 Smile, Takuma, you're on a roll.

Back at square one, Antonino chose to play first. He kept a hand with Divebomber Griffin, Sparkmage Apprentice, and five lands. Morofuji kept as well. For the third time in a row, Morofuji made a second-turn Sell-Sword Brute. Antonino followed with a Courier Hawk, but it looked poor in comparison to Goblin Spelunker. De Rosa matched that with a topdecked Viashino Fangtail. De Rosa threw his Fangtail in front of the Brute, which allowed a Sparkmage Apprentice to finish it off.

Antonino wasn't too happy, drawing a Veteran Armorer off the top. But he was sitting on Divebomber Griffin. The Griffin came out, and Morofuji had Faith's Fetters to neutralize the Divebomber Griffin and swing the race in his favor. Antonino then topdecked a Sandsower. Back and forth the armies went. Morofuji found another Fangtail, and was in the lead 13-8 at the beginning of his turn.

Morofuji beamed with confidence. The results of this turn would determine the match. He declared his attack step, and Antonino tapped his Courier Hawk, Veteran Armorer, and Fettered Griffin to tap down the Spelunkers, leaving a Sparkmage Apprentice and Sandsower untapped. 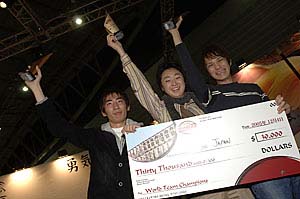 However, the subtlety was soon irrelevant. Antonino had a turn to find an answer, but it wasn't there on the top of his deck. Antonino offered the hand shake and the championship.

Morofuji's win clinched the match for Japan, its first Team World Championship. After a quick photo, he dashed off to call his fiancée and tell her the good news.