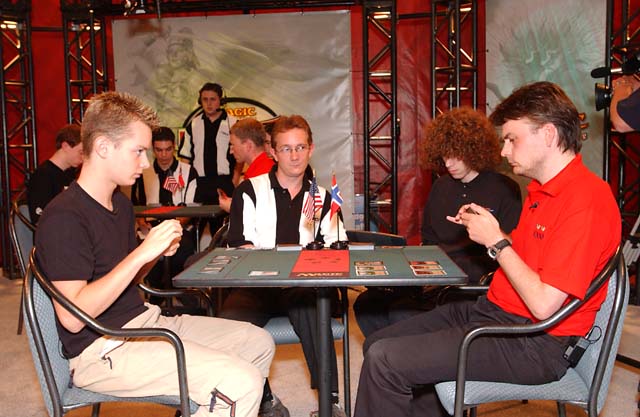 Norway's Øyvind Ødegaard was excited to be in the team finals, but his weathered face didn't show it. He slouched in his chair and passed the time of day with his opponent, the fresh-faced Brian Hegstad of the United States. They were playing a best-of-three with their Day 1 decks, Ødegaard with Fires and Hegstad with Saproling Burt. The matchup was in the American's favor, but not by too much.

Ødegaard's opening hand was a little slow, but had two Birds of Paradise to make a try at a big third turn. Hegstad played Accumulated Knowledge, and had three islands untapped against Ødegaard's five mana. He tapped out for Spiritmonger. Hegstad played a second Knowledge, but didn't find the answer he was looking for. He did his best to be nonchalant about its resolution.

Hegstad untapped and played Yavimaya Coast, passing it back to Ødegaard. Ødegaard couldn't help himself. He had to make a second Spiritmonger. Hegstad leaned back in his chair, letting out his breath slowly. "This is going to take some thought," he said.

He eventually chose to play Fact or Fiction. It turned over two islands, Accumulated Knowledge, Thwart and Foil. He ended up getting Thwart and two islands, and then pitched island and Thwart to the Foil in his hand. Ødegaard passed it back. Hegstad made an Opposition and ended his turn.

The Spiritmonger smashed again. Ødegaard refused to smile, even as he summoned the untargetable Blastoderm.

Ødegaard entered his attack phase. Hegstad's Saproling tapped the Spiritmonger, and he made a second to block the incoming Blastoderm. Before dying, it tapped a land, and Ødegaard seized the opportunity to turn Flametongue Kavu and Shivan Wurm into 1/1's.

Hegstad untapped and was finally able to play Spontaneous Generation, but only for three. He tapped no permanents during his opponent's upkeep. Ødegaard aimed a Ghitu Fire for five at his head. While Hegstad thought Ødegaard put on a smirk. He picked up his sunglasses from the ground beside him, saying "The future's so bright, I gotta wear shades." Hegstad rolled his eyes at the retro reference.

Hegstad took the pain, falling to one. He locked Ødegaard's creatures and chumped the Blastoderm. Ødegaard passed the turn with one card remaining in hand. Hegstad sent one of his Saprolings into the Red Zone, and Ødegaard sighed, realizing what this signaled. He took off his sunglasses, saying "It's not so bright anymore." Hegstad had to laugh. 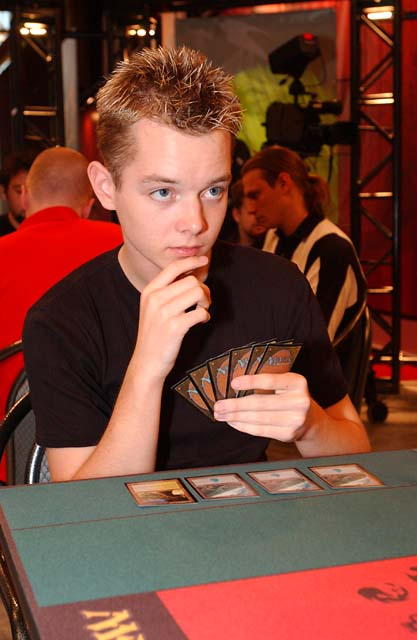 Sure enough, the Static Orb hit the table. Ødegaard untapped Spiritmonger and Blastoderm, but new it was no use. Hegstad tapped the Spiritmonger, then chumped with his last token and tapped his Orb. He also made a replacement. The Blastoderm faded away, and Hegstad tapped both of Ødegaard's Birds. Ødegaard, in turn, made two more tokens. It hardly mattered. Hegstad had three cards to his one, and the ability to untap his Icy Manipulators.

Even with the game so firmly locked, Hegstad's hands were shaking. However, he wasn't intimidated by Ødegaard's offhand manner. His deliberate play speed kept up for two turns, by which time it was clear even to his opponent that there was no way out.

Hegstad mulliganed again, commenting on his bad luck in high-profile matches. In the U.S. National finals he mulliganed in games one and two, and he couldn't believe he was keeping the trend alive. Fortunately, his second hand was satisfactory.

Ødegaard led with Llanowar Elves and followed up with a turn-two Fires of Yavimaya. On his third turn he tried a Yavimaya Barbarian, which Hegstad called "Sneaky," and Counterspelled.

Hegstad played his third island and ended his turn. Ødegaard neglected to Port at end of turn, deciding it was irrelevant. His hand was short on gas, however, and he had to content himself to an unkicked Thornscape Battlemage, leaving up mana for his Port, irrelevant or not.

The Battlemage resolved and Ødegaard slapped on his shades to drive it into the Red Zone, complete with race car noises. Hegstad's disaffected front shattered with laughter at the absurdity of it all. Ødegaard tried to follow up with Saproling Burst on the following turn, but it was Counterspelled.

Hegstad made a two-mana Gush into Opposition and passed the turn. Ødegaard brought out a Birds of Paradise, then red-kicked a Thornscape Battlemage at Hegstad's head. He swung with his monsters, and Hegstad fell to nine. "You need a forest, perhaps?" asked Ødegaard, "Or a Coast?"

Hegstad knocked his deck. He tapped two mana, and Gushed. He moved the cards off the top of his deck and brought them up to eye level before looking at them. He packed them into his hand, then laid the whole mess on the table. It was nine islands and an Opposition. Ødegaard smiled, saying "Is this a concession, or did you just want to show off your lovely islands?" Hegstad played it to the bitter end, playing out island and Opposition, discarding another island. He died to an incoming Shivan Wurm.

Picking up his opening hand for game three, Hegstad couldn't help himself, shouting "Sweet Jesus! I'm keeping my draw!" Ødegaard, however, was far from overjoyed. He stared at a two-land hand with no Elves or Birds for a full minute before deciding to keep.

Hegstad opened with Sleight of Hand, and smiled when Ødegaard played only a forest on his first turn. Ødegaard added a mountain on his next turn, his mood darkening. His third-turn Fires of Yavimaya resolved. Hegstad tapped four, earning an "Oh, dear" from Ødegaard, but it wasn't Spontaneous Generation. It was Jungle Barrier.

Ødegaard tried to be cagey, busting out a kicked Thornscape Battlemage and targeting the wall, but Hegstad just let it waltz on by. He drew and tapped three for Static Orb. With his offense shut down, Ødegaard untapped two lands and played a third, giving it back to Hegstad. 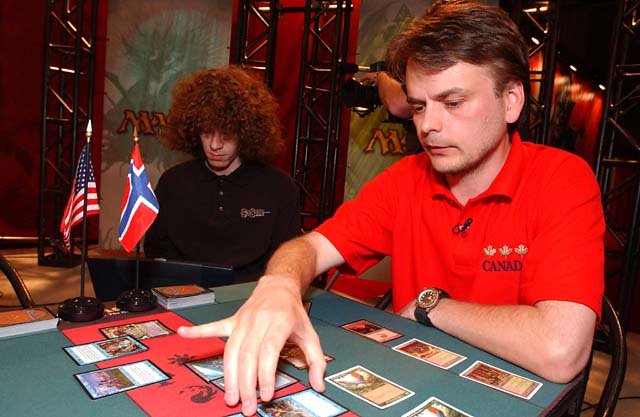 Hegstad, in turn, ran the calculus. He eventually chose to tap out for Opposition, giving his opponent one turn. Ødegaard made it a good one, tapping six and saying "Since I have nothing better to do..." doubly-kicking his Thunderscape Battlemage in an attempt to blow the game wide open.

From there, it was all downhill. He untapped and played Saproling Cluster with one mana open. He pinned Ødegaard's mana and Ødegaard made Saprolings, but even hasted, they were no threat to Hegstad's eighteen life. Hegstad stepped up production with a Spontaneous Generation for four.

Ødegaard looked at him, and said "Well, I don't want to bore the audience," extending his hand in concession.