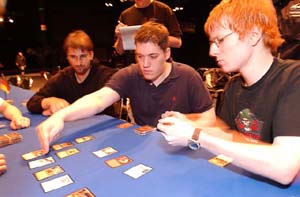 The Irish can play Standard. The Dutch can booster draft, and the Germans are great at block constructed.

But no one, not even Kai "Phoenix Foundation" Budde, can top the Americans in three-man team Rochester. At least that's how it seemed after four rounds and a playoff yesterday. Even when the packs didn't break their way, or they made significant play errors, or they were faced with superior opponents, the Americans somehow found ways to win. None of them finished in the money of the individual event, but now they are in the team finals where they have dominated over the life of this event.

In order to get here, the US had to beat Germany in the last round of Swiss yesterday. To be fair, the Germans had very little to play for at that point, as they had already accumulated the necessary number of points to secure a finals slot. The US, however, drafted and played like a bunch of caged rats, and they came out ahead in a match they were predicted to lose. That win forced a playoff with Denmark, which they narrowly won as well, and that brings us to today.

For those not paying attention, the teams:

The Germans came in with a plan. Knowing that Franz likes red/white in the C seat, especially against blue/white, they were going to try and just stick to picking blue cards in both seats B and C. Then, once Franz settled in white/red, Schneiders would jump into green.

Unfortunately, or possibly not so unfortunately, the packs dictated that Germany not mask their true strategy, and instead implement it right away. Kai opened a pack with Repel and Beast Attack as the best two cards, and just like that, Schneiders showed he was the green mage.

Given that information, the US made some quick adjustments. Franz went into blue instead of red, a better color against green. Harvey as a result, had to give up blue and went into red/green. Franz kept picking black cards, looking to go into blue against Ziegner's black/red, but he was sitting behind two blue drafters.

The German's picked up on the US shift right away, and started drafting against them. Kai took a Ghastly Demise to splash against Eugene, Felix grabbed a Dreamwinder against Franz, and Ziegner took a Whispering Shade against Ranks.

The last Odyssey pack gave Germany a second Beast Attack, and they were ahead through the first third of the draft.

In Torment, the Americans started to fight back a little. Ranks grabbed two Cabal Torturers, which are great against Zeigner's deck, plus he got the only Butcher. Eugene took a Grotesque Hybrid for a splash card, a potential game-winner against blue/white. But the biggest creature, Angel of Retribution, ended up in Kai's deck. 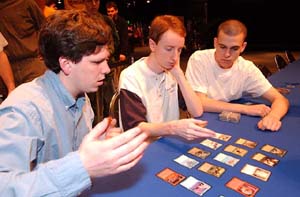 Judgment really rewarded the Germans; the first pack opened dropped a Glory right into Kai's lap, and the US had to pass a Filth to Ziegner towards the end of the draft. The Germans opened two Scalpelexis, but neither went to Schneiders, one went to Ranks and the other to Ziegner, and both will be splashing them. The cards Felix took over the 1/5's were and Elephant Guide and a Wormfang Crab, both excellent ways to punch through against blue/white.

The good news for USA was that Franz, finally settled on green, got a Phantom Centaur, which can single-handedly beat Ziegner.

When the draft was all said and done, Germany ended up with the better decks. Kai felt that it was a bad idea for Eugene to switch into red/green, and Kai plans to punish him with high-toughness creatures, fliers, and Cagemails. The Grotesque Hybrid is the one card Kai needs to worry about.

Ziegner has Filth, which is the biggest bomb ever in black on black, and has giant fatties like Masked Gorgon and Sutured Ghoul. The Centaur will be Ranks key to victory, and the Torturer's could buy him the necessary time.

Schneiders has bigger bombs in his match against Franz, but Franz has good fliers, especially once his Mystic Zealots hit threshold thanks to 2x Mental Note.