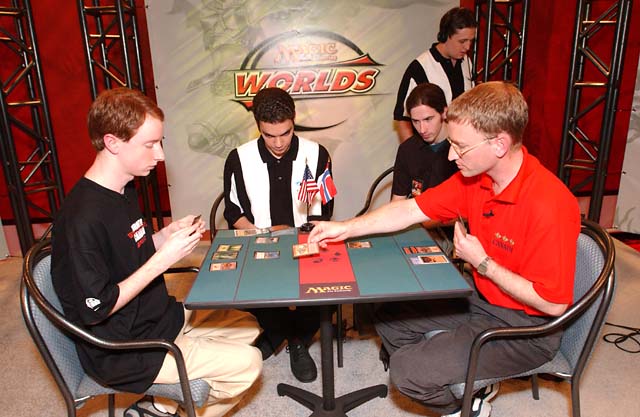 It's the final day of competition here in Toronto for the World Championships, and Norway is battling the United Stated for the Team championship, and despite the fact that the United States has won the team championships every year save one, it is still not clear who is the underdogs here: Norway and the United States both have two professional-level players and a fresh face, with Nicolai Herzog and Øyvind Ødegaard paired off against Trevor Blackwell and Brian Hegstad, and the relatively unknown J.P. Groenhof versus the only slightly less unknown American wünderkind Eugene Harvey. Harvey and Groenhof are facing off with just as much weight to their match as the other two, and for each player there is quite a considerable amount on the line, beyond just national pride.

Eugene Harvey won the die roll and elected to play first, with Eugene keeping his opening hand, while J.P. had to mulligan his hand, but kept the new one happily enough. Eugene played a forest, without a mana creature, and J.P. played a mountain and passed the turn. Eugene played a second forest and Llanowar Elf, while J.P. played a forest and cast Fire at the Elf, hitting Eugene for one as well. Eugene then played a mountain and Chimeric Idol, but J.P. showed him that nothing was safe by playing Stone Rain on the mountain after playing a second forest. Eugene didn't have another land and attacked, then J.P. played a Bird of Paradise and Thornscape Familiar. 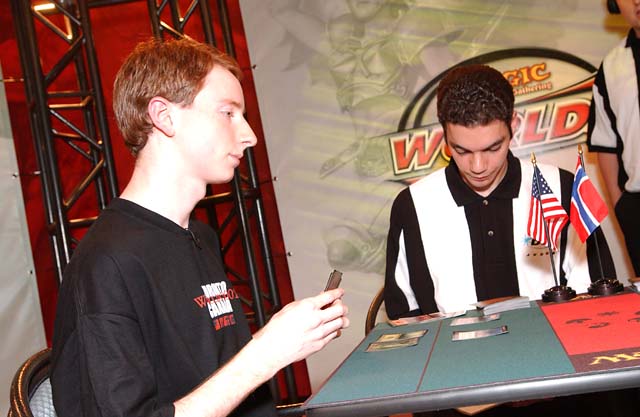 Eugene played a Birds of Paradise and attacked, while J.P. attacked with the Thornscape Familiar, then played a second copy of the bug and used Flametongue Kavu on the Birds of Paradise. Eugene elected neither to play a land nor attack, only to have J.P. play a Rishadan Port, cast Stone Rain to destroy one of Eugene's two forests, and followed up with a Shivan Wurm, returning Flametongue Kavu to his hand. Eugene drew for his turn, then conceded to the monster.

Eugene Harvey chose to play first again, and mulliganed not once but twice. Eugene started off with a forest and Bird of Paradise, to which J.P. played a mountain and Assault. Eugene played a Rishadan Port and used it to stall J.P. for a turn while he ramped up to the pocket in his mana curve, and J.P. played a Karplusan Forest and nothing else. Eugene played a mountain and Chimeric Idol, and J.P. played a Stone Rain on the Rishadan Port, while Eugene then played a Karplusan Forest for himself and cast Fires of Yavimaya, then attacked with the Chimeric Idol. 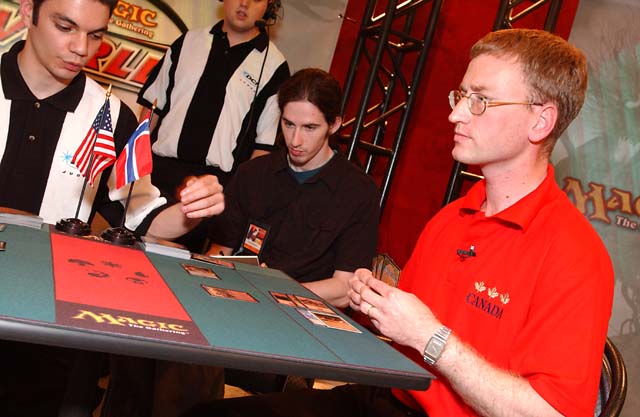 J.P. followed up with another Stone Rain on his next turn, knocking off the Karplusan Forest, and Harvey got to attack again, though he still had not made another play since playing Fires of Yavimaya, thanks to J.P.'s mana denial effects. J.P. answered the attack with a kicked Skizzik, which then attacked Harvey immediately. Eugene held off his attack, while J.P. played the Shivan Wurm again, returning Skizzik to his hand. Eugene played a forest, but kept the Idol back of course, while J.P. Pillaged the mountain, and played Veteran Brawlers after attacking with the Shivan Wurm. Eugene had nothing to do at all, and so when on his next turn J.P. played a Tectonic Break for 2, destroying both of Eugene's remaining lands, Eugene was forced into concession once again.