The Extended part of the Team Finals at the World Championships saw Austria’s Bernhard Lehner bringing All-In Red to the table, while Zhiyang Zhang of China had a nice Tezzerator list. Zhang beat the All-In Red list run by Germany earlier in the competition, so he had to be feeling good about his chances against Austria, even if they had seen his list and could play around his tricks like Mana Tithe.

Lehner led with Mountain, Chrome Mox imprinting Seething Song, then cast Rite of Flame and a Blood Moon. All those cards, and Zhang had an Island as the first land. Admittedly the Ancient Den that followed it became more than averagely mountainous, but it was unclear how much burning all those cards did to hamper Team China. 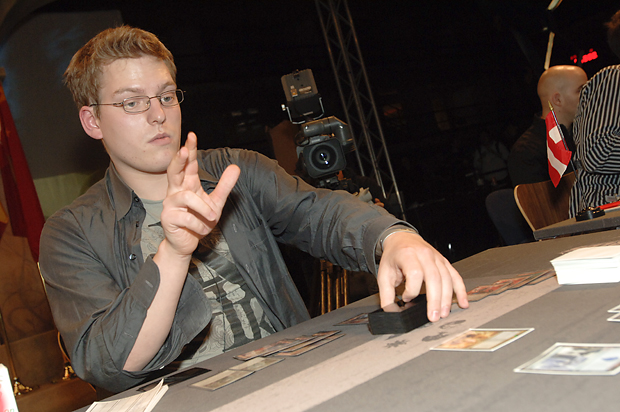 Bernhard Lehner was All-In on his Extended strategy.Engineered Explosives for zero blew up Chrome Mox on Lehner’s side of the board, before one for China (imprinted to white) allowed Tezzeret the Seeker. The first artifact found by Tezzeret was Thopter Foundry. While All-In Red was not doing a great deal, China’s Thopter Foundry combo got put together when Sword of the Meek was cast.

At the point that Tezzeret fetched Time Sieve, Lehner scooped it up. Zhang could make five tokens a turn quite easily, then sacrifice them to the Time Sieve each turn, effectively taking all the turns from then on. Without a turn, it wasn’t possible for All-In Red to do its thing.

The shuffling for Game 2 took longer than the first had, and while it was taking place it became clear that Extended was the format where things were moving the fastest. Standard was a bit slower, but China had managed to take the first game there too. At the other end of the table an Ad Nauseam was in the process of winning Game 1 of Legacy for Austria. China was ahead, but there was a lot of play in the Finals yet.

The second game again saw a turn-one Blood Moon from Lehner, along with a Chalice of the Void on zero to prevent any use of Chrome Mox to fix mana from Zhang. Zhang’s start was pretty slow, playing lands and passing. When Lehner tried for a Demigod of Revenge, it got hit by a Mana Leak after the graveyard trigger had passed. Zhang resolved a Sword of the Meek, and looked on as a Magus of the Moon came down and commenced attacking.

A Figure of Destiny was the next attacker from All-In Red. It gradually got levelled up, and soon prompted an Engineered Explosives set to one from Zhang. Magus of the Moon took Zhang to single digits as 8 became 6, then a second Magus of the Moon entered the battlefield. That moved 6 to just 2 and Zhang had one more turn to pull things out. He didn’t find the answer.

If the first two games were anything to go by then the decider in Extended was likely to be quick. It seemed that both Austria and China had picked quite quick decks for some of their formats, which had the added benefit of meaning that if their pilots finished fast, they could provide support to teammates more easily. 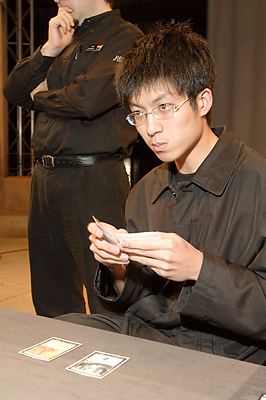 Was China’s Zhiyang Zhang capable of holding off Austria in Extended? Lehner took a mulligan on the draw, while Zhang was happy with his seven. A Misty Rainforest was the start from Zhang, while Lehner led with a Mountain and a sigh. After a little conferring, down came a Chrome Mox imprinting Desperate Ritual. A second Chrome Mox imprinted Simian Spirit Guide, which allowed Magus of the Moon. Now it was Zhang’s turn for a little conference. Misty Rainforest got sacrificed for a Hallowed Fountain in response, which came down untapped and floated white mana. White mana allowed for a Path to Exile on Magus of the Moon. Lehner was now down to just one card in hand, and without much to show for it except quite a bit of mana production.

Each player stuck with a draw, go plan for a few turns, until Zhang played Meddling Mage naming Blood Moon. A Magus of the Moon again got hit by floated mana and Path to Exile from Zhang, who commenced a slow beatdown with just a 2/2. Engineered Explosives set to zero destroyed the two Chrome Mox on the battlefield for Lehner, but as he already had five lands, this was less critical than it might have been earlier in the game.

Zhang cast Thopter Foundry, along with a new Engineered Explosives for zero. Attacks from Zhang’s Meddling Mage continued, while Lehner sat largely passive in the game, building up cards in hand for a big turn.

The big turn began with Seething Song, which resolved, and a Magus of the Moon, which met Mana Leak. Lehner used the mana he had floating and one more to cast Seething Song in order to pay. A Mana Tithe forced Lehner to tap his last mana. This meant another Mana Tithe could stop the Seething Song. At the end of all this Magus was countered by Mana Leak.

Eager to shorten the clock on the game, Zhang sacrificed Engineered Explosives and a Seat of the Synod to make Thopter tokens with Thopter Foundry. Attacks took Lehner to 8, before another Engineered Explosives for zero came down. Lehner tried for a Demigod of Revenge. China was down to one card in hand, and had no responses. All-In Red wasn’t the only deck to be able to throw down it seemed as Zhang sacrificed all the non-creature artifacts on the battlefield to create tokens, and attacked with a total of five of them plus Meddling Mage. One Thopter was blocked, leaving only 2 damage left to deal to take the game.

Lehner used Rite of Flame to cast Empty the Warrens for four Goblin tokens. Zhang looked a little quizzical. Those Goblins would not be able to stop his team... what was going on? He used a fetch land to get a source of black mana, and cast Thoughtseize. All that was in Lehner’s hand was a Mountain. The Austrian extended his hand. He was defeated.

Zhiyang Zhang wins the first leg of the team competition, putting China 1-0 up in the match! 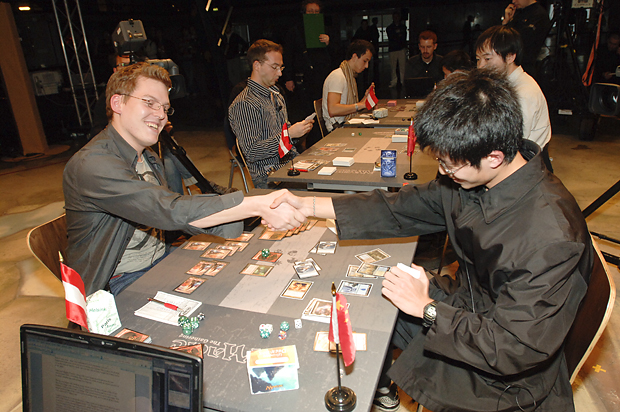