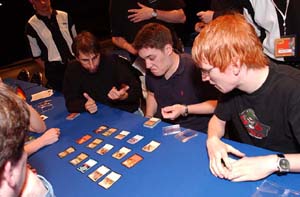 After an against-all-odds, horribly cliché yet unbelievably real 5-0 run in yesterday's Team Rochester Draft rounds, the United States team has found itself where no one expected them to be- in the Finals against Germany. This is somewhat fitting, as the Germans were aiming to do everything in their power to keep the Americans out. They had the chance to shut out the Americans by beating them, and lost. From there, if Germany had played against Denmark in yesterday's final round, they would have conceded to put Denmark in the finals and make it impossible for the Americans to make it in. Germany didn't mind conceding in that scenario since they were already a lock for Sunday. Luckily, the fate of the Americans was placed in their own hands, and they played Denmark for the right to play here today. In a nail-biter of an ending, Franz discarded Glory in the third and deciding game to attack for the win.

All that's left in the way for the Americans to keep the tradition of their country's dominance in the team event of Worlds alive and well is the German team they already beat. Could they do it a second time, or would the incredible comeback story fall one match short?

Schneiders' Hapless Researcher was matched by Franz' Mystic Familiar, which wouldn't have to wait long to grow thanks to an early Mental Note. The Researcher was sacrificed, discarding Defy Gravity, and Schneiders summoned Wild Mongrel. Stupefying Touch drew Schneiders into another card, accomplishing nothing relevant on Mystic Familiar. Franz improved his side with Militant Monk, and Schneiders played Krosan Restorer. A second Militant Monk made the ground even, while the Familiar kept attacking for a point of damage each turn. On end step, Schneiders cast Beast Attack, but Franz was waiting with the perfect answer- Syncopate. The German then took his turn and tapped all his mana for Crashing Centaur. Franz countered it with Rites of Refusal, discarding a plains. This brought him to six cards in graveyard. Nantuko Disciple gave Schneiders a great threat, and Franz put on more pressure by using Guided Strike on his Familiar to achieve threshold and deal three damage total. This was followed by Aven Cloudchaser, giving Franz a four damage clock in the air, with the exception of the Defy Gravity in Schneiders' graveyard.

Breakthrough for three gave Schneiders threshold, as he discarded three lands and Phantom Tiger. This was followed by Forcemage Advocate, which was definitely bad news for Franz, who had three lands in his graveyard and needed to keep threshold if he wanted to win the race. His Cloudchaser and Familiar attacked, so Wild Mongrel Defied Gravity and became 4/4 with the help of the Disciple. Battlewise Aven gave Franz another flier to replace his recently deceased one. Elephant Guide turned Wild Mongrel into an absolute monster, and Forcemage Advocate made it bigger. Two cards were discarded to pump it even more, one of which was a second Beast Attack. Schneiders had a dominating team on the ground, but Franz was able to stall it out long enough and outrace in the air to take the first game. 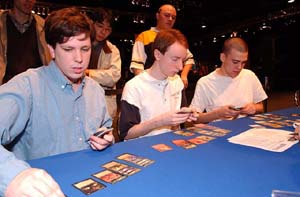 Schneiders started with Careful Study, discarding a land and Beast Attack. Franz had a first turn play of his own- Benevolent Bodyguard. The next turn saw Schneiders play Compulsion, and Krosan Restorer was summoned on the following turn. Mental Note put two lands in Franz's graveyard, and Militant Monk improved board position slightly. At this point, Ranks had lost his match. Aven Cloudchaser destroyed Compulsion, and Beast Attack was flashed back on end step. Hydromorph Guardian and Basking Rootwalla added to the team, giving Schneiders a clear advantage on the board. Franz played Deep Analysis, hoping it would provide some answers. Coral Net targeted the Beast token, but that was stopped thanks to Schneiders' Guardian. The German then attacked for six damage with the Rootwalla and Beast (one point prevented by Monk), and summoned Wormfang Crab. Franz chose to take out the Beast token.

Aven Cloudchaser attacked for two, and was joined in the sky by Aven Windreader. The game now went to race mode. The Crab got through for two damage, and Wild Mongrel made things a bit more scary on the ground. The Windreader and Cloudchaser dealt five, bringing Schneiders to seven. A second Cloudchaser was summoned, representing lethal damage in the air next turn. Schneiders had no answer, evening the score at 1-1, with Budde vs. Harvey as the deciding match.