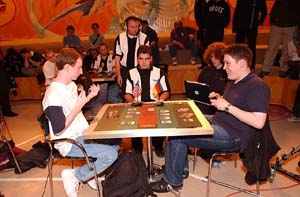 This was hardly the finals people were predicting for the team event, but now that the U.S. has shown that they can Rochester draft like nobody's business it seems only fitting that these two National Champions should sit across from each other on the finals stage. Budde was brimming with his trademark confidence. Harvey remained quietly focussed.

Budde flashed Glory as he shuffled up, a not-so-subtle reminder of its backbreaking power. Harvey won the die roll and chose to play.

Harvey started strong with Wild Mongrel. Budde was ready with Cagemail, stopping it in its tracks. Harvey's next play was Ironshell Beetle, armoring itself up.

"Well, that was a pretty good draw without the Cagemail." - Kai Budde

Budde dropped Shieldmage Advocate, and Harvey wasted no time madnessing out a Fiery Temper to kill it. He swung, and added another Beetle, and then a Skyshooter. Budde played his fourth land and passed it back.

Harvey knew something was up. He smashed in with all three. Budde played Teroh's Faithful, surprising no-one, and stood it in front of the Skyshooter. Harvey trumped it with Muscle Burst. Budde played a Mirror Wall and passed it back.

Harvey Reckless Charged his Skyshooter and Beetle, swinging with all three. Budde, at fourteen, chose to take nine and kill the uncharged Beetle. Phantom Nomad steadied his defences. Just like that, Harvey was out of gas. Budde ripped his fifth land and dropped Glory.

Harvey continued to press with Arcane Teachings for his Beetle. Budde was at the ready with Floating Shield, choosing red and getting rid of the Teachings. He was pinged to four. Glory hit for three.

Harvey added nothing to his board, while Budde smashed again with Glory, and summoned an Aven Smokeweaver to compound the difficulty. Harvey answered with Pardic Lancer. Budde hit for three more and made a Border Patrol.

Finally, Harvey found a swamp, enabling his Grotesque Hybrid, one of the few cards Budde feared. Budde dropped him to eight with Glory. Harvey pitched and attacked with the Hybrid. Budde Repelled.

"How can you draw all your good cards in every match we play?" - Kai Budde

Budde's next attack brought Harvey to five, since it would be sheer madness for Harvey to put Glory in the graveyard before he had to. Budde studied the board intently. Eventually he sacrificed his Floating Shield to get it back with Auramancer. Then he summoned a Phantom Whelp before passing it back. Harvey, as expected, dropped the Hybrid again.

Budde drew and went for his mana. He targetted the Glory with Floating Shield. Harvey let it resolve, and Budde paused. Which color should he choose. He decided to give it protection from Green. Glory attacked. Harvey pitched a forest to his Hybrid and took it out of the sky.

"Discarding Krosan Reclamation would be nuts, by the way." - Kai Budde

Harvey didn't like his way. Budde made sure he knew why.

"It's going to be a Glory attack next turn. Three of your creatures won't be able to block." - Kai Budde

Harvey pushed his Lancer and Beetle into the Red Zone. Budde examined the possibilities. He shook his head and muttered to himself as he worked it out. Surely Harvey didn't have anything. He'd seen the draft. He just had to go over the picks in his head. 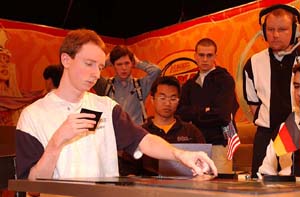 He made a tentative decision, then caught himself and made sure the Border Patrol helped the Aven Smokeweaver block the Pardic Lancer. The Mirror Wall ended up in front of the Beetle.

Harvey waited until the blocks were final, and then scooped.

At this point, the match was held, as Ranks had triple mulliganed in his second game to lose the match to Ziegner, and Franz had just taken the match against Schneiders. Everything rested on the outcome of this match. Harvey would play first. Neither player mulliganed.

Harvey's beatdown wasn't as ridiculous this game, with just a Cartographer to follow up. That was good news, as Budde had no fourth land. Angelic Wall stood in the way. Harvey tried Pardic Lancer. Budde pulled another island to enable Aven Smokeweaver.

Harvey swung in with Cartographer. Budde forced out the Muscle Burst by blocking with Angelic Wall. His next draw of Pay no Heed mocked him, not that it wasn't still gangbusters. Aquamoeba joined his team.

The Cartographer attacked again, and Budde ate it with his Smokeweaver. He stopped the Beetle from finishing it off with Pay No Heed. Swamp hit the board but wasn't joined by Grotesque Hybrid. Budde allowed himself a sigh of relief.

"I don't like swamps on your side of the board." - Kai Budde

Budde swung in for two with the Smokeweaver and dropped Cagemail on the Lancer. Next turn he drew the additional land needed for his Border Patrol. Harvey had nothing to add to the board. Soon he was at thirteen. Far Wanderings thinned his deck somewhat. 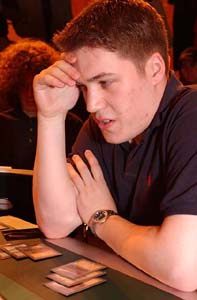 Finally Harvey found a Mongrel. Budde answered with a very boring Auramancer. The Mongrel attacked, and Budde put the Border Patrol in front of it. Harvey pitched two lands and a Rootwalla, attempting to finish it off with the Beetle. Budde pitched Glory to his Aquamoeba and activated it to make the save. Flaring Pain stepped in to make sure the Patrol died. (Later it would be pointed out that the activation of Glory would make the Patrol an illegal target for the Teachings'd Beetle, meaning it should have survived. This was overlooked in the thick of things.)

Budde dropped his seventh land and Angel of Retribution. Between his position in the race, his two fliers, and the Glory in his graveyard, it only took one draw step before Harvey conceded. Immediately Schneiders and Ziegner mobbed him, along with many other well-wishers. The U.S. Team stepped up, and all six members exchanged handshakes and congratulations. It had been a hell of a run, but the day belonged to Germany.