In the Legacy match of the Worlds team finals, Austria’s Thomas Rozhon faced China’s Bo Li. Austria had struggled so far in the team rounds of the tournament, with a record of only 3-2, but the strong individual records put up by all three members of the Austrian team ensured their place in the top four team playoff on Sunday. Rozhon’s 11-7 record was an integral part of that. On the other hand, the Chinese team got there on the strength of its performance during the team rounds, in which they were 5-0. They would not likely have earned that without Li, whose dominating 5-0 performance in Legacy belied the fact that he had never played the format prior to the weekend. 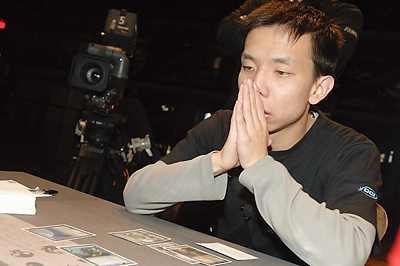 China’s Bo Li brought Fish to battle Legacy. Rozhon was playing Ad Nauseum Tendrils, a combination deck that uses fast mana like Dark Ritual and Lotus Petal to power out huge Tendrils of Agony. Li was playing a Merfolk deck, which uses counterspells and other disruption to back up a force of little blue creatures. Rozhon would need to power past Li’s disruption with either speed or brute force. The central card of the matchup was Ad Nauseum, a card that threatened to give Rozhon all the resources he needed to push his combination past Li’s counterspells. Rozhon would likely need to resolve it to win, and Li would do everything he could to stop that from happening.

Li mulliganed to six on the play. Rozhon kept seven.

Li played only an Island on his first turn. Rozhon did better, with a Duress off an Underground Sea revealing Daze, Daze, Standstill, Mutavault, and Wasteland; he took the Standstill. Li used the Wasteland immediately to kill the Sea. Rozhon replaced it with a Wasteland-proof Island that he found with a Polluted Delta. Li again had nothing better than a land, this time a Mutavault. Rozhon also played a second land, using a Flooded Strand to find a second Underground Sea that he used to cast a Sensei’s Divining Top.

“Let me think,” Li said. After doing so, he used his two Dazes to stop the Top. He untapped and played a Cursecatcher, his first creature of the game, and not one that put significant pressure on his opponent by itself. The play left Li with only two cards in hand. Rozhon sensed weakness but could not capitalize, and once again passed the turn with no play.

Li’s Cursecatcher pecked for its first damage, then was joined on the battlefield by an Umezawa’s Jitte. On his turn, Rozhon looked wanly at Li’s lone card, but did nothing more than Ponder. While Rozhon considered the three cards, Li’s teammate Zhiyang Zhang won the first game of his Extended match, putting the Chinese team up a game.

“One card?” Rozhon confirmed again, incredulous at his inability to combo during his opponent’s stumble. He chose to keep the Ponder cards on top, then cast Thoughtseize to see the one card left in his opponent’s hand. Li’s Lord of Atlantis headed to the bin, leaving him with no cards. Undaunted, Li gave his Cursecatcher the Jitte and attacked, hoping for the best.

The best was not to come, however. Rozhon finally made his move with Lotus Petal, Cabal Ritual, and Ad Nauseum with one mana to spare for the Cursecatcher. Rozhon stopped after fifteen cards, then unloaded them all on his helpless opponent. Three more Lotus Petals, two Chrome Moxes, two Lion’s Eye Diamonds, a Dark Ritual, two Cabal Rituals, and one Duress later and there was a lethal Tendrils of Agony pointed directly at Li.

Li was down a game, but his teammate Wu Tong had won his first game of the Standard match, putting China up a game in the other two matches.

Once again, Li mulliganed and Rozhon kept his seven.

For the second game in a row, Li failed to cast a creature during his first two turns. Rozhon Brainstormed on his first turn, but the Flooded Strand that he tried to follow it up with met a Stifle. Rozhon used a Chrome Mox imprinting a Dark Ritual to cast Thoughtseize, which revealed Spell Snare, Daze, Silvergill Adept, and Island. He took the Silvergill Adept, and the players spent a few turns doing nothing more than drawing and playing lands. In the middle of these turns, Zhiyang Zhang scooped up his cards after losing Game 2 of the Extended match. 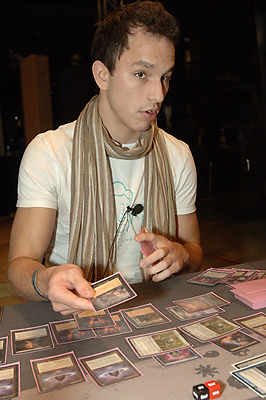 Austria’s Benjamin Rozhon was trying to combo his way to the title. Li finally broke the standstill with a Merrow Reejerey, which he nervously tapped out for. No punishment was forthcoming from Rozhon, however, so Li followed it up with a Wake Thrasher next turn that, thanks to the Reejerey, untapped an Island to give Li the ability to cast a Spell Snare if needed.

Rozhon was now under serious pressure and needed to go off soon, or die to the Wake Thrasher. He had at least two turns to play with, and he decided to wait rather than try to force his way past a Daze and a Spell Snare with only five cards. Li sped up his clock with a Lord of Atlantis, and hit for 11. As expected, Rozhon had only one more turn. What would he do with it, and would it be good enough to get through the Spell Snare and Daze that Rozhon knew his opponent had?

He Mystical Tutored in his upkeep, searching for an Infernal Tutor. While they shuffled, Wu Tong lost Game 2 to Benedikt Klauser in the Standard match.

Rozhon tried to start his big turn with a Thoughtseize. It revealed Spell Snare, Spell Snare, Mindbreak Trap, and Daze. That was too much for Rozhon to get through, and he conceded rather than make a futile effort.

At this point, all three matches were shuffling for Game 3. Li and Rozhon shared a laugh about sweating under the lights before presenting their decks for the third game.

It was Rozhon’s turn to mulligan. Li kept his seven.

Rozhon only had one Island and a Sensei’s Divining Top to work with. He activated the Top once before passing. Li made a big move on his turn, attacking for 7 with two Silvergill Adepts, Mutavault, and Cursecatcher. That attack put Rozhon on 7, and gave him only one more turn to work with.

When Rozhon tried to activate Sensei’s Divining Top after untapping, Li Stifled the activation. Rozhon’s next spell, Lotus Petal, met a Daze. Rozhon cast another Lotus Petal, then a Chrome Mox imprinting Thoughtseize. He used the Mox to cast Dark Ritual, then used one mana from the Ritual to activate his Top. He found nothing, and conceded.

While the players packed up their cards, they discovered that in their focus they had not noticed when Zhiyang Zhang, China’s Extended player, won the third game of his match. Bo Li defeats Benjamin Rozhon 2-1, clinching China’s victory in the 2009 National Team Championship! 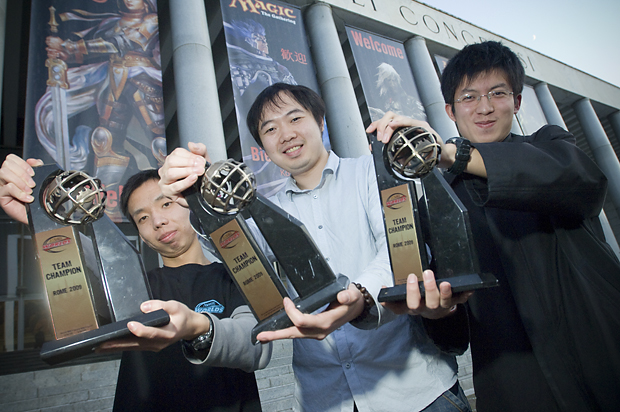