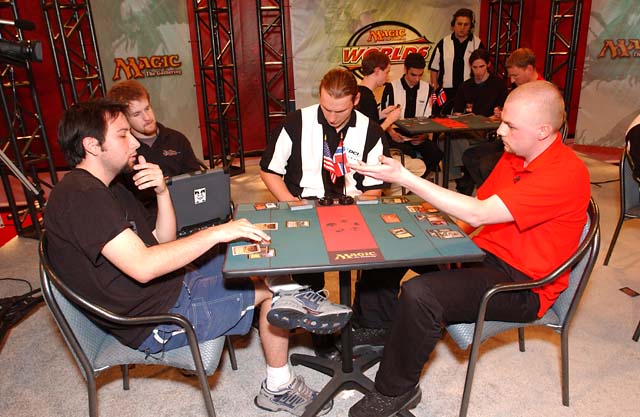 Both of these teams started off with 6-12 records, but did significantly better in the following days, which led them to the finals. The interesting thing to note is that the 6-12 records occurred on the Standard day, and the team finals is Standard. Team Norway and Team USA will be playing with the same exact decks that provided disappointing finishes for them. Nicolai Herzog went 2-4 with his Standard deck, which actually gives him the edge on Blackwell's 0-6 performance on Day 1.

Herzog won the die roll, and chose to go first. Both decks had a relatively slow start, and the first non-land card to be played was Herzog's Plague Spitter, which Blackwell killed off on end step with Fire. The next turn saw Herzog play Dark Ritual, which allowed him to summon Crypt Angel on turn four. Blackwell answered back with Blastoderm. The Angel attacked for three points on Herzog's turn, while Blackwell swung for five with Blastoderm. Blackwell followed up by summoning Thunderscape Battlemage with black kicker. Herzog discarded two Terminates, and was left with one card in hand. All was not lost, as Herzog played Persecute on green. This forced Blackwell to lose the Spiritmonger he had been holding, but Flametongue Kavu and Fire/Ice stayed put. This wasn't a Persecute of Finkel/Benafel US Nationals 2000 proportions, but it at least dealt with an otherwise menacing fattie.

Regardless, Blackwell was still in a great position. He shot down the Angel with Flametongue Kavu, and attacked with his team for seven. The following turn resulted in an attack for eleven, giving Blackwell the first game. 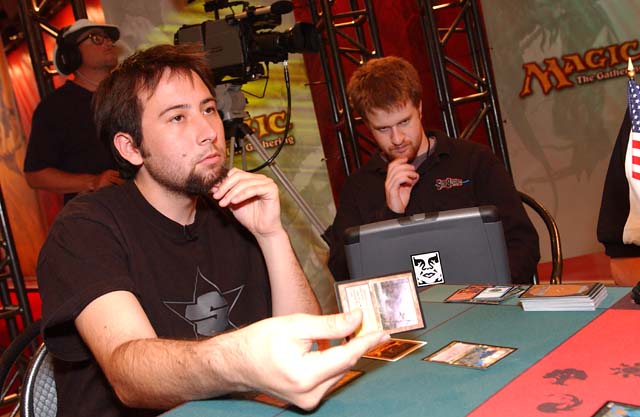 Herzog cast a first turn Duress, forcing Blackwell to lose a Terminate. The only other card Herzog could have picked was Fire/Ice, and the rest of Blackwell's hand was filled with creatures. Llanowar Elf was now played by Blackwell on his first turn, and Herzog killed it with Vendetta on his turn. Blackwell then played a Port, and used it on Herzog's upkeep. Herzog used Dark Ritual to play Persecute on green, causing Blackwell to discard two Blastoderms and Spiritmonger. This left Blackwell with merely a land and Fire/Ice in hand. Fires of Yavimaya was drawn and played by Blackwell on his turn, who was going to need some great topdecking to pull this one out.

Even though Blackwell's hand was stripped, Herzog was unable to take advantage of the situation, as he did not play any spells after the Persecute for the next few turns. He eventually played a second Persecute on red, which caused Blackwell to lose his hand, which consisted of two Fire/Ice. Herzog played Addle on the next turn and was hoping to get a green card, but merely saw a land. Blackwell's Port was keeping Herzog from getting a fifth mana source, which he needed to play most of his bigger creatures. Herzog finally drew one, and Crypt Angel came out.

At this point, Herzog had no cards in and, and was stunned by his topdeck: Skizzik. It came right out and attacked with the Angel twice, giving Herzog the game once Blackwell realized he could not survive another attack.

At this point, Eugene Harvey had lost his match against Jan Pieter Groenhof, and Blackwell would need to win this game, or Norway would win the team title. 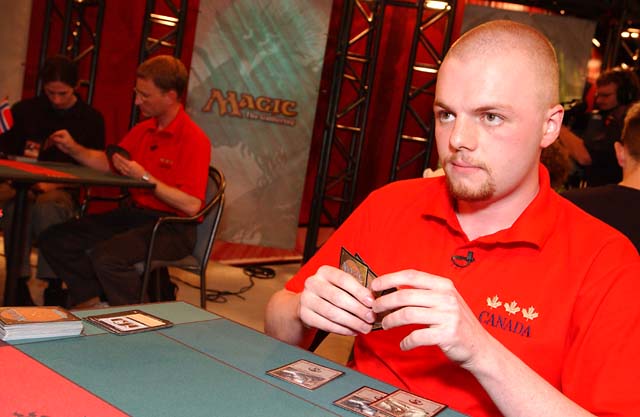 Blackwell went first, and started off with Birds of Paradise. Herzog had his own first turn play as he cast Duress. He saw Blackwell's hand, which included two Fires of Yavimaya, Fire/Ice, Terminate and Rishadan Port. Terminate was removed from Blackwell's hand. Fires was played by Blackwell on the following turn. Neither player cast anything during the two following turns On Herzog's upkeep, Blackwell used Rishadan Port and Ice to tap down two lands. Herzog used Vendetta to kill the Bird in response. Blackwell summoned Spiritmonger on turn five, and it attacked right away for five damage. Herzog answered back by playing a kicked Skizzik, bringing each player to eleven life. It seemed that a race might occur, but Blackwell drew and played Blastoderm, and attacked for eleven to win the game and match.